Rubble Paper, Paper Rubble was composed by visiting historical markers throughout southeast Texas and making graphite rubbings from the embossed text. At its heart, the project uses poetry to make and unmake local histories. The book also contains color plates featuring a series of alligator prints I made while in the field, and another is featured on the cover. These are prints made directly from the animal’s body, a kind of swamp treatment of gyotaku printing.

The rubbings are visual poems and landscapes that explore the musicality of the outside archive. While tracing the map of state historical markers to chart an itinerary, I started building strands of meaning in the markers I sought out. Transportation itself factored into the structure of the book. It’s a “roadside” book that captures voices only as they are passing through and attempts, out of that eavesdropping, to create a grammar of place. (“Artist Statement”)

As Texan Paul Klinger describes in the “Artist Statement” that opens his new book, his absolutely striking Rubble Paper, Paper Rubble (Austin TX: further other book works, 2013) is an incredible study of the physicality of words. Through some two hundred pages of concrete/visual poetry created through graphite rubbings, Klinger reworks the subject matter of local histories, and exposes the bare bones of the words themselves. The poems might reference specific dates, places, groups and even individuals, but are turned abstract from their meaning, and entirely concrete and situated in their execution. What are we to take from a particular page that reads: “THINLY / THE FATE / OF OTHER / NATIVE / AVOIDED / WHEN / A SPUR. / RAISED / ITS PRE- / HURRIEDLY / TO / SPIRIT / HUNTSV [.]” The author of (as he writes) “several chapbooks as a member of the Dusie Poetry Kollectiv,” he is also co-author, along with his wife, the poet and publisher Dawn Pendergast, of the chapbook Epithalamium, an ode to the unlikely marriage of Paul Klinger and Dawn Pendergast (little red leaves, 2012) [see my review of such here]. 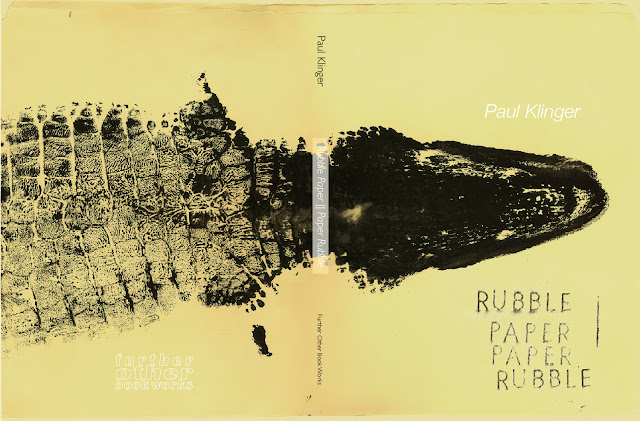 Produced as a series of overlapping texts, the book is constructed in nine chapters—Worshipful, Lumber, Hurricane, Seagoing, Conflicts, Shotgun, Pastoral, Her Ago and Cemetery—as well as “Alligator Suite,” situated between chapters five and six. Through what words Klinger selects, one could describe Rubble Paper, Paper Rubble as a variation of an “erasure” text, in that he erases simply by not choosing, and uses only the words presented to him on various historical markers. Given that part of the aesthetic of the work is a series of selected and reformed texts as graphite rubbings, it becomes difficult to replicate through type, here. As he includes in the fifth chapter: 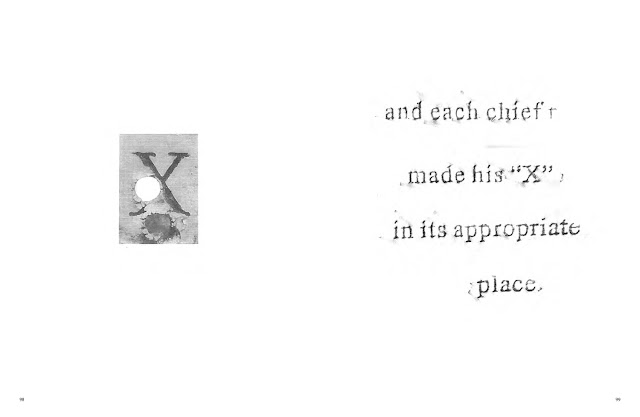 There are resonances throughout the collection with the work of the late London,Ontario artist Greg Curnoe. Throughout his career, Curnoe embraced the local, and went so far as to produce a work on the archaeological and historical facts of the plot of his land sat on, as Deeds/Abstracts:The History of a London Lot (London ON: Brick Books, 1995), as well as a book work made up of block texts, his Blue Book no. 8 (Toronto ON: Art Metropole, 1998). It’s as though Klinger has, in his own way, blended two threads from each of these titles (that he most likely has never heard of) into his collection, reworking history as language itself. This is a book that requires to be seen.
Posted by rob mclennan at 9:01 AM
Labels: dusie, further other book works, Greg Curnoe, Paul Klinger