The door opens, backlit
On a round purple rag rug mimosa mosaic

Broom propped near another mother watching
Her daughter carry a bowl of green, round

Of orange ball & bluegreen squares. At the same
Moment my mind flickers to my mother

Taking care of my daughter. I am the woman
Shadowing the doorway watching them play

Watching thy/ my mother 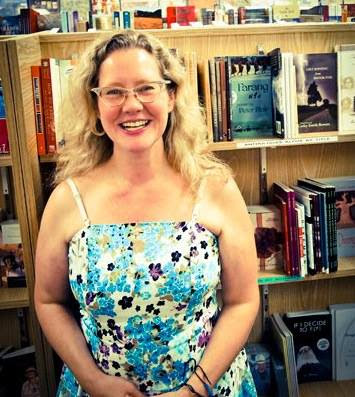 It feels as though I’d barely finished and posted my review of American poet and filmmaker Lee Ann Brown’s third solo trade poetry collection, In the Laurels, Caught (Albany NY: Fence Books, 2013) [see my review here] when another collection, Crowns of Charlotte NC ODE (Durham NC: Carolina Wren Press, 2013), appears on my doorstep. Fifteenth in their “Poetry Series,” Crowns of Charlotte NC ODE follows very much in the footsteps of In the Laurels, Caught. Where the earlier collection explored a more general territory, composed as “a collection of lighthearted, deep rooted-poems written around the Appalachian region of North Carolina in Madison County,” the focus of Crowns of Charlotte NC ODE is far more specific, exploring the city of Charlotte, North Carolina, where the author was raised. Existing as an extension and companion volume to In the Laurels, Caught, Crowns of Charlotte NC ODE is a study of Brown’s own point-of-origin, adding, with these two collections, to a tradition that includes Andrew Suknaski’s Wood Mountain Poems (1976; 2006) and Arkansas poet C.D. Wright’s ongoing work, as well as Toronto poet Sharon Harris’ work-in-progress writing Sarnia, Ontario, or my own collections writing Glengarry County, Ontario: bury me deepin the green wood (ECW Press, 1999) and Glengarry (Talonbooks, 2011). Brown explores the history, geography and people of Charlotte, North Carolina, digging deep into the language and lilt of the locals and her own family stories and archaeologies, as well as the history of she whom the city is named for, utilizing details and exploring the space.

So elegant my grandmother
So close to her father

That someone recognized her
A thousand miles away

When she brought the preacher
A cold glass of water

Brown seems to favour the song and the sonnet, as well as the ode, structures that keeps coming up in what I’ve seen in her writing. Her poems are rich with sound and rhythm, childhood recollection, historical anecdote, the music of John Coltrane, juvenilia and a deep, abiding love. Sound, song, rhythm and speech play integral roles in poems such as “ACOUSTIC WINTER,” “CAR CONVERSATION,” “HOMECOMING” and “‘SCUSE MY BOARDINGHOUSE REACH,” running deep throughout the whole of the collection. As the first stanza of “BALLAD OF WINSTON-SALEM” reads:

One of the strongest parts of the book comes from the final sequence in the collection, the fifteen sonnet sequence, “Double Crown for Charlotte,” writing directly around Charlotte of Mecklenburg-Strelitz (1744-1818), including the rumours of her African ancestry. Queen Charlotte, after whom the city of Charlotte was named, was wife of the “mad king,” King George III. In each poem, Brown explores Queen Charlotte’s history, and uses the final line from each poem to open the next piece, finally accumulating in the fifteenth sonnet, constructed entirely out of these repeated lines. Through repetition, and variant usage, the repeated lines shift, alter and change weight, turning themselves around into new shapes. The sound of similar lines in a short space bring weight to the poem, and to each line, altering all that emerges around them.

The town I grew up in is feminine—
To crown us all with a laurel wreath
I saw a map early on of North and South.
A gloss written in between lines:

The greatest monarch of the north must bow
in the bedroom. King George whines:
O sing
of human DNA’s complexity—

A dog which shows its teeth but never dares
to decode a painting. One has to get close.
Who didn’t want to let go of their Queen?
Sophia Charlotte was also a painter,

but my favorite is a photograph.
Do me the favor to burn this if you love me and believe me.