the book of your coterie

I desire the robbery of my invention.

Your porcelain eternity splits the pleasure of my raze
and the golden sides from my propinquity.5

For example, I cannot wed the yellow deficiency in bloom.

For example, I devise the mimic – for fruitless took
my promising boy (oh odious despite gate)

for example,
and acceleration – the surface is fleshed out

for example,
a ripe detour (west) toward a citizen kiss

for example,
blossoms of aluminum

for example,
the line – etc., bean dark skull and succor 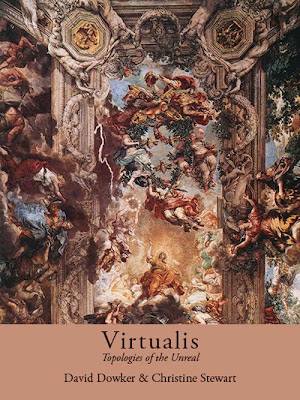 Toronto poet and publisher David Dowker and Edmonton poet and critic Christine Stewart’s collaborative poetry book, Virtualis:Topologies of the Unreal (Toronto ON: BookThug, 2013), constructed in three sections and a reading list, is a book of responses that become just as much a three-way conversation. Previous to this, Dowker is the author of the trade collection Machine Language (BookThug, 2010), as well as the editor/publisher of the late great Alterran Poetry Assemblage; Stewart is the author of a number of small chapbooks (through above/ground press, Nomados and others), and has now worked on a couple of poetic collaborations, including an early collaboration with Lisa Robertson and Catriona Strang produced as The Barscheit Horse (Hamilton, ON: Berkeley Horse, 1993). In their collaborative blend of ideas and language, the poems in Virtualis: Topologies of the Unreal work through the abstract, deliberately ungrounded, embracing sound, and allowing the theories to spark, but the words themselves to propel. “It went out, and like a woman it was happy.” they write, in the second section, “Grid Meridian.” An exploration of melancholia is easy enough to negotiate, but I suspect you might have to have some knowledge of theory to appreciate the full measure, and the back of the collection includes a list of titles under “Some Readings” that include works by Giorgio Agamben, Charles Baudelaire, Walter Benjamin, Jeremy Bentham, Christine Buci-Glucksmann, Robert Burton, Roberto Calasso, Paul Celan, Gilles Deleuze, Jacques Lacan and others. As the back cover writes, “Virtualis: Topologies of the Unreal is a poetic investigation of melancholia and the baroque. As a collaborative reading of writers such as Walter Benjamin, Christine Buci-Glucksmann, Giorgio Agamben, Gilles Deleuze, Charles Baudelaire and Arthur Rimbaud, David Dowker and Christine Stewart have created a series of linguistic interjections that run from the allegorical barricades of the baroque to the topological confound of the modern, incorporating (for example) Medusa and the Sphinx, aestivating snails and the alchemy of bees.” Their Virtualis: Topologies of the Unreal exists as a conversation and a continuous thread, as the faded phrase within each poem becomes the title of the subsequent piece, extending the poems nearly as a kind of call-and-response that require deep and repeated readings.

This is not a séance.14 Escape is not an object.

The habit of synaptics matters yet still one fumes and stares
and wonders just what kind of trees are these.

We are gathering interior circumference.

Their truth is folded into bitter distance.

They face that solemn green arousal with oblique strategies15
of psychic detachment.