Open Letter: A Canadian Journal of Writing and Theory: “Surrealism in Canada”


Importantly, for the mandate of Open Letter, we present here several articles and interviews, which break new ground in the area of critical and historical writing on Surrealism. Some of the articles explore the positioning of Surrealism within the larger context of modern literary history, exploring influences from other movements (Romanticism, Symbolism), and Surrealism’s influence on other tendencies (Oulipo, Magic Realism, Situationism). A need to class Surrealist expression is a persistent current in many of these articles and interviews, often attempting to place it inside a timeline, usually within, or in opposition to André Breton’s orbit of influence. Invaluable original research is presented here, including an exhaustive examination of the origins of Breton’s famous work Arcanum 17. (Beatriz Hausner, “What can be”) 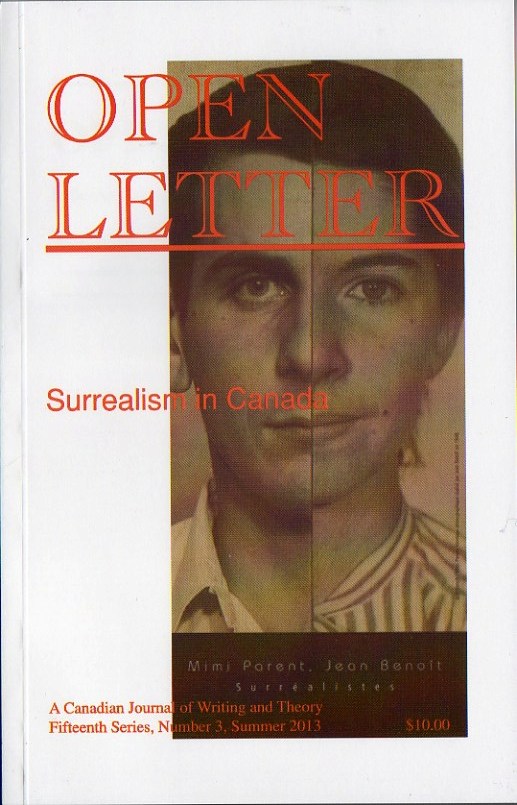 I’m not entirely sure when Frank Davey’s Open Letter: A Canadian Journal of Writing and Theory comes to an end [see the profile I wrote on the journal for Open Book: Ontario here], but it can’t be that long, now. The loss will be substantial. Until then, the most recent issue, “Fifteenth Series, Number 3, Summer 2013” is “Surrealism in Canada,” guest co-edited by Gregory Betts and Beatriz Hausner, both of whom have approached the idea of surrealism from different vantage points, including interviews, essays, poems and other materials to give an overview of some of the activity that has occurred within the boundaries of Canada over the past century. Part of the appeal of this particular issue as a whole is in the way it attempts to engage with a variety of threads of what could fall under the umbrella of “Canadian Surrealism,” from contributions on and of fiction, poetry, theatre and the visual arts by Ray Ellenwood, Peter Dubé, Lillian Necakov, Gregg Simpson, Ludwig Zeller, Karl Jirgens and Claude Gauvreau.

The Ensemble of Sleep

What night demands on Monday
sour hand half minutes
when we enter this paradise
love and arms resemble
the ear that I told you yesterday
there is not much to your street
I let my coat enter your hands
with this, amiable
all is tempered by human time
we assemble sleep
my love with fur stars
the sky above us like a drop
I reclose your many hands
and also the tents that tremble love
watch us longingly
in the ensemble of sleep. (Lillian Necakov, “Translating dead French guys”)

The collection also includes Toronto poet and critic Stephen Cain’s lengthy essay, “André Breton in Canada,” exploring the possible connections produced through and by Breton’s brief stay in Quebec in 1944, where he infamously “was inspired to write his last novel, Arcane 17, in the three months he stayed.” As Cain writes, early on in the essay:

But why did Breton come to Gaspé in the first place? There appear to be several contradictory reports but, perhaps understandably, Quebecois literary and artistic criticism has been more precise about Breton’s trip to Canada than international critics and biographers.

For some time, considerations of surrealism in Canada have been limited to relatively unrelated considerations and self-contained pockets, from Betts’ work on poet W.W.E. Ross, the Montreal Surrealists, Brion Gysin, Ludwig Zeller and the predominantly Toronto poets Stuart Ross collected (including Necakov) in his anthology Surreal Estate: 13 Canadianpoets under the influence (Toronto ON: The Mercury Press, 2007). Both editors include introductions to the collection, with Hausner’s “What can be” providing more of an introductory overview to the contents of the issue, and Betts’ “The Nonnational Boundaries of Surrealism in Canada” providing an intriguing overview of how surrealism has impacted upon and through the boundaries of Canada. As he writes, “I approach this issue and this topic not as an attempt to resurrect or invent boundaries by nationalizing the Surrealist movement, but to provide a venue for Surrealist expression and to recognize the wealth of activity that happened in and most often against these borders.” He writes:

It was not until the expats and exiles began seeping into French Canada while avoiding the war over there that the essentially and metaphysically disruptive implications of Surrealism revealed itself here. Borduas, Pellan, Renaud, Leduc, les frères Gauvreau, Sullivan, and all of the other stalwarts of the first active generation of Surrealists in Canada knew very quickly that they had tapped into a powder keg. Unlike in Toronto, the weird abstractions and nonrepresentational experiments in art (including literature, theatre, painting, dance, and music) were recognized as a disruption of reason, which was recognized by revolutionary artist and reactionary critics alike as an affront to God and country. It took a more Catholic context to make that link (and also one far more aware of the Paris scene). In the beginning was the word; the logos, the divine word. But the Greek term ‘logos’ does not just translate as the English ‘word’: it marks the reason and the divine ratio that keeps the universe in balance. If nothing else, Surrealists have always been unreasonable. Thus Borduas decreed in the founding manifesto of the Montreal Automatists, “To hell with holy water and the French-Canadian tuque!” (30). If rationalism and nationalism were the problem behind burning Europe, prudish Canada, and fascist Quebec, then the Surrealists would turn to irrationalism and nonnationalism as antidote.