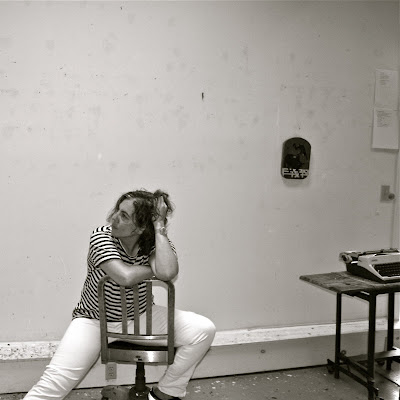 Stacy Szymaszek was born in Milwaukee in the summer of 1969 and grew up there. She studied at the University of Wisconsin-Milwaukee, graduating in 1991 with a BA in Literature. She is the author of the books Emptied of All Ships (2005) and Hyperglossia (2009), both published by Litmus Press, as well as numerous chapbooks, including Pasolini Poems (Cy Press, 2005), Orizaba: A Voyage with Hart Crane (Faux Press, 2008), Stacy S.: Autoportraits (OMG, 2008), from Hart Island (Albion Books, 2009) and austerity measures (Fewer and Further, 2012). From 1999 to 2005, she worked at Woodland Pattern Book Center in Milwaukee. In 2005, she moved to New York City, where she is the Director of the Poetry Project at St. Mark's Church.

1 - How did your first book change your life? How does your most recent work compare to your previous? How does it feel different?
Kate Greenstreet asked me a similar question in 2006, just 1 year after Emptied of All Ships was published (http://www.kickingwind.com/5406.html) and those comments still hold up for me, yet 7 years later my feeling about the event is much stronger. Publishing that book was a cornerstone in the building of my public life as a poet, becoming a public figure. I would also add that the support of Litmus Press (who also published my second book) and Tracy Grinnell as a close reader of my work has relieved me of a lot of worry. It has been a life changing to have this level of trust with a publisher.

The main difference is that while I still try to let my work be ear-driven, this newest manuscript is less concerned with words as objects, a less painterly approach, less spare.

2 - How did you come to poetry first, as opposed to, say, fiction or non-fiction?
I first came to writing in 6th or 7th grade when my religion teacher asked us to keep a journal. I guess the idea was to write about what we were learning in the bible, our feelings about God, but it became my first experience of the page as a (supposedly private) place where I could articulate my rebellion. My writing didn’t take the form of poetry till I was 18, and it felt like finding out that I had the key to this one door. It was poetry because it was poetry. I was very interested in psychology and obsessed with self-transformation. I started college as a psych. major when this particular writing class swept me away (complete with crush on an older classmate) and the thrill and challenge of how to make a life as a poet. Re: why not fiction – psychic experience seemed best modeled through language fragments. My understanding of sentences at the time was that they were too linear to get at what I wanted.

3 - How long does it take to start any particular writing project? Does your writing initially come quickly, or is it a slow process? Do first drafts appear looking close to their final shape, or does your work come out of copious notes?
I don’t have a lot of down time between manuscripts. One thing leads to the next fairly quickly and instinctively. I generally don’t do a lot of editing. I need to get it “right” before I move on so I’ll sit with a challenge till I figure it out.

4 - Where does a poem usually begin for you? Are you an author of short pieces that end up combining into a larger project, or are you working on a "book" from the very beginning?
Everything I’ve written so far has been conceived of as a book.

5 - Are public readings part of or counter to your creative process? Are you the sort of writer who enjoys doing readings?
I enjoy giving readings and find them useful for figuring out what’s working and what’s not. Reading from “Journal of Ugly Sites” has been especially gratifying because I’ve felt the audience with me in way I haven’t before. It’s parts of my life through an ugly lens; death/loss, things going wrong with my body, situations at home, at work, in the world – it feels risky to put it out there, but it’s also comedic and I like to deliver it kind of like a monolog. I want to dare you to relate to me. When the audience recognizes this, it’s an adrenaline rush. I don’t even get those when I work out at the gym.

6 - Do you have any theoretical concerns behind your writing? What kinds of questions are you trying to answer with your work? What do you even think the current questions are?
Is death a theoretical concern?! My work is about my mortality. I’ve been thinking about my autobiographical investment, which originated in self-portraiture. I’ve been reading the second volume of Susan Sontag’s journals—she avoided writing autobiographically because she wasn’t convinced that her tastes were exemplary, (really?). For me, that’s a hook, knowing that I’m ordinary, but finding that interesting, or finding a way to present myself that’s compelling. Sontag wrote that only a fraction of her was available to be turned into art. I feel like most of me is available, but then, what really is the value of autobiography? I want to answer that in my next work using text and images.

7 – What do you see the current role of the writer being in larger culture? Does s/he even have one? What do you think the role of the writer should be?
I feel weary just reading this question. What just came to my mind is what Pasolini said in his last interview, the day before he was murdered, “Everyone knows I pay for my experiences in person.” I don’t like generating controversy for controversy’s sake but I do like poets taking risks in work and life that impact personal comfort. I think our intelligence and facility with language is very powerful and threatening to power structures that are so reliant on mass mind control. Poets restore meaning to words (I think Oppen said that?). I think my role is to bear that in mind, and to work my hardest to keep an important venue going so we have a public forum to be heard.

8 - Do you find the process of working with an outside editor difficult or essential (or both)?
I’ve only worked with Tracy Grinnell in this context and it has been insightful.

9 - What is the best piece of advice you've heard (not necessarily given to you directly)?
“Walk into your power.”

10 - How easy has it been for you to move between genres (poetry to fiction to critical prose)? What do you see as the appeal?
Even when I’m writing something that looks like prose I think it’s poetry so I don’t conceive of it as moving between genres.

11 - What kind of writing routine do you tend to keep, or do you even have one? How does a typical day (for you) begin?
I’m not at peace with the fact that I’m not more disciplined. I would like to be, but even with the journal I was making entries on the fly. I had always been someone who wrote at my computer, never by hand, but when I started writing Hart Island, and again “Journal of Ugly Sites,” I started using notebooks because I simply couldn’t retain the amount of material I would generate walking around, up and down 2nd Ave mostly. So I guess some bastardization of the walking meditation has been part of my process/routine. Being the Director of The Poetry Project demands as much as it affords—so one way I keep myself writing is to make the job part of the poetry.

12 - When your writing gets stalled, where do you turn or return for (for lack of a better word) inspiration?
I tend to work on 2 pieces at the same time, which require different things of me. I like to have a journal piece going because I don’t really stall out on those. I just have to look, listen, make the time to get it down. I’m a list maker, so if I get stuck I break it down to lists of any kind. Right now I have a “list of people I need to see.”

13 - What fragrance reminds you of home?
Yeast and dead alewives. And a truly horrible smell that I think emanated from a tannery.

14 - David W. McFadden once said that books come from books, but are there any other forms that influence your work, whether nature, music, science or visual art?
Definitely visual art, especially photography, and film. I have the beginnings of a manuscript in waiting that includes some readings of Pasolini’s films, especially the films where his mother Susanna appears.

15 - What other writers or writings are important for your work, or simply your life outside of your work?
I’ve named several in my answers already. I think what is important to me shifts according to what I’m working on. For instance, for the Pasolini work I’m reading some of the people he liked, like Norman O. Brown. I’m trying to think of things I read that that fall outside of my work. I think I read Georges Simenon that way, just because.

16 - What would you like to do that you haven't yet done?
I have a fantasy about writing a biography, and that I’ll receive a grant to do so.

17 - If you could pick any other occupation to attempt, what would it be? Or, alternately, what do you think you would have ended up doing had you not been a writer?
I tremble to think what I would be doing now had I not been a writer. As I mentioned earlier, I thought I wanted to be a psychologist but really there wasn’t much of a chance for me to “become” anything, I was so on the fringe, and I don’t mean that in a cool way, I mean that I came out of adolescence/young adulthood feeling like I was the living dead. Writing gave me a way to be in the world.

18 - What made you write, as opposed to doing something else?
See above answer.

20 - What are you currently working on?
I’m working on relaxing.