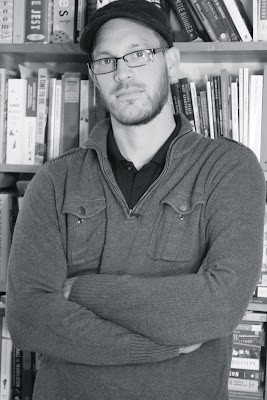 Andrew Morgan is a professor, poet, editor and volunteer whose work can be found in magazines such as Conduit, Verse, Slope, Stride, Fairy Tale Review, and Pleiades. He is the recipient of a Slovenian Writers' Association Fellowship which sponsored a month long writing residency in the country's capital city of Ljubljana, served as the Juniper Fellow at the University of Massachusetts Amherst where he facilitated the Visiting Writers Program and has worked as an Editorial Assistant for Verse as well as an Assistant Managing Editor for Verse Press. His first book, Month of Big Hands, was recently released from Natural History Press.

1 - How did your first book change your life?
Completely and not at all. Equally.

1B How does your most recent work compare to your previous? How does it feel different?
Month of Big Hands was vastly different than anything I had previously worked on and what I'm working on now is equally different from both. As far as MoBH: it was my first serious foray into a sustained prose-poem format. It was far more narrative than anything else I'd written beforehand.  Although the type and amount of imagery in the poem are fairly consistent stylistically with all of my work, I basically allowed myself the freedom to continue long enough to get somewhere different and, most importantly, allowed myself to do so without preemptively doubting that different place before I had a chance to explore its nooks and crannies.

2 - How did you come to poetry first, as opposed to, say, fiction or non-fiction?
I've always has some level of comfort writing in all three, but poetry was the first type of writing that allowed me to paint without feeling obligated to make clear that just because I'm color blind doesn't mean I can't intentionally place colors that seem odd together together…

3 - How long does it take to start any particular writing project? Does your writing initially come quickly, or is it a slow process? Do first drafts appear looking close to their final shape, or does your work come out of copious notes?
When I begin something I try to go full-on, hard as I can for as long as I can because I know that the moment I pause, I begin to judge and be self critical. I usually get about half done with a piece before I begin to realize I may be working on something. That realization is then followed by a prolonged period of fucking everything up by trying to mangle the entirety of the writing into that realized potential for "something". Largely due to the stem-to-stern keeling of this process, as desperately fast as the first drafts are (emphasis on the desperation), the subsequent drafts are equally slow.

I wrote the first draft of Month of Big Hands in two weeks. It was 140 single-spaced and marginless pages. I would say it went though five or six major rewrites over the course of a year and a half or so; although, to be honest, I was consistently tinkering with it up until the last moments before the text was locked for the printer. About 90% of what ended up in the final draft of the poem was present in that original draft. It should also be noted that only about 50% of the original draft made it to the second. That seems to hold up accuracy-wise when applied to other things I've written as well.

4 - Where does a poem usually begin for you? Are you an author of short pieces that end up combining into a larger project, or are you working on a "book" from the very beginning?
About 10% of them begin on short car rides when a phrase or a group of phrases somehow surface and stay around long enough in my head for me to make a point to remember them. I usually repeat them constantly until reaching my destination and then scurry to the closest scrap of paper. The rest do not exist in even the remotest of forms until I'm sitting before a blank white computer screen with fingers potential-energy-maxed-out-floating directly above asdf jkl; .

This is something I recently realized: I don't believe I have ever set out to write a short piece. Whenever I'm working on an initial draft of something, I'm always thinking of it as a long poem. Or, at the very least, it's potential to be a long poem. In fact, nearly all of my shorter poems represent the salvaged remnants of failed long poems.

5 - Are public readings part of or counter to your creative process? Are you the sort of writer who enjoys doing readings?
Well, this is a mixed bag. While I enjoy giving readings, because of the long-poem blinders, they often seem scattershot to me. Longer pieces bookending the "salvaged" shorter pieces. I have a series of poems I consider my "reading" poems because they seem to work best in that context. Promoting the book has been interesting because I end up trying to balance a section or two from Month of Big Hands with those "reading" pieces which only seems to reinforce the scattershotness. That and it doesn't help that while I'm comfortable in front of crowds, I'm pretty damn awkward. To me, there's not much more private than the process of writing. Think of how you might feel standing in front of a crowd of people and reading aloud your backlog of google searches. Your level of comfort with that, whatever it may be, is not about the google searches.

6 - Do you have any theoretical concerns behind your writing? What kinds of questions are you trying to answer with your work? What do you even think the current questions are?
I very much do not have theoretical concerns. I think poems are theoretical mirrors. I don't think we're honestly interested in any art unless we're questioning it on some level. In the same way, if we ever cease to question whether we're questioning enough then we're not.

7 – What do you see the current role of the writer being in larger culture? Does s/he even have one? What do you think the role of the writer should be?
For me, while I know no one who is or would consider themselves solely a writer, the role of a writer is to write. The moment s/he consciously works to do more than that s/he's a writer plus something else. To look at it from the other direction, my accountant told me that unless I'm Stephen King or J.K. Rowling that for all intents and purposes the U.S. tax code recognizes writing predominantly as a hobby. As an apples-to-oranges-but-still-apt comparison, the currency of pre-Euro Slovenia celebrated painters, architects and poets (as well as the national gallery and the national library). When a nation's artists and institutions of art grace its currency, it's hard to deny that they're filling some larger cultural role. I'd like to see the amount of public money from this country that in the last 12 months has gone to directly funding the Arts compared to the amount of money directly funding military drone programs. I believe that would speak volumes. But I don't believe its my first role as a writer to ask such things.

8 - Do you find the process of working with an outside editor difficult or essential (or both)?
Both.

9 - What is the best piece of advice you've heard (not necessarily given to you directly)?
No one can love you enough to make the pain go away.

10 - How easy has it been for you to move between genres (poetry to critical prose)? What do you see as the appeal?
I'm not very good at it. I have a folder on this computer with probably a dozen or so essays (some reaching tens of thousands of words) that have raised so many more issues than they (or I) are qualified to address that I've hidden them away like the dozen eggs in the half-carton egg box. The appeal is that I'm still considering those questions, which is why those essays are egg box-hidden and not deleted.

11 - What kind of writing routine do you tend to keep, or do you even have one? How does a typical day (for you) begin?
My routine usually consists of wasting long stretches of perfectly useful time bemoaning my lack of routine.

12 - When your writing gets stalled, where do you turn or return for (for lack of a better word) inspiration?
Cigarettes—whether I'm smoking or not, stalling for me is first realized as a fluttering hand tapping breast pocket (real or imaginary).

13 - What fragrance reminds you of home?
With apologies: fresh cut grass in high humidity.

14 - David W. McFadden once said that books come from books, but are there any other forms that influence your work, whether nature, music, science or visual art?
The strongest influence to my work is whoever or whatever has the ability to at some level slow down the voice inside my head enough for me to hear when it stops and when I start. Of course, whenever I find someone or something that does that I need to be strongly reminded of answer 9 supra.

15 - What other writers or writings are important for your work, or simply your life outside of your work?
I believe all writing to be important. The importance of the whole is dramatically shifted by the removal of even the seemingly-most insignificant of its parts. Unless its describing search results for authors named Wallace, it's not fair to put David Foster Wallace and Wallace Stevens in the same sentence. Not fair to sentences.

16 - What would you like to do that you haven't yet done?
Nothing dangerously illegal and only three things risky.

17 - If you could pick any other occupation to attempt, what would it be? Or, alternately, what do you think you would have ended up doing had you not been a writer?
I still strongly believe that I will one day become a Major League Baseball player.

18 - What made you write, as opposed to doing something else?
I never really made a choice to write. Writing is how I experience my experiences. There's that Didion quote that goes something like 'I write entirely to find out what I'm thinking, what I'm seeing and what it all means in terms of what I want and what I fear.' I would follow that with: 'And then, ideally, revise so as to present that realization to the reader in a not-nearly-so-mumblypants fashion.'

19 - What was the last great book you read? What was the last great film?
Pardon my semantic handcuffs—without which I would be blissfully spared the knowledge of the graveyard as I whistle—but I don't even have a favorite color. I will say this though: the book that has most affected the last five years of my life is Cormac McCarthy's Blood Meridian. A great film: There Will Be Blood—because  1) I like dialogue I have to rewatch 2) the sharp darkness in DDL's eyes and 3) the score. Although based on a largely different piece of literature (Sinclair's Oil!), the film actually has a number of scenes which are thematically (at least according to one of the aforementioned egg-boxed-essays) quite similar to sections of Blood Meridian.

20 - What are you currently working on?
An epistolary correspondence between various anthropomorphized states and countries as they seek to use global warming-induced rising tides as a cudgel for stirring up and/or stifling the most basely pedestrian (and wholly inconsequential) of political intrigues. It's slow going and not nearly as funny or satirical as it sounds.