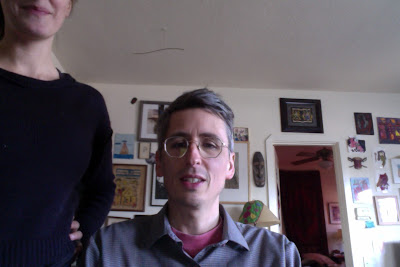 Julien Poirier (1970- ) lives in Berkeley, CA with his wife and daughters. His most recent book is Stained Glass Windows of California on Ugly Duckling Presse.

1 - How did your first book or chapbook change your life? How does your most recent work compare to your previous? How does it feel different?
I self-published my first book when I was 18. I didn’t see the difference between publishing and self-publishing, and I was very proud to have it out and felt famous in the cafes. I was almost completely ignorant of poetry lineages in the San Francisco Bay Area where I grew up, and I considered myself probably the best poet alive. My arrogance made good manners impossible and also made me numb to criticism. I aggressively promoted the book by posting flyers for it all over town: “New words from the poetic idiot.” Little has changed.

2 - How did you come to poetry first, as opposed to, say, fiction or non-fiction?
In high school I wanted to be a baseball player, but I was too small, and then an actor. I went out for all of the plays and I was pretty serious about it. Then I got caught breaking into a popular girl’s house and became a pariah at school—at least that’s how I felt. My parents grounded me for six months. I would sneak out at night and ride my bike around town. I started writing poems at a picnic table at a little playground down the street from our house. I simultaneously started smoking cigarettes and drinking lots of coffee. My mom gave me books by Yeats, Eliot, Hesse, Kerouac, Dylan Thomas and Camus. I started bringing the books to school and displaying them on my desk. I formed a theory, which I held onto for years, that Poetry had been swallowed whole and digested by popular music in the 60s (personified in my mind by Bob Dylan) and that Dylan Thomas had been the last great poet. Poetry’s blazing courtly guild was nothing but a fantastic green ruin by 1988. I identified myself as a new poet in that landscape, alone and thrilled. Maybe that’s why I was jealous of other young poets if I heard they were any good.

3 - How long does it take to start any particular writing project? Does your writing initially come quickly, or is it a slow process? Do first drafts appear looking close to their final shape, or does your work come out of copious notes?
These days it’s a slow process because I’ve been working on the same system of poems for the last year and a half. I call it a system rather than a book because all of these poems are blood relatives, which means none of them are ever really finished until the whole thing is done (or dead). When I work on a system for any length of time, I think about it a lot between sessions and it has a tendency to become more complex, I mean more tangential and rhythmically tangled. The complexity is a problem that appears on the surface of the poem and would be fatally distracting to anyone reading it unless I can get it to all come through. I mean rather than scaling back and making it simpler, it would be more exciting to see if you could get all of the surges to amplify under an ice-water clear surface. My old instinct is to complete the poem I’m writing in a single sitting, so this more varied and seasonal approach is something new to me.

4 - Where does a poem usually begin for you? Are you an author of short pieces that end up combining into a larger project, or are you working on a "book" from the very beginning?
I like working on a book. Periods in which I’m writing isolated lyrics have come to coincide with a cynical turn of mind. When I’m writing a book, or a system of poems, my instinct is to be inclusive. I scavenge like a bower bird and steal like a magpie. The creative challenge is to wire all tangents and obsessions for sound, then send them out onto the streets of your city, then transcribe the sonic map.

5 - Are public readings part of or counter to your creative process? Are you the sort of writer who enjoys doing readings?
I love doing readings and I wish I could read more and more often to more and more people who would arrive excited to see me read my new poems. I think, under circumstances even approaching those, that I’m able to enjoy myself so much I might go over the top and give a great performance. When I sense the audience isn’t with me, I can’t be myself. Recently, I got so bored and thirsty that I almost walked out on my own reading.

6 - Do you have any theoretical concerns behind your writing? What kinds of questions are you trying to answer with your work? What do you even think the current questions are?
I have an existential concern about whether or not anyone will read what I write, and if they do, whether my poem will reach them alive. Will I succeed in doing the most difficult thing, which is to write a real poem? Or will I just come close. A real poem is a place where the poet and the reader meet as equals. A near-miss poem is an interesting, potentially brilliantly devised word object. The current questions are always: Who is writing the real poem, and where can I find it?

7 – What do you see the current role of the writer being in larger culture? Does s/he even have one? What do you think the role of the writer should be?
I don’t know what you mean by “larger culture.” I don’t mean to be pedantic, I just draw mush whenever I try to think about it. I’d say “the marketplace of ideas” is a better phrase to describe what most people, good people, are talking about when they bring up culture. And I’ve noticed how much some people enjoy putting poets in a double bind by asking them why no one reads poetry any more—always the ones who haven’t read a poem in ages. But to answer your question, it seems to me that a writer writes new things, and by doing so produces new culture. So this would be his or her role in the larger or multi-culture. S/he takes words for a spin in bad conditions, digs tunnels under stages and flies blank bright flags on landfills, starts doo wop jewel thief bands, bands apart, re-opens wounds...and trusts that the audience is out there, or will be soon.

8 - Do you find the process of working with an outside editor difficult or essential (or both)?
If I had a regular editor, I think I’d find it essential. My editors on past books have all been top-notch. But I’m pretty happy editing my own books, too.

9 - What is the best piece of advice you've heard (not necessarily given to you directly)?
“You have to believe that what you’re doing is extraordinary.”

10 - How easy has it been for you to move between genres (poetry to prose)? What do you see as the appeal?
Well, I and everyone I know probably writes the equivalent of a novel a year in emails. These are feverish exploded novels written for an amazing variety of audiences, from friends to ticket takers, office colleagues and bosses, crushes and once-famous boxers. It would be interesting to mechanically compile all of the emails you’ve written in a calendar year and publish it as a novel. Or would it? You could potentially include all of the links, attachments, etc. Where would it end? I’m wondering if a poem can function as kind of a Ghostbusters storage box that sucks all of this howling matter out of the wind and stores it like compressed gas. When you look at the poem you’d know and feel that it was full of frightening goofball energy.

11 - What kind of writing routine do you tend to keep, or do you even have one? How does a typical day (for you) begin?
I have two young daughters, and a typical day begins and ends with them. I stay up late writing and I write a lot of notes between things, but there’s no routine anymore, it’s all off the cuff.

12 - When your writing gets stalled, where do you turn or return for (for lack of a better word) inspiration?
When it gets stalled, the best thing I can do is walk up to the library, stand still and let books land on me like pigeons. The best thing to do is to sit around reading architecture and geology and city planning books and books about Zen Buddhism and art. If I read poems I want to write poems, and sometimes the best thing is to take a break. But usually I won’t allow myself to do that, and I end up glaring for  hours at the page or the screen as I fillet whatever half-living fish (usually a guppy) I’ve been able to catch there. Then I either quit or I start singing and writing down whatever nonsense comes out. And sometimes the nonsense becomes a poem.

13 - What fragrance reminds you of home?
My grandfather’s old raincoat.

14 - David W. McFadden once said that books come from books, but are there any other forms that influence your work, whether nature, music, science or visual art?
Definitely. All of the arts and sciences give me the courage to keep writing. A few months ago I went for a walk around Mt. Diablo in California with my wife, who is studying herbal medicine, and things I saw and smelled on that that walk, and the things she said about the plants, led to new poems. Blasting “Safe European Home” by the Clash on the earphones at 2 a.m. never hurts.

15 - What other writers or writings are important for your work, or simply your life outside of your work?
Filip Marinovich and Ben Hout. Both of them told me the truth when my poems weren’t good enough, forcing me to do better out of respect. Filip is a real poet all the time, whose books are easy to find. Ben is a great storyteller whose “Revelations” will show up down the road. In my book El Golpe Chileño I told some of the story of my friendship with the poet Greta Goetz, who in her early twenties was writing poems as good as anything anyone ever wrote.

16 - What would you like to do that you haven't yet done?
Learn to play clarinet better than I played in 5th grade.

17 - If you could pick any other occupation to attempt, what would it be? Or, alternately, what do you think you would have ended up doing had you not been a writer?
I would be playing clarinet in the New York Philharmonic, moonlighting in a Ragtime band.

18 - What made you write, as opposed to doing something else?
Being a writer gave me a strong identity that I could control all on my own.

20 - What are you currently working on?
A book called “Way Too West.”