I’ve seen the Sarvis bloom
diaphanous white from far off

while the mountainside
is still brown
It’s almost Japanese

A kind of canny lullaby
A historic caution

He said, Look! Mama!
Here is
The Second breath of Spring 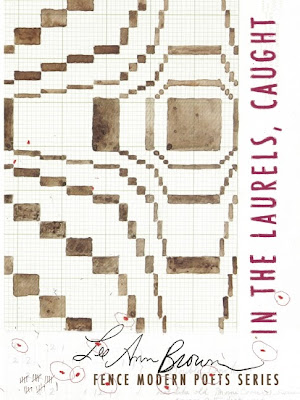 As the press release states for American poet and filmmaker Lee Ann Brown’s third solo trade poetry collection, In the Laurels, Caught (Albany NY: Fence Books, 2013), this collection “is a collection of lighthearted, deep rooted-poems written around the Appalachian region of North Carolina in Madison County.” Composed by an “adventurous, intellectually restless native” and “transplanted outsider,” Brown explores the details of a geography through its spoken language. Recognizing both the arbitrariness and specificness of place, Brown’s poetic study is reminiscent of the work of Arkansas poet C.D. Wright, or the Ontario Gothic of Phil Hall, exploring the dialect for the sake of exploring the stories, storytelling and myths of this fraction of the American south. Through Brown’s study, the words, phrases and references she weaves throughout her poems speak to the culture and the population of the area, from the sing-song lilt of casual speech and laid back conversation to the rougher ends of such a folk-collection of country music. The collection opens with both a travelling companion, Lorine Niedecker, and an open, uncertain eye, one attempting to gather as much and as quickly as possible before beginning to settle into the poems. It almost reads as though Brown was channeling Niedecker to help open the potential manuscript, channeling Niedecker’s scientific approach to writing her own “pastoral” in exploring natural and human histories through the poem, such as in her own poem “Lake Superior” [see my review of the recent edition of Niedecker’s Lake Superior title here].

The author of two previous trade works – Polyverse (Los Angeles CA: Sun and Moon, 1999) and The Sleep That Changed Everything (Wesleyan University Press, 2003), as well as numerous chapbooks – Lee Ann Browns’ In the Laurels, Caught is a polyvocal text, from the poems within the main body to the handwritten script that edges along the lower margins of each page, sometimes as appearing as a kind of Greek chorus, and other times, entirely separate from the action of the main text. Held as the final section of the collection, “River Codex,” is sketched in reverse through the whole of the collection. In the “NOTES ON THE POEMS” at the end of the collection, Brown explains: “Throughout, italicized lines are either quotes, overheard, or should be sung. RIVER CODEX is designed to be read either forwards or backwards, stanza by stanza, throughout the book.” The section helps give the collection the appearance of a living document over a fixed text, as a kind of working notebook.

IF I DON’T SHAKE YOUR HAND
OR HUG YOUR NECK

Just know I want to,
Billy in the low ground

Ain’t no sunshine when she’s gone

This is a new song
that sounds like an old song.

Usually we start slow and taper off.

So Bless your hearts and other vital organs

What do we know of Madison County? Predominantly, what Brown tells us. Any geography can’t help but be thick with its own language, dialect and references, and Brown’s project, in many ways, is no different than Lisa Robertson writing out meteorological language in The Weather (New Star Books, 2001) or Michael Holmes exploring the patter of professional wrestling in Parts Unknown (Insomniac Press, 2004). Brown’s is nearly a scrapbook of poems as signage, conversation, journal entry, letters to friends, reminiscence, historical fact, observational note and the occasional ballad, all wrapped up in an engaged, sustained and ongoing love for the people and the place. As she writes to open “A LETTER OUT”:

So it’s one of my first days writing here. I take off to the old turnpike and stop in at the Ramsey cemetery. It reminds me of the one Linda took me to with a view of the Flatirons where we searched for the unmarked grave of Edward Steele and instead found a heart-shaped rock. A blue and grey vista of ridges fold around my home. These mountains are old mountains. Rockies: 5 million years old, Appalachians: 500 million.

I want to meet you people but I am only on the first level time-wise. Even though it’s my home state, I’m way out in the country now. There’s something in this impulse that wants me to write it with light.