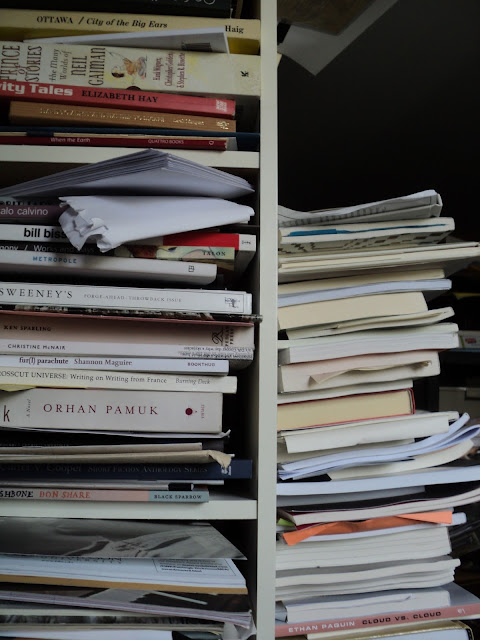 [a view of the bookshelf closest to my desk] Another summer, nearly over. I’m always reminded of one particular song by Leonard Cohen during this period: “The summer’s almost gone / The winter’s tuning up.”

If anyone is willing to help move over a couple of loads of boxes on either September 10th, 11th or 12th during the day, send me a quick email. The more the merrier, and the faster it will go.

Enormous change, and possibly even chaos. I welcome it.

Ottawa ON: I’m fascinated with the occasional items that poet and Apt. 9 Press editor/publisher Cameron Anstee [see my profile on both he and the press here] has been producing over the past couple of years through St. Andrew Books: limited-edition chapbooks of his own writing, predominantly produced to coincide with one of his readings, or some other event. After The Turning of Pages Should Not Be Audible (2011) [see my review of such here] and She May Be Weary (2011), the third of these chapbooks is One Hundred Additional Frightening Things (2013), “Published in an unnumbered edition of 30 copies for a reading at Raw Sugar Café, Ottawa ON, 10 August 2013, with Christine Miscione, Nicholas Papaxanthos, and Michael e. Casteels.” As a poet, Anstee has long favoured the sequence, and most (if not all) of his dozen or so chapbooks are chapbook-length sequences that highlight the breath, the meditative lyric stretch, and a particular cadence of attentiveness to the line. The poem here feels stretched further than what Anstee has composed previously, with distances between the stanza/sections, some of which works brilliantly, and some of which feels as though it doesn’t hold together as tightly as some of his previous works.

water in lungs, everywhere
a knife, removed
the moment before no longer falling
locked at the knees
the same pain just a moment longer each time
any new ache
bones in the fresh air
full anaesthesia
no answer from many doctors
and then -

Taking title and epigraph from Jim Smith’s One Hundred Most Frightening Things (blewointmentpress, 1985) [see Anstee’s discussion on the book and poem here], Anstee’s writing focuses on such small, personal moments, etching and imprinting each word on the page. Given the meticulous care he gives to each phrase, it is difficult to imagine any of this poem drifting away anytime soon. The poem ends:

naked, the first time
naked, this time
writing about sex
how dry my hands already are
I continue to break watches you give to me
it often feels beautiful to live here
Gee, You’re so Beautiful That It’s Starting to Rain
the best parts remain with you
days I can say nothing to
there is a touch that will be our last

Iowa City IO/Wall Walla WA: New from The Catenary Press is American poet Jennifer Moxley’s limited-edition chapbook, FOYER STATES (2013). Produced in a numbered edition of one hundred (I have number seventy-nine), FOYER STATES is a reworking of fragments of The Iliad, focusing on Helen, and her abandoned daughter Hermione, among other characters such as Eurydice and Aristaeus. Through two short sequences, Moxley’s lyric exploration balances a fine measure between formal language and a more experimental lyric, between the old and the new, a balance that not only holds the poem together as a whole, but manages to make the whole sequence thrum with a fresh and renewed energy. Moxley isn’t the first contemporary American poet to explore the story, given Lisa Jarnot’s work on the same a few years back, holding her own lyric line between the ancient and the contemporary. Is this a singular and self-contained work, one wonders, or part of something far larger?

To assuage the hatred of having a mind but understood the privilege.
She listened to fate and saw its face: A woman holding a dying soldier.
A lover, a mother, it makes no difference. The solace of woman’s flesh
Shredded by pointless death. To hide their murderous exploits experts

Punish the girl. Eurydice bitten into lament. It was her fault.
Her unedited sweetness demanded ending. Aristaeus followed suit.
Loveliness, he believed, must be consumed. The thoughts of a man
(was he really a man?) who caused the death of all his bees.

It was Hermione who told us that when in death Eurydice missed
Only the scent of earth’s flowers, had forgotten her husband’s song. (“FOYER STATES”)