12 or 20 questions: with Roland Prevost 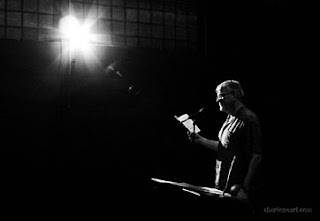 Roland Prevost [photo: Charles Earl] recieved the 2006 John Newlove Poetry Award (judge: Erin Mouré). His poetry has been published in two previous chapbooks: Metafizz, Bywords, 2007; Dragon Verses, Dusty Owl, 2209. He has also appeared in ottawater 3.0, and ottawater 5.0, above/ground press, Variations Art Zine, Bywords Quarterly Journal, Peter F. Yacht Club, Angel House Press, among others. He was the managing editor of poetics.ca for two years, and currently acts as the managing editor for 17 seconds, an online journal of poetry & poetics. Late at night, he loves to look at the deep sky through his various telescopes. A new chapbook of poems appears in August with above/ground press, to be launched on August 13 at the Ottawa Art Gallery.

1 - How did your first (book or chapbook) change your life? How does your most recent work compare to your previous? How does it feel different?

My first chapbook, Metafizz (Bywords 2007) brought home the novel idea that others might enjoy reading my poetry as much I enjoy reading the poetry of others. Who knew?!

My writing contains less of ‘the amazing story of I’ as the default topic. There’s a move towards leaving confessional self-reportage for my logbook and saving poetry for other more outward themes.

As a kid, I came to poetry by exposure to a handful of ‘poetic’ song lyrics. Soon after, I started reading tons of poetry, and then took a ‘free school’ poetry course at Pestalozzi college. For me, it’s the most concentrated, challenging and also satisfying type of writing you can engage in, both as reader and writer.

I’ll often muse that writing a poem represents my way of minting a many-lined name for a complex emotional molecule – one initially beyond the reach of words.

3 - How long does it take to start any particular writing project? Does your writing initially come quickly, or is it a slow process? Do first drafts appear looking close to their final shape, or does your work comeout of copious notes?

Some poems surface lightning-fast, almost whole. But most times, I like to play and fiddle gradually with a text until it contains everything I want, and no more. Writing roughly works in two steps: one, the capture of fresh raw materials, and two, iterations of polishing / editing.

4 - Where does a (poem or piece of fiction) usually begin for you? Are you an author of short pieces that end up combining into a larger project, or are you working on a "book" from the very beginning?

I begin with an evocative fragment – an image, a phrase, or a feeling that I’ll jam on, expand, and then mine for precious metals.

This year, I’ve been building collections from a stack of already written poems, finding the underlying relationships and wider motifs. Next year, who knows?

Public readings are fun, though not central to my writing process.

However, readings do give rise to interesting conversations, ones that I find intrinsically worthwhile. And some of those discussions will feed back into the writing, if indirectly and much later.

I do enjoy absorbing ‘poetic theory’ now and again, but then immediately try to forget what I’ve read, so as to give those concepts a chance to work freely, behind the scenes. If it sticks to me and informs my writing, then... great... so it does. The way I see it, theory has to carry its own weight, and freely. Otherwise, it runs the danger of turning too quickly into a paint-by-numbers grid.

Questions I’m trying to answer? Nope, can’t say I’m consciously trying hard to ‘explore larger aesthetic questions’. Other than keeping an eye out for any fresh / handy / creative interpretations of the meaning of life, art and... um... everything, not much theory really.

I’ve shared lunches, dinners and/or drinks, with many poets recently, discussing all kinds of approaches to poem construction. But in the end, it seems to me that we’re all just looking for inspiration wherever it presently hides or resides. It boils down to a million variations on: "What sparks now?"

I experience a rush of satisfaction on those rare occasions when I’m able to look at the world afresh, thru someone else’s eyes. Excellent writers make that possible. I believe culture propagates exactly in this manner. Stated in a semi-classical manner, people might have once described the role of a writer as: ‘to feed and free the soul’. As a less lofty attempt at a re-statement of same, I’d be tempted to say: ‘To play and stim play in the best game in town.’

I’ve been lucky to work with some local editors (rob mclennan, Amanda Earl, Steve Zytveld, etc.) who have an affinity for what I’m trying to accomplish; very helpful and supportive people.
I believe there can be such a thing as too much help – too many cooks. I find that I require a substantial amount of slow-cooking privacy, in order to write something that interests and engages me fully.

For every poem you write, you should read at least five new poems.

People who’re only interested in ‘being a poet’, but never closely read anybody else’s works, don’t tend to write outstanding poetry. All icing and no cake.

But most people figure that out, soon enough.

Practically, I find poetry’s best suited for the expression of one focused mood or moment, in a concentrated nugget. I do write songs, keep a logbook, and sometimes delve into writing plays or stories; each form trying to fit its substance. But poetry remains my most rewarding type of writing.

I get up around 7:30am, grab a breakfast and coffee, then head downstairs to my studio to write. I keep at it for a couple of hours, before going to work, or on weekends for four or five hours.
Whenever I skip my writing routine for even a couple of days, I begin to feel quite flat and two-dimensional, as if the colour’s out of the world. It’s a positive addiction, one I’ve chosen to adopt.

When nothing inspires, I find it’s best to dig up some excellent poetry. Once you read something that really moves you, then you’re already ‘lit up’. Usually, that’s enough for you to siphon off at least a response-poem.

Do comic book characters count? I used to identify with Spider-Man, as a kid. In spite of noble intentions, his life always turned out such a mess. He was one of the original beautiful losers in my make-believe world. As frail mortals, I think we’re all beautiful losers to some extent.

I lived for a couple of years at a cottage accessible only by boat. Much nature to inspire me there, daily.

Excellent song lyrics got me started with writing in the first place (Leonard Cohen, Joni Mitchell, etc. ). Recently, the lyrics of Conor Oberst or Regina Spektor will sometimes inspire a similar spark.

This year, I’m enjoying astrophotography – taking photos of colourful nebulae and galaxies that I post online (http://wordsters.net/). Writers tend to enjoy seeing those pictures, as they get a sense of vast perspective.

In the end, I really believe anything that has real juice for you ends up influencing your work. You can throw it all into the simmering soup pot, on the back-burner. It only helps.

Gosh, hundreds of books, lifelong, had their influence. From the ancient Greek and Roman classics, thru centuries of poets /writers /philosophers in all the so-called Great Books, down to the very latest fringe language experiments. As I see it, all this writing forms part of one giant ongoing meta-work. We each get to mumble a few words, maybe, before we pass it on.

Last few months, for example, I’ve been studying the 9th century poets of Moorish Spain, and the popular poetic forms of their time. Can you believe they were once publishing 63,000 books per year at their height, back then? Again, all for the soup pot!

I’ve already done quite a few things, so far.

Live forever? Haven’t done that yet.

Naw, probably not a great idea.

Endings do make or break the story, after all.

Unfortunately, as many have discovered, it’s very rough to eke a living off poetry.

I found out that I like to learn things, get a decent grasp of new concepts, and then assist others in learning them too. So, for many years now, I’ve made a bit of a living off teaching / training. I’ve been quite happy with that.

For me, writing amplifies life. It boosts the reach of emotion, clarity, complexity, mood, intensity, awareness, etc.. With poetry, this amplification effect gets even richer. That’s the real genesis of my passion for writing. It’s exactly the same motivation as my passion for living.

Last great book: The Unbearable Lightness of Being, by Milan Kundera.

Two new poetry chapbooks out this year. Dragon Verses, Dusty Owl Press, just came out in June. A second chapbook Our/Are Carried Invisibles, above/ground press, will be coming out in August. (launch planned for August 13th ,7 pm, at the OAG).

Other than that, I’m presently working on a poetry book manuscript. Also, recently, my songwriting muscles seem to be flexing again. ( see http://wordsters.net/, under music, for latest song ). The lifelong private logbook’s ongoing, of course. It’s good to always have something or other percolating.