12 or 20 questions: with Jacqueline Larson 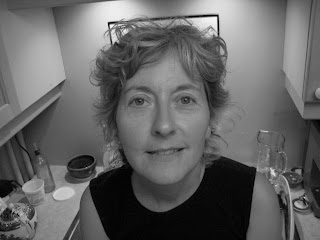 Though she lives in Toronto now, Jacqueline Larson was born in and formed by Alberta. She received her MA (English) from SFU where she also worked as managing editor of West Coast Line. Her work has been published in a number of journals and shortlisted for the National Magazine award and Hart House Review poetry prize. Her first book, Salt Physic, was published by Pedlar Press in late 2008.

Salt Physic launched in mid-November 2008 and the next morning Margaret Christakos invited me to participate in the spring round of Influency, the poetry salon she hosts/stages/three-ring circuses. People’s insights about the book—and their smart difficult questions!—taught me so much about how engaged readers can pull out the things between what is said; how their reading, listening, quickens a book. I’ll let you know later if this changes my life.

Poetry came to me first. I remember my mom reading me Edward Lear’s A Book of Nonsense and Robert Louis Stevenson’s A Child’s Garden of Verse—their sounds still ring inside my ears and sternum.

It varies. I often overwrite and then pare back, write into and then cut back again.

A lot of my poems so far start with some kind of psychological question or knot I’m picking at—typically an emotional or other charge that holds my attention, something I’m trying to understand. But then the emotional puzzle has to involve thinking too, thinking through. The individual pieces came before the book, though a new project just percolating now feels more like a book from square one.

Readings can clarify where something is off but the alchemy between reader and audience is idiosyncratic. I’m sure you too have had the experience of reading in one venue where there’s no ear—people are just not connecting with what you’re doing. You can read the exact same material a few days later somewhere else and you’re received like the next bright thing. Neither of these responses should be taken as the truth on the work. That said, I always read aloud at my desk to hear how the thing is going.

Kafka famously described the value of difficult books—the “books that bite and sting us” like this: “If the book we are reading doesn't shake us awake like a blow to the skull, why bother reading it in the first place? …What we need are books that hit us like a most painful misfortune, like the death of someone we loved more than we love ourselves, that make use feel as though we had been banished to the woods, far from any human presence, like suicide. A book must be the axe for the frozen sea within us.” I’ve had this in my mind for years but when I looked it up to answer your question, I was struck me how aggressive an image it is, how violent. Kafka is talking about reading but I think the same thing can be said for writing. My own work comes nowhere near that “bite and sting” though I’m always on the lookout for what might shake me awake. I hope that an axe isn’t the only way but I guess it depends on how solid things get in the heart.

I’m wary of shoulds. Writers can open doors for readers. See number 6—they can wake us up. Why did Kafka say that getting shaken was like a death or painful misfortune? Tenderness can also break open a heart and make us see clearly.

I make my living as an editor so I have to say it’s essential. Beth Follett of Pedlar Press edited this book. She asked difficult questions that made me go back into some texts I thought were long finished and reopen them, rethink them. Difficult and essential.

There seems to be a theme in how I’m answering here. Much of the writing I value involves a movement away from ignorance. The genres are different paths, equally valuable.

I still struggle with sustaining a discipline. But when I get to it, discipline is sustaining.

12 - When your writing gets stalled, where do you turn or return for inspiration (for lack of a better word)?

Poetry—any number of favourite books I open at random. The meditation cushion. Baking. Going for a run. Open The Essential Rumi (translated by Coleman Barks) at random for a message.

Can’t say that I’ve thought much about myself in a fairytale but I’ll say Persephone from Homer’s “Hymn to Demeter.” There’s a long poem in the book in her voice. But I hope I’m moving on to something else now. Spending time in the underworld has its down side!

So many writers are crucial—I’m reluctant to name a few because of what is left out from such a list. Have you had any feedback about how such lists come to signify how cool or uncool the person is in their answers to this question? I always go back to Erín Moure for the life-giving electric zap to the heart and mind that her poetry zings. Many Shambahla Buddhism books sustain me. Lynda Barry!

Write a second book. Sing! I’ve also often thought that tap dance could help a person get over themselves.

Like many people I started out as a reader. And I’ve done lots of things that aren’t writing but the desire to write is probably part of what kept me from being entirely neurotic or from career alcoholism. The steadiest and most engaging work has been scholarly editing.

Hunger for something else. Hélène Cixous says it well: “There has to be somewhere else, I tell myself. And everyone knows that to go somewhere else there routes, signs, ‘maps’—for an exploration, for a trip. That’s what books are. Everyone knows that a place exists which is not politically indebted to all the vileness and compromise. That is not obliged to reproduce the system. That is writing. If there is a somewhere else that can escape the infernal repletion, it lies in that direction, where it writes itself, where it dreams, where it invents new worlds” (The Newly Born Woman, p.72). She’s talking about reading and about a young person’s desire here and yes, it’s utopian but I have a tenderness for such aching.

I recently copy-edited Erín Moure’s My Beloved Wager which was a wonderful. Phil Hall’s White Porcupine. Carole Maso’s Ava, Anne Carson’s Autobiography of Red are definitely in the category of great books but there are so many others. Films: Children of Heaven (Majid Majidi); I finally saw Grey Gardens recently (the 1975 documentary version) and loved it.

Honestly? I’m sanding and refinishing the floors. And prose narrative is pressing on a nerve.