another long weekend, another glengarry 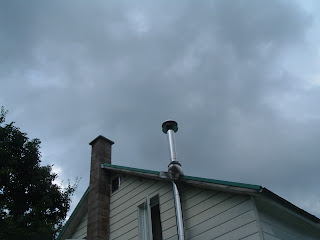 Another August long weekend, another weekend on the farm. Where does all the time go? My sister's usual Sunday long weekend bbq got rained out, so a small one on Sunday that went late, and a larger one on Monday that ended early, since everyone had to go to work the next day. And how can someone with three kids not be exhausted after two parties in two days?

This, on the left, a Sunday photo of the rain coming in. The top of her little white log house.

The first day, the first party, we spent most of it sitting in Kathy's kitchen, with the inevitable bonfire later on; the second day, we spent most of it outside, watching about eight five and six year old girls bouncing on the trampoline; I worry about that many girls getting together at once. As soon as they realize what they could have planned together, we would all have been in trouble. They were hours on that trampoline. The first day, a few pitchers of sangria I had still in my system the next afternoon. The second day, quieter. A glass or two of red wine. 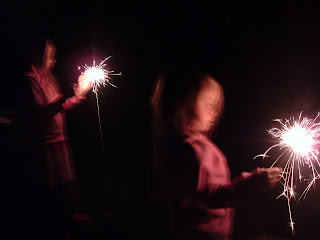 [Kathy's girls, Emma & Rory with
sparklers by the campfire] I don't even want to think about what the Highland Games must have gone through, with that torrential rain (see? even Wikipedia says its the largest outside of Scotland). Enough that it took down one of Corey's tents; enough that it forced Kate and I into Alexandria on Sunday morning for ice cream.
There was even a car accident along the road into Maxville, two cars flown off the road, for the wet roads. Isn't August supposed to be drier than July? And why is it the Dairy Queen didn't have any coffee? Kate said I shouldn't be going to an ice cream place for coffee; when we went into the Tim Horton's, after, she suggested I ask them about their ice cream. Heh. 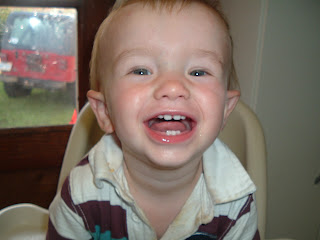 [Duncan, a year old, finding something or other terribly amusing] Half our drive through Alexandria, Kate and I noticing buildings that hadn't been there before. When did they build a new Tim Horton's in town? When did they (etc)? We obviously aren't going through there often enough. Did you know the bookstore in town (closed, for some reason) was sold a few months ago? I have no idea who the new owners are. And then watching Dr. Horrible's Sing-Along Blog (finally), which I really need to see again.

And Kate now enrolled in college; I'm the parent of a college student. When the hell did that happen?

[a link to the whole series of photos on facebook]
Posted by rob mclennan at 11:08 AM
Labels: Glengarry, Kate Seguin-McLennan