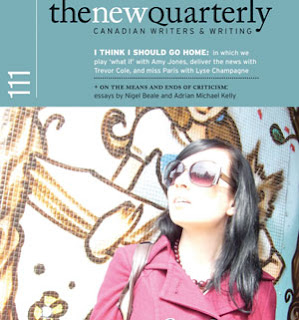 Waterloo ON: One of the features of this new issue of The New Quarterly (#111, Summer 2009) is an interview with (conducted by poet Katia Grubisic), and three stories by, Toronto writer Amy Jones, with her first collection of short fiction, What Boys Like and Other Stories, out this fall as part of the award, “Bet You Can’t Read Just One.” I have to admit, I quite like these stories by Amy Jones, recent winner of the Metcalf-Rooke Award. After reading the published short story collection by a previous winner, a collection I never quite understood the appeal of, I’ve been leery of the award proclamation; should I try for another winner? And it’s true, I couldn’t read just one.

Amy: I like to mess with my characters a little bit, see how they will react when the things they expect to change their life don’t end up changing their lives at all. Most of my characters try to make all these huge external changes as a way to find happiness—running away, moving home, chasing a new relationship—when the changes they really need to be making are internal ones. Despite the lack of happy endings, though, I like to think my characters will be okay…

Katia: What was the genesis of What Boys Like, oh puppetmaster?

Amy: I guess you could say these stories all came from the same sort of place: I look at the world and I think what if? What if that bored housewife I see at the grocery store was kidnapped at nail gun-point by a sexy stranger? What if that pregnant woman in front of me in traffic lost her husband before the baby was born? What if that sales clerk who helped me pick out bras at the lingerie store was actually a virgin? And the best part is, I can answer the question any way I want.

And it’s good to see something by Ottawa poet Robyn Jeffrey, two poems; she used to quietly populate readings around town, and even participated in an open set or two. Where exactly has she been hiding herself?

They strike before dawn: notching
her thighs, shoulders, chest
seed-like bodies plump with rust, burning
violaceous, punch-drunk on blood.
But they can’t get enough of her, girl
photographer, bunkered in a shot hotel
only shards from the front. The scorched
ruins and chiseled guns. The severed hand
caked in muck. And though her camera
can’t protect her from the itch
of nettled skin, she won’t flinch—
she knows how to hold a pose, observe
until morning.

An issue far more interesting prose than poetry, it also includes a lovely “In Memoriam” section for the late Quill and Quire editor Derek Weiler. And what happened to their regular “falling in love with poetry” feature? Still, I like that they keep up with other features, including the “magazine as muse,” this new one by Trevor Cole. And there is the most lovely postscript by Cory St. Elmore Lavender for his great-grandmother.

San Francisco CA: I recently received copies of Kevin Killian and Dodie Bellamy’s (almost) monthly Mirage #4/Period(ical), with issues #155 (March 2009), #156 (May 2009) and #157 (June 2009). How does one (or two) continue to produce such a journal after ten long years? These are lovely little missives, giving a touch of what’s happening in the world every month or so, in digestible passages, and running the range of comfortable to uncomfortable writing, including Jesse Hudson’s prose piece, “Hole.”

Watch this.
I made sure there wasn’t anyone watching and then I…
It was a picture, a still life, that inspired this and caused me to disintegrate. It’s pretentious really, a little too bloated and decomposed to really signify anything now.
It’s rotting as you read this, swirling in a circle of ash grey words. I will cut a hole here, a small painless gash, so you can peek behind the curtain and examine it with that intuition of yours.
You see it, right? I don’t want you telling anybody about this, spouting all my secrets from that big, cocksucking mouth of yours. I’ve kept this hidden for a long time and I don’t think I’m ready to let people know. (Jesse Hudson)

Who was it that said that a journal should give the news? This very much feels like a variant on the journal as community newsletter, much in what was being accomplished in Vancouver journals TISH, and later, TADS and the online journal The News, and what we’ve been working to attempt with The Peter F. Yacht Club. This is one that feels as though it is certainly giving a sense of what is happening from that central point of San Francisco outward, each issue featuring another set of authors from surrounding rings. Roughly twenty pages per issue, stapled in the corner, each issues features three (or more) authors of poetry and/or fiction, with these three featuring works by Matthew Gordon, Maria von Hausswolff, Tom Kendall, Raimundas Malasauskas, Adam Fieled, Colin Herd, Chris Tysh, Cody Carvel, Jesse Hudson and Jennifer Manzano, with cover art by various artists.

By papers, sharp
Sawteeth desirous
Tree strength yearning to hang you
Coaxial about the doorframe

‘I was just burned’
Don’t blame the nerves (Cody Carvel)

At $3 a pop, email Killian at kevin@kevinkillian.com to find out how to purchase copies.

JUST WHAT I NEEDED

Girl behind counter
rings up a pizza, she
is silver-plated under
me later, ribbons muss
her hair into strands,
she talks through hit,
there is no sleep in
her, there is only
someone to feed. (Adam Fieled) 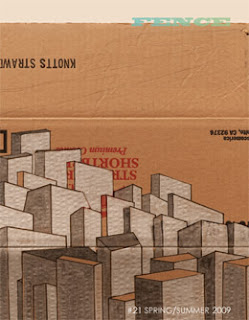 Albany NY: I’ve always been a fan of Fence magazine, edited by Rebecca Wolff, featuring an array of new poetry and fiction as well as a small handful of non-fiction pieces. In this issue, a feature from the AWP Conference in Chicago in February 2009, “Truth or Consequence in Nonrealist Fiction: Which Are We Reading For?” with contributions by Kate Bernheimer, Brian Evenson, Laird Hunt, Joyelle McSweeney and Eric Lorberer. I’m always a fan of such conference proceedings appearing in print after the fact (the annual League of Canadian Poets “Anne Szumigalski lecture,” for example, subsequently published in Prairie Fire, as well as various collections over the years from full conferences), and certainly appreciate the conversation, but what’s wrong with the culture being so afraid of such writing? The silence against such writing fuels as much frustration as it does conversation, and seeing the push against such works (and the inherent silences again) happen on both sides of the border is frustrating. But at least there are some places to head, such as these, as Evenson concludes his portion:

And this finally is the thing to remember about genre, whatever the genre is, whether it claims to designate the realistic or the fantastic: As an organizational mechanism, genre distinctions are a system of control and regulation, and as such they direct our thinking in advance, they shape our aesthetics without our fully knowing. As long as we remain unaware of this, we literally won’t see much of the work that might best transform us, even might best destroy us, work that exists within all categories and that awaits us if we can only step beyond genre’s tyranny.

And good to see new writing by American poet Kate Greenstreet, author of not only an above/ground press chapbook, but the magnificent first collection, case sensitive, and a second, finally, appearing this fall, The Last 4 Things.

“A BODY BEING OUTLINED”

Pink among the statues. Dark around the edges
like a tunnel. Look at all this junk.

“These paintings
were made with blood.”He claimed he wrote it one night.

Deplore.
Apace.
When you’re with the puppet.

I chose the better looking habit.

Very clean and white. Very white.
Before the first word
is spoken.

Thanks for the links! Amy Jones is definitely one to watch -- she also has a terrific piece in the latest Maisonneuve.
http://maisonneuve.org/pressroom/article/2009/jun/22/places-drink-outside-halifax/

About the "Falling in Love with Poetry" series, I do have one bit of insider intelligence for you -- Kim has been wondering if it has perhaps run its course -- I believe it's been going for two or three years now, though I'm not in my office and can't be certain. But I think knowing that readers like you are missing it will mean a lot.