I recently received an envelope with two poetry collections by British publisher Reality Street Editions, including British poet Denise Riley’s Selected Poems (2000) and Peter Jaeger’s rapid eye movement (2009). One of the main publishers of challenging and avant-garde writing in the UK for some time (along with Shearsman Books and Salt Publishing, among others), Reality Street Editions titles have included some of the best writing there is, by British, Irish, American and Canadian (and other) authors such as Allen Fisher, Anselm Hollo, Fanny Howe, Peter Riley, Maurice Scully, Lawrence Upton, as well as UK editions of some of Canadian poet Lisa Robertson’s poetry collections.

IT REALLY IS THE HEART

The heart does hurt
and that’s no metaphor.
It really is
that ‘throbbing muscle’ you can’t say
since that’s ‘steel comic-sex meat’

but it does hurt
top mid-left
under my shirt
with its atrocious beat.

A poet I’ve heard about for years but not had a chance to read previously is British poet Denise Riley, author of a number of poetry titles, culminating into this Selected Poems (although I presume she’s published a number of other books since), taking pieces from books such as Marxism for Infants (Street Editions, 1977), No Fee (with Wendy Mulford: Street Editions, 1978), Dry Air (Virago, 1985), Mop Mop Georgette (Reality Street, 1993) and Penguin Modern Poets vol 10 (with Douglas Oliver and Iain Sinclair: Penguin, 1996), as well as a small handful of “uncollected” pieces. But, as with any selected or collected poems, one of the most important parts, I’ve always considered, is a worthy introduction, talking about where the work comes out of and where it’s going, putting a context to the words, yet this has none, making me wonder if this is a deliberate act, letting the poems speak for themselves.

then it can call out high
and rounded as a night-
bird’s cry falling clean
down out of a black tree.

I take on its rage at the cost
of sleep. If I love it I sink
attracting its hatred. If I
don’t love it I steal its music.

Take up a pleat in this awful
process and then fold me flat
inside it so that I don’t see
where I’m already knotted in.

It is my burden and subject
to listen for sweetness in hope
to hold it in weeping ears though
each hurt each never so much.

What intrigues about Riley’s poems, apart from the range of movement evidenced through this collection, is her adherence to the musicality of the line, moving through jags, jumps and almost pop sensations, aware of how the language crackles through song not just as lyric but through a lovely rhythmic beat. Where does meaning itself come in through the music? 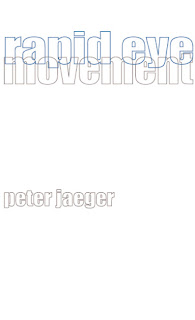 Canadian expat Peter Jaeger’s newest collection, rapid eye movement, is his fourth poetry collection and fifth title overall, after the poetry collections Power Lawn (Coach House, 1999), Eckhart Cars (Salt, 2004) [see my review of such here] and Prop (2007), and his critical title on the Toronto Research Group, ABC of Reading TRG (Talonbooks, 1999). As the back cover explains, this new book “follows a strict constraint: two bands of text run continuously throughout the book. The top band consists entirely of fragmented dream narratives recorded by historical and contemporary dreamers, while the lower band juxtaposes found material which includes the word ‘dream.’ No two sentences taken from the same source follow each other.” Does this make the collection an essay of sorts on the conversation about dreaming, a kind of record of what our civilization does and has thought about the idea of dreaming and the dream-state, or does it become so as a kind of accident? How authoritative was Jaeger’s own hand in the process? It makes me wonder if this is an essay by Jaeger or a collective unconscious idea of the dream, with lines added in a truly random order, without the author’s conscious or unconscious mind to guide such, or if the book exists somewhere in the middle? Or even, somehow, if the construction itself doesn’t matter as much as the text. Where is it Jaeger’s dream is taking us?

twilight. I lived in a big loft and sold simple haiku for thousands of pounds. My father tied me up. A triangular robot and a guy in a cowl walked up a cliff until they reached a Russian constructivist sculpture hovering in the air. I was in a shop completely filled with Turkish delight. My mother had a dragon’s tail. Someone stood alone in the gloomy cellar with his face

and I recognized, in my dream…this huge white wolf, beautiful white head, recognized this as a goddess that I’d known in Europa a long long time ago. Without strain, focus the mind on the dream state. My dreams always returned to a lonely village at the foot of a mountain; wind sighing over the knot-grass, skylark singing and singing, to a forest path in quiet noon. Sliding (trees