12 or 20 questions: with Saleema Nawaz 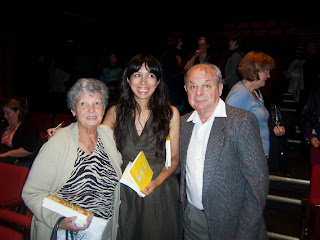 Saleema Nawaz’s short fiction has appeared in such literary journals as Prairie Fire, PRISM international, Grain, and The New Quarterly. Her first collection of stories, Mother Superior, was published in Fall 2008 by Freehand Books and was a finalist for the Quebec Writers’ Federation’s McAuslan First Book Prize. She was the winner of the 2008 Writers’ Trust of Canada/McClelland & Stewart Journey Prize for her story “My Three Girls.”

The best thing that happened with the publication of my short-story collection was the sudden freedom I felt to describe myself to other people as a writer. The project I’m working on now is a novel, so it feels very different in scope from other things I’ve written, even though I’m working with some of the same characters I’ve written about before. It’s a little more unwieldy.

Fiction has always made up the bulk of what I read, though I’ve been trying to broaden my horizons. But at this point, fiction is what I know.

I’m a slow writer, usually, but it means first drafts aren’t too far off from the final version.
Sometimes a few paragraphs or pages will come quickly and it feels like magic.

Everything I’ve written so far has begun in a different way: a line of dialogue, an image, a strange fact I want to mention — and then I follow the story until it feels over. In the case of Mother Superior, I didn’t initially write the stories with the idea of putting them together, so in that sense they combined into a larger project, but it isn’t a linked collection. With the novel I’m working on, I knew at the outset I wanted to write something longer.

I enjoy the aftermath of readings: meeting readers and other writers, talking to people one-on-one. I’m on the shy side, so I tend to find readings themselves fairly stressful.

While I’m writing, the theoretical concerns are mostly working in the background. I find I get bogged down if I have too specific of an agenda and I end up straying from the characters. Likely the questions I might cite aren’t the ones that are necessarily coming across anyway!

I think writers inhabit all sorts of different roles. There are so many different kinds of writing and writers. In literature, we expect writers to tell the truth, and the best writing will show us ourselves and the world in a new way...or in a way we knew but didn’t understand until we read it.

A good editor is essential, and the process of working with such a one is an invaluable learning experience.

I like to try and work in the morning. Not in the early morning, but just to get up and start writing without wandering into the internet too much and even without having coffee at first. There’s something about that state of writing where it even becomes half dozing where I think my inner editor is still asleep and I can get productive while she’s looking the other way.

My Bleak House first edition. And my laptop, since I’d probably be working on it at the time.

For me, books really do come from books. But movies and art and music can help generate ideas or moods or settings for a story.

I have a lot of favourite books and writers, most of them Canadian, but these days I’m trying to force myself out of my comfort zone a little and read new things. I’ve read four new (that is, new-to-me) writers over the past two months or so, and I enjoyed all of the books tremendously. I’d like to say I have a life outside of my work (in which life I imagine myself reading Dickens endlessly, and girls’ mystery stories), but at this point that would be a lie.

Finish a novel. Visit the Louvre. Learn how to throw a boomerang and do cartwheels. Oh, millions of things.

High school Latin teacher seems likely, or librarian, though I’ve also always had kind of a hankering to go to law school. Not in order to become a lawyer, but just to memorize tons of facts and contemplate justice and take really hard exams. I like taking exams. But if I could pick anything at all to do, regardless of talent or temperament, I’d like to be a musician.

I’ve wanted to be a writer since I was in the first grade, and I’ve never seriously entertained any other career ambition. So for me it’s a vocation. I really didn’t feel like I had a choice in the matter.

I’m working on a novel based on one of the short stories in my collection, in which I pick up with the same characters twenty years later.