it was a wave all along

a passing moment reveals itself to have cued the long apology

i sat with a friend the loss of her child

sliding between the heat of now and surrender

and then somebody holds your wild you

closer to the range

the specs of a body don’t reveal what it means, so which
body do you want to wear today?

the extent that we need another dollar 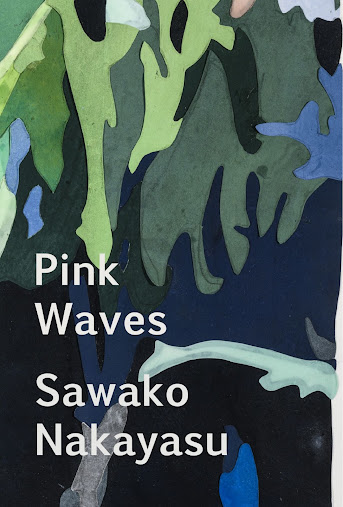 I’ve been an admirer of the work of poet and translator Sawako Nakayasu for some time, ever since discovering her remarkable Texture Notes (Letter Machine Editions, 2010) [see my review of such here]. Since then, I’ve followed her work through her subsequent Some Girls Walk Into The Country They Are From (Seattle WA/New York NY: Wave Books, 2020) [see my review of such here], Yi Sang: Selected Works, edited by Don Mee Choi (Wave Books, 2020) [see my review of such here], The Collected Poems of Chika Sagawa (Canarium Books, 2015) [see my review of such here] and The Ants (Los Angeles CA: Les Figues Press, 2014) [see my review of such here]. Set in three lettered section-sequences—“A,” “B” and “A’”—lyrics of her latest, Pink Waves (Oakland CA: Omnidawn, 2022), exist in a kind of rush, one that nearly overwhelms through a wash or wave of sequenced text; a sequence of lyric examinations that come up to the end of each poem and retreat, working back up to the beginning of a further and lengthier crest. The first sequence, for example, offers an accumulation of eight poems, each opening returning to the beginning, with the line “it was a wave all along.” Each piece in sequence builds upon that singular line as a kind of mantra, rhythmically following repeating variations of what had come prior and adding, akin to a childhood memory game. As the fourth poem of the opening sequence begins: “it was a wave all along // a passing moment reveals itself to have cued the long apology // i sat with a friend and the loss of her child // sliding between the heat of now and surrender [.]” The repetitions, something rife throughout her work to date, provides not only a series of rippling echoes throughout, but allows for the ability to incorporate variety without reducing, and perhaps even expanding, the echo. The fifth poem, in turn, opens:

it was a wave all along

a passing moment reveals itself to have cued the long apology

the extent that we need another dollar

sliding between the heat of now and surrender

and then somebody holds your wild you

which parts available for naming

atop a sharp manicured nail

Perhaps everything about her work can be described as through water: from waves, eddys and ripples. Throughout Pink Waves, Nakayasu’s poems explore boundaries both physical and temporal, as well as the edges of grief, as the press release offers: “Moving through the shifting surfaces of inarticulable loss, and along the edges of darkness and sadness, Pink Waves was completed in the presence of audience members over the course of a three-day durational performance. Sawako Nakayasu accrues lines written in conversation with Waveforms by Amber DiPietro and Denise Leto, and micro-translations of syntax in the Black Dada Reader by Adam Pendleton, itself drawn from Ron Silliman’s Ketjak.” Given its response structure, there is something fascinating to Nakayasu exploring a work as an ongoing part of a previous conversation, responding not only to particular works, but a work that is itself a response to another. Through this, she allows this work a direct lineage of response, as she offers in her “NOTES & ACKNOWLEDGMENTS” at the end of the collection:

Pink Waves is a structured improvisation: the form, the sentence, the microtranslation, the language from the sources, are the structure with which I improvised in writing, on stage, with others. It is my attempt to be true to the thickness as I move through time and space, in cross-sections of wave upon wave. Some forms of otherness are more specific to my own history, some arrive through the discourse of others. All these spreading differences.

There is something curious in the way her poems, at times, actually stretch across the boundary between the left and right page, bridging the centre and to the other side in a way I’ve scarcely seen beyond the works of a variety of poets experimenting with visual and concrete—bpNichol, for example, who worked very deliberately with the boundaries of the printed page through his work with Coach House. As well, each of Nakayasu’s sequences are structured via eight numbered parts. Toronto poet Stephen Cain has long been known for working sequences as decalogues, but it was Nichol, again, who worked in sequences with eight as his base number over the established ten. And wasn’t it Sting who sang that love is the seventh wave, pushing that every seventh wave from the ocean is stronger than the rest? For Nakayasu, it would seem, her waves are accumulative, offering a build-up that brings an eighth to include all that had come prior; the wave with the most and final power. As the fourth poem in the third sequence offers:

it was a wave, one snapped, who blistered

passing moment reveals itself to have extinguished the
occasional light

that turned stranger into child

the specs of a body

and the extent to which it delivers

Posted by rob mclennan at 8:31 AM
Labels: Omnidawn, Sawako Nakayasu