UNDER EVERY MYSTERY, ANOTHER

Thrown from my sled I skid through snow
on my knees. I look back at my tracks before
knowing I’ve come to rest on deer carcass.
Hating waste, I think perhaps I could eat it.
How did it die? There is a dead wolf, mouth
open, too, beneath the thin drift, but it missed.
A handle emerges from the deer’s shoulder:
I pull. The shovel opens the body into a round
tidy room, wood stove still smoking, TV on,
occupant gone. 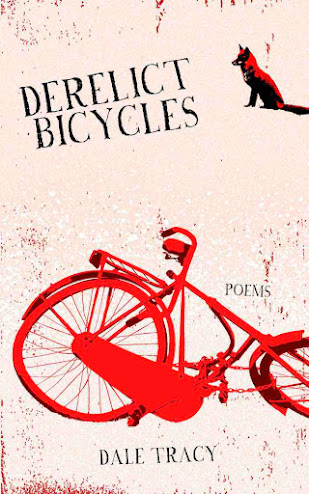 Following several chapbooks and a critical monograph comes the full-length debut from British Columbia-based poet and critic Dale Tracy, her Derelict Bicycles (Vancouver BC: Anvil Press, 2022), published recently as part of editor Stuart Ross’ series, A Feed Dog Book. Through nearly one hundred pages of short, first-person lyrics, Tracy’s narratives fold in and over themselves, offering a rhythm of furtive quickness, even as she slowly pulls and peels back layers of inquiry. “Breach the fussy haze / and tamp the cloud-winked light.” she writes, as part of the poem “THE ORDER OF MUSTARDS AND ALLIES IS MINE,” “End to end, I’m aging, wrapped in clear / violet film, ushering stunt authority, / the nutshell’s ache.” There’s a kind of carved, honed bounce to her language, rhythm and pacing, a deft way of moving across the line and the page through an array of fables and folk tales, observational sheens and surreal hints. “I ate my own shadow.” she offers, to open the poem “STOMACH END OF THE TONGUE,” “I feel it pulling on the stomach end of my tongue.”

Across a lyric populated with foxes, shadows and flyers posted to telephone poles, Tracy examines physical and psychological descriptions of the body’s usage, employing threads of surrealism almost as a way to clarify, sliding meaning up against uncertainty as a way to reveal conclusions that one might otherwise be unable to reach. “The crooked little valve at the front of my heart / greets you,” she writes, to open the poem “A MILLIMETRIC WELCOME,” “so a little blood leaks through / and back again. The heart’s courtyard grimes / in the wind, the pressure in the vessels. / Anyway, the opposite isn’t pure but emptier.” As part of her 2019 interview for Touch the Donkey, she explains that: “Because writing poetry is for me a kind of theoretical or philosophical endeavour, each poem is prompted by curiosity. A poem helps me figure something out (or at least think about it), so it responds to wonder (as in wondering and as in marvelling) and tries to capture that wonder.” Further on in the same interview, she offers:

Poetry is a way for me to sort out how to live or what I am living; at the same time, a poem often theorizes itself, sorting out in an observable way what a poem can do or is doing. In these ways, I think of poetry as being theory.