The iteration of evening once again anticipates intoxication. Quintessence essentially. The ineffable stuff of enough or too much. A semblance of some doing and another done gone. This is not a new sentence. The difference is in the repetition. Contrapuntal fundamental isolation divided against its/elf. The inevitable result of a revolving-door poetics. An indefinite allotment of illumination distributed each to each and alterwise. Quite brightly and above all hyperspherical. 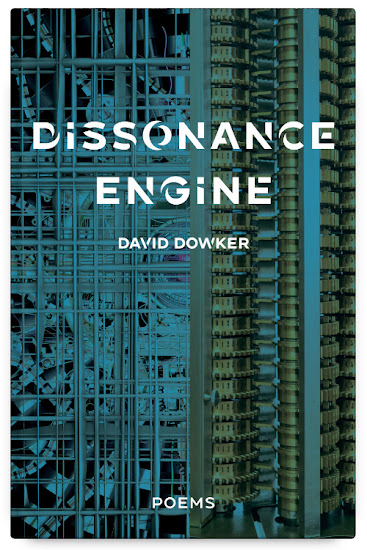 Toronto poet and editor (and publisher of the late great Alterran Poetry Assemblage) David Dowker’s latest title is the poetry collection Dissonance Engine (Toronto ON: Book*hug, 2022), following Machine Language (BookThug, 2010), Virtualis: Topologies of the Unreal (with Christine Stewart; Toronto ON: BookThug, 2013) [see my review of such here] and Mantis (Chax, 2018). Set in four numbered sections—“Time-Sensitive Material,” “Chronotope, or Sorrow’s Echo,” “Glossation” and “Orders of Multitudes”—the collection opens with a section of prose poems; sentences set as bricks that work to layer, stagger into unusual narratives. Through fifteen short pieces, Dowker opens his collection through a structural conversation or argument on form via prose blocks, altered realities, love and grief. “Now there can be no realization.” he writes, to open the poem “Reversible Dispersal, or Slipped Infinitive,” “I gather shards of tense / from the abundant blue confusion.”

Moving through poetic form, one that is held firm through the sentence and sentence-fragment—from the prose poem to more traditional line breaks and staggering—Dowker’s is a poetics of abstract specifics, circling around and through a subject via language, offering a layering of fragments that move across, rather than in and out, of narrative thought and focus. “automatic word organism,” the seven page poem “Bit Iteration,” the first poem in the book’s third section, begins. “written continuous as / another channelled pattern / calibrated to cyclic entities / in auroral whorls / of attuned psyche [.]” Dowker circles specifics on language theory and grief and the mechanics of all of the above, even as his layerings combine to move in a straight trajectory. For example, there is the poem “Logical Depth,” a poem with a tone reminiscent of some of Stephen Brockwell’s work [see my review of his latest here]; as Dowker’s piece ends: “I beside / myself again and again with diminishing resolution. She who / must be accommodated arrives late to the occasion. Her / reciprocity is legendary. As for a continuous present, the key / would seem to be the logical depth of its virtuality.” Dowker’s language twists and parrys, settles and unsettles, bouncing across lines, and even plays off the language of Walt Kelly’s infamous daily Pogo (1948-1975), a newspaper comic strip that also gifted George Bowering the title of his Autobiology (Vancouver BC: Georgia Straight Writing Supplement, 1972). As Dowker opens his poem “Disjunction, or Pogo-logos”: “The argument is being. Things being as they are.”

Posted by rob mclennan at 8:31 AM
Labels: BookThug, David Dowker