I was becoming impatient.
My report was due and we were still on the first floor.

The next wallah played a repeating game:
“I’ve Got Bits of Fig in My Teeth.”

Say, wasn’t that an early piece
by Yoko Ono?

“Amplitude into blue sky” was the dessert.
People were throwing pennies into the potted palms.

It’s a wishing witch, you said, hoping to delight me.
The light was implacable. 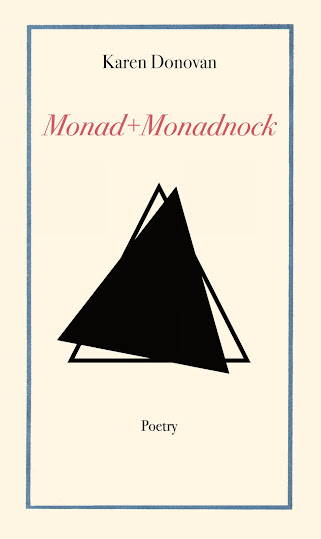 Berkeley poet Elizabeth Robinson recently recommended Rhode Island poet and editor Karen Donovan’s latest poetry title, Monad + Monadnock (Berkeley CA: Wet Cement Press, 2022), as I’d heard of neither author nor press before. The author of a handful of titles of poetry and short prose, Donovan’s gracefully-small collection of eighty pages is made up of sharp lyrics and deep cuts, direct lines and a stunning wit, moreso for its quickness and its subtlety. Hers is a lyric of leaps and odd precisions, takes that can turn on a dime, and questions so large that the lyric itself might burst but for the scope of her craft. “I wondered,” she writes, to open the poem “ALEPH NAUGHT,” “are we addressing a collection of / the so-called infinite? A bag with the world in it // plus anything is still the same bag. Half a bag / with the world in it is equal to the whole bag.” There’s something quite delightful the way her lines blur into each other, somehow simultaneously tethered and untethered from each other, offering a narrative of what could be seen as both imaginary breaks and a deceptive linkeage. Do these poems hold hints of surrealism or the foundations of reality, seemingly impossible but completely real? She writes of questions and clarifications, the biggest questions and impossible answers, offering specifics where once had been fog. Through Donovan, even the abstract has form, and what forms they are. As she writes to end the poem “NOW THAT THE WORLD IS / NO LONGER STRANGE”: “The flowers are real, the vipers are real. / Creation is singing.”
Posted by rob mclennan at 8:31 AM
Labels: Elizabeth Robinson, Karen Donovan, Wet Cement Press