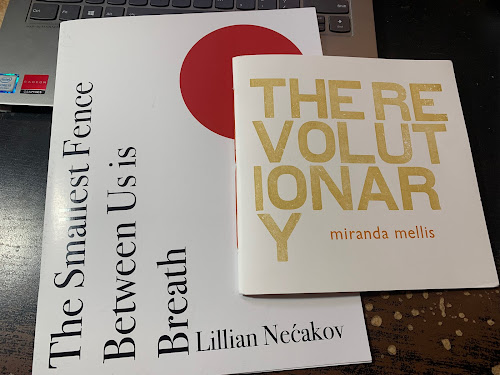 The first notes of the new year! There are so many notes. And did you see my report of our recent holiday gathering via The Peter F Yacht Club? Or the next event on our calendar, a Covid-era memorial of the poets we've lost?

Hamilton/Toronto ON: Thanks to a package a while back from Gary Barwin, I’ve been going through Toronto poet Lillian Nećakov’s chapbook The Smallest Fence Between Us is Breath (serif of nottingham, 2022) [see my review of her most recent full-length collection here], a short assemblage of sixteen first-person prose poem observations and meditations on dailyness, with a shimmer of surrealism. “Remember when I wrote 1,000 times about those birds.” she writes, to begin the opening poem, “Myrna Loy,” “I thought I was building / you a lighthouse but you were mesmerized by the slow drag of darkening shoals / and inlets. And after an entire year of chirping I let go the voodoo, the inkwell, / your sulphur hair. I let the quicksand pull you into her muscly embrace as if it was / nothing more than a dream.” Nećakov’s sentence-stanzas appear to be constructed as singular breath-thoughts, each of which accumulate into something far larger, such as the seven standalone sentence-stanzas of “Magic Plants,” the first three of which read:

There is a ring of laughter around our street, day moves clockwise into evening, the empire settles like a déntente over drowsy dogs and magic plants.

Soon my daughter’s watermarked voice adorns the room with divine secrets and the golden filaments of threadbare languages.

Table abloom with cards of diligence and fortune, she leans down, presses her hand against the dog’s soft underbelly, there is a tiny village, here, filled with Slavic jazz operas and your mother, counting on you to remember.

In other poems, stanzas might include more than one sentence, yet she still employs the stanza itself as her breath-thought, something complete unto itself, a brick to set atop another to construct the larger narrative of each prose poem. Each break between stanzas, perhaps, a chance to catch breath. I’m really enjoying the shifts in her writing through these prose pieces, and am curious to see if and how a potential full-length collection of such pieces might emerge. And doesn’t she have a full-length collaboration with Gary Barwin out later this spring with Guernica Editions?

Charlottesville VA: The latest from Brian Teare’s Albion Books is The Revolutionary (2022) by American poet,writer and philosopher Miranda Mellis, produced as the third title in Albion Books’ series eight. The author of numerous titles [see her ’12 or 20 questions’ interview here], the only title of hers I’d seen prior is the extended sequence of numbered bursts of lyric philosophy, DEMYSTIFICATIONS (New York NY: Solid Objects, 2021) [see my review of such here]. The Revolutionary is built as an extended lyric memoir on and around grief that explores the effects and implications of being raised by revolutionaries, politics and childhood grief, and the Covid-era death of a father lost years before. There is such tenderness and care through Mellis’ lyric mode, one that sweeps with more openness than perhaps straighter prose might have allowed. “A school for the living by the dying: this is what it is; this is how it happens;” she writes, mid-way through the collection, “from the terminal diagnosis to the cessation of food and drink. From the wet rattling breath, to the liminality of the incommunicado, warm heart still beating, short fast breaths pulling the body up and down on the death bed.”

They were revolutionaries. How do revolutionaries raise children? We were raised not to expect or need too much, not to think of ourselves as special, to do our share of the work, to oppose exploitation and state violence. We were raised to understand police terror, to be angry, to be frustrated, to be shocked, to be outraged, to be militant, relentless, engaged, committed, to be freedom fighters.

What makes a person a revolutionary? What makes them, like Sophocles’ Antigone, volunteer for grief? What gives them the power to act, in the name of revolution, for revolution? What is it that calls a person to try to end not just their personal suffering, but all suffering?

We were not raised to be patient with sadness, sorrow, grief. Sadness, sorrow, and grief were to be gotten rid of in order to return to the fight. “Don’t mourn, organize.”