In France California Texas or Pennsylvania

alongside the simple exacting charm of a chest of draws, I be

triviality of travel of honey in tea

before disintegrating if you only

I walk to the top of the hill while you sleep

but makes a lozenge of what’s in the air

quiet fervency of a mouth honey in tea

slid the northern lights and the sun echo

in the bodega near the end

do you see the horizon

bottom of an atmosphere

along the edges of a winter 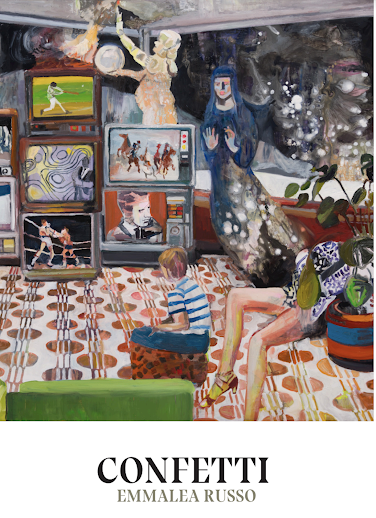 The latest from New Jersey-based poet and editor Emmalea Russo, following G (Brooklyn NY: Futurepoem, 2018) [see my review of such here] and Wave Archive (Toronto ON: Book*hug, 2019) [see my review of such here] is Confetti (Hyperidean Press, 2022), a collection that deliberately bleeds together the language of film, visual art and daily life across a collage-accumulation of lyric, prose and fragment. “Consoled a glow.” she writes, as part of the poem “PILE,” “If you think the sun. The sun. If you think / sun. The heavy corner of levitation’s mineral unfastened. / Orange and pink. Blown out, cleated, whipped clean. A / mountain light’s vein of translucent fat like love come apart / then gathered into a pile.” Set in seven sections, there is something of the accumulated structure of her lines—descriptive theory as discrete points into a linked and staggered imagistic narrative—reminiscent of a particular strain of British experimental writing, a narrative disjuncture more overt here than in some of her prior work. “there in, here in,” she writes, as part of the four-page poem “MOVING IMAGE,” “U’s theorem of what’s tremendous // beheld what held us // a hexagram-shaped light between // electric pupil, repainted clip [.]” She offers little pinpoints, pinpricks of narrative; dots or even crumbs that form along a winding path, leading up or even away using threads of perception, film scores, photography and projection through layered and overlapping images. What forms across such a wide canvas, as much as a presence is a kind of visual absence, a chaos, a framing that appears moment by moment or even scattered, but is narrative across the length and breadth of this book-length structure. In certain ways, the stretches and staggers of lyric provide the impression of an experimental film, existing narratively between, perhaps, the structures of filmmakers such as Terrence Malick and Michael Snow. As she writes, mid-way through the collection:

On the train to Marseille I recall my winter spent stretching and priming canvasses with gesso in the freezing studio as you worked twice as fast and better. All surfaces glimmered until none until I was one. I sit beside a skinny man and move through a report on the progression of Guernica photographs taken by Dora Maar. Three point five sets of eyes on dirt, scratched mirror negatives and silver grain reversed and eventually, she says, it’s like you can only breathe the air of Picasso’s studio. Have you been there.

Staple the canvas to eyeshadow mountain as me and air inspissate chemical smell and pearl eye I roll across floor.

If one follows Russo’s work at all, it would be hard not to admire the mutability of her writing projects, and the ways through which each book appears simultaneously self-contained and linked to the larger aesthetic of attempting to navigate language and the connections to genres and ideas beyond the straight lyric that her use of language make possible. As Russo writes to open her “NOTES” at the back of the collection: “The title of the book is inspired by a statement the artist Joëlle Tuerlinckx made about her work in Cahiers 2 in reference to a 1994 exhibition in Rotterdam. Confetti, she said, activated the space between spaces and allowed her ‘to do cinema, but in space.’” To work through the entirely of this work, one sees the book open with a sunrise and end with a sunset, with everything else set in-between. A structure couldn’t be much clearer than that. Or, as she writes to open the poem “FIGURE”:

is that which is contained by some boundary or boundaries.
When the figure escapes what then.

Let it have been postulated. My spastic geometry pitched
from what escaped the shape at the edge of which, rhythm.

The U at the FIGURE’s center undid.

An event smoothed under particle translucence.

What rose above the U bloated.

Confetti is magical and this review catches a glimmer