shed the peacock feather headdress and pressed
your blazing cheek against a hallway mirror. Flames
have a habit of spreading; your old life

consumed. Watching your wedding from a vantage
point, your body intertwined with his, ready to make

a promise. Your spirit hovered
silver
your voice faded

to night. He whispered the namesake
that would entwine you with mausoleum—

Mumtaz Mahal, exalted one of the palace

—a promise
to one day take for himself
and you
a throne. 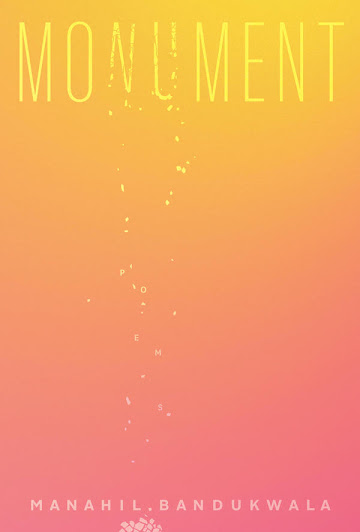 There is a curious framing around Manahil Bandukwala’s full-length debut, Monument (Kingston ON: Brick Books, 2022), a title deliberately designed on the cover with crumbling letters “n” and “u,” offering a sly dual title of “Monuments” and “Moments,” an idea reinforced through the book’s opening quote by British Columbia poet Phyllis Webb, from the opening of her poem “MOMENTS ARE MONUMENTS,” a poem first included in the second section of her Even Your Right Eye (1956) that reads: “Moments are monuments / if caught / carved into stone [.]” Of course, Saskatchewan poet John Newlove famously tweaked that particular phrasing nearly a decade later, through his poem “Then, If I Cease Desiring” from Moving in Alone (1965): “You may allow me moments, / not monuments, I being / content. It is little, / but it is little enough.” Through her use of paired titling, Bandukwala writes of and around the life (and the moments) of Mumtaz Mahal (b. c. 1593—d. June 17, 1631, Burhanpur, India), wife of Shah Jahān, Mughal emperor of India (1628–58). It was this historical figure who died but a few years into her husband’s reign, a loss that prompted him to construct the infamous Taj Mahal in her memory, where she is also entombed. “In this moment,” Bandukwala writes, as part of the poem “Ask,” early on in the collection, “I saw his love start // and end with your beauty.” There is little known of Mumtaz Mahal beyond the facts of this particular memorialization, and before this book has even begun, Bandukwala offers not only the tension of the collection, but her goal to explore the human figure out of a fixed point in stone: a moment or two, perhaps, pulled out of the monument. As the back cover of the collection informs, “Manahil Bandukwala’s debut upturns notions of love, monumentalisation, and empire by exploring buried facets of Mughal Empress Mumtaz Mahal’s life, moving her story beyond the Taj Mahal.”

There is something compelling about the way Bandukwala approaches her subject, writing the tension between memorialization and a life lived, wishing to provide this historical figure some agency, beyond the exclusive associations and depictions around her husband. The approach is reminiscent, in certain ways, of how Montreal poet SueElmslie equally worked to reclaim André Breton’s surrealist muse Nadja through her I, Nadja, and Other Poems (London ON: Brick Books, 2006) [see my review of such here], or even Stephen Scobie’s The Ballad of Isabel Gunn (Kingston ON: Quarry Press, 1987). As she writes as part of the poem/section “Unravel”:

Your children were witness
to the grandest expressions of love,
the immortalization of memory.

Structured with an opening poem (“Before, it was love”) and into seven suite-sections—“Braid,” “Love Letters,” “Threads,” “Offspring,” “Unravel,” “Last Words” and “Plait”—Bandukwala folds language and structure into her lyric, utilizing and weaving excerpts and prompts from Mohsin Hamid, Robin Wall Kimmerer, Phyllis Webb, Danez Smith and Sylvia Plath into a larger tapestry of biographical reclamation. “War elephants sway their tails in summer.” she writes, as part of the poem “1622,” “I fed them peanuts, rough skin of trunks / puffed out silk threads from my crown. Tended an empire // overgrown with hibiscus and sunflower. / Hoisted skirts and climbed up a stalk // to reach the yellow petals. I, a sun, a smile, // a swaying empire in the breeze. // You, a pollen grain, floating towards me.” There are layers and shimmerings of history and geography that ripple across this collection, offering her subject a long shadow across a country and a culture she held herself up to, and into the most human of simple moments. “Caught between the floor tiles of your quarter / in Khwabgah,” she writes, to open the poem “Flow,” “strands of hair. Yours and your daughters, // other wives and other daughters. So black, still carrying / whiffs of jasmine perfurme and pearls that looped / your curls across your cheekbones. The act // of braiding, woman to woman, of brushing the day / out of her hair, of her combing sleep and calm / dreams into yours. A moment / to be yours, where all the hair that fell // twisted into its own braid. This room // more than a monument.” This is, one might say, the moments of a life lived, however brief it may have been, with as few details as might have been recorded. Or, as Mumtaz Mahal speaks, further, through Bandukwala’s lyric, to close the poem “1631”:

Command was not
an inherited trait. Were it so,

I might have cast myself
in iron, sat atop a throne,

I, unremembered in history books,
unalive in my own life.