just as eyebrows by the brain are raised
we touch the rim around the world
with the sweet, golden liquor of thought
it tricks us
and works as far as the lips
so that meanwhile we drink down the raw
world’s juice
the intent is deceptive not malevolent
and we try to lift trees like eyebrows
squeeze history’s tectonics with our mind
make things with an I Dream of Jeannie nod
this possessive, this past, this gerund, this goat
this cow, echidna, ghost, carfentanil
pancakes, poems, dusklight
who is this “we” we make drink the world?
not birds but winspeed
what Francis Ponge writes:
words. decency. our humanism 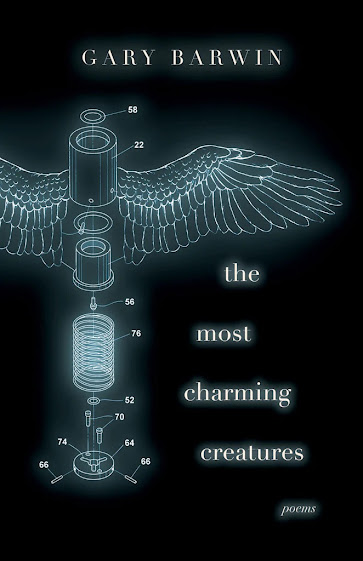 While he’s had a few other poetry projects (and a novel, in case you weren’t aware) emerge since the publication of his selected poems, For It Is a PLEASURE and a SURPRISE to Breathe: new & selected POEMS, edited with an Introduction by Alessandro Porco (Hamilton ON: Wolsak and Wynn, 2019) [see my review of such here]—including his full-length collaboration with Gregory Betts, The Fabulous Op (Ireland: Beir Bua Press, 2022) [see my review of such here], a second full-length collaboration with Tom Prime, Bird Arsonist (Vancouver BC: New Star Books, 2022) [see my review of such here] and multiple solo and collaborative chapbooks—the first post-selected solo poetry title by the dervishly-productive Hamilton writer, musician and editor Gary Barwin is the most charming creatures: poems (Toronto ON: ECW Press, 2022). The first collection after the publication of a selected is always interesting; to look at a new work after having examined, even if rather broad in scope, the length and breadth of a career in poetry, and to consider that new collection across such a wide spectrum, and not simply on its own, or even against a prior title or three. What threads are continued? What new ground might be covered? It has the potential to be quite a loaded approach, certainly.

Anchored in humanity and play, the poems in the most charming creatures: poems delight in language, offering poems that are intimate and deeply felt, including poems translating and responding to a variety of historical and literary threads, whether connecting to older works translated into English, or dedicated to some of the writers around his immediate vicinity. The poem “After ‘Gute Nacht’ from Winterreisse by Wilhelm Müller,” for example, subtitled “English translation by William Mann,” ends with: “As I leave I write / ‘Goodnight’ upon the roadside snow / so that, Dear Reader, / you see I have been thinking of you [.]” The poem “How to End a Poem,” dedicated “for Terese Mason Pierre,” offers: “burnt words / delivered in an envelope / to the mother of your enemy // the mother of your enemy / is a mirror // you’re the mirror […]” Composed as shorter poems, most of which are self-contained or grouped into gatherings, the pieces here suggest almost as a collection of occasionals, which themselves have grouped into the occasion, one might say, of the book itself. There’s a way through which Barwin’s surrealism and play with puns and banter display, most of all, a deep empathy and engagement with others, something always present in his work, but somehow more forefront through the poems in this particular collection. And perhaps that, by itself, is the difference here: Barwin wearing his heart so openly, while still allowing language and play to swirl around that particular centre.

The poem “Something Else,” composed for the late poet, fiction and travel writer David W. McFadden, is particularly striking. The middle section of the short poem reads: “Dave McFadden, you said / we should write every day / and today was your funeral // your urn was / exactly as you’d wanted: / a Dilbert cookie jar [.] It’s a particularly poignant and touching poem, and perhaps one of Barwin’s most straightforward, writing on his late friend and mentor, the self-proclaimed king of coincidence. Or this, the third in the short triptych “Three,” that reads, simply: