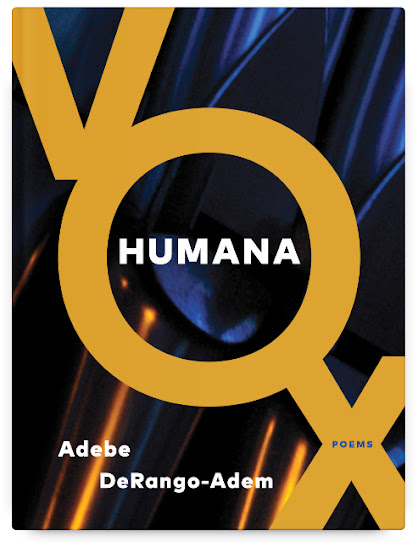 The fourth full-length poetry collection by Toronto poet Adebe DeRango-Adem,following Ex Nihilo (Calgary AB: Frontenac House, 2010), Terra Incognita (Toronto ON: Inanna Publications, 2015) and The Unmooring (Toronto ON: Mansfield Press, 2018), is VOX HUMANA (Toronto ON: Book*hug, 2022), an assemblage of vibrant and performative poems akin to chants, focusing on voice and the polyrhythmic lyric. “GREAT FOREST CHORUS OF SCREAMS,” she writes, to open the poem “VOX TELUM/MEMORIAM,” “composition in a key / of a tree reluctant to give life […]” Her poems are composed as gestural sweeps of language, utterances and tradition, song, prayer and declaration. She speaks and sings on race and identity, history and community, doing so with such force, and clearly a voice to be heard, to be acknowledged; to be reckoned with. “O COMMONWEALTH—!” she writes, to open “VOX LINGUA/MALEDICTUM,” “HEX your gilded lexicons—! I spook / the master’s   language    I see how     texts / turn white & whiter                    foam // the colour of dissolve […]”

Set in three sections—“FUGUE I,” “FUGUE II” and “FUGUE III”—DeRango-Adem sings a song-sequence against and of silence, arranged in performative gasps, gaps, staccato declarations and long, languid sweeps. These are poems to be performed, composed as passionate celebration and of witness, and her performance radiates. As the two page “VOX GENUS/PROVECTUS” ends: “a    ruckus network // of howls [.]” To open her “AUTHOR’S NOTE” to close the collection, she writes:

This collection borrows its title from a very specific musical analogy. On the standard pipe organ, the “vox humana” is a short-resonator reed stop so named because of its supposed resemblance to the human voice. As an amateur pianist, I have long been moved by the organ as an instrument, though I could never find the time/resources to learn how to play. Under the generous approval of former head organist at Trinity College (University of Toronto) John Tuttle, and during a time of great personal mourning, I was granted private access to the chapel organ, where I could conduct a music all my own (and unbeknownst to the largely white, largely male music-student body).