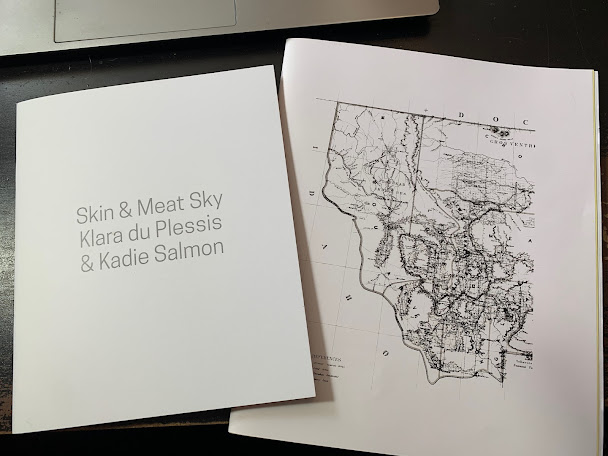 In case you weren’t aware, there’s a small press fair this Saturday at the University of Toronto Fisher Rare Book Room (free to the public, so you should totally come out for this): Fisher’s Fine and Small Press Fair, Saturday, September 10th, 10am to 5pm. I’ll be there with a variety of above/ground press items, with further participants including Aliquando Press, Alan Stein/Church Street Press, Art Metropole, Book*hug, Coach House Books, George A. Walker, Greyweather’s Press, JackPine Press, k|f|b, Liz Menard, Massey College Press, Natalie Draz, Nietzsche’s Brolly, Porcupine's Quill/DA, Shanty Bay Press and Wesley Bates. Might we see you there?

Montreal QC/Toronto ON: The latest from Montreal poet and critic Klara du Plessis [see my review of one of her prior chapbooks here] is the chapbook Skin & Meat Sky (Toronto ON: knife|fork|book, 2022), a collaboration between du Plessis’ poems and Kadie Salmon’s photography. As the colophon offers: “Both poems were written, and the photographic series developed, at Canserrat, a month-long residency in El Bruc, Spain, May 2018. Gratitude to the Canserrat staff and support from the Canada Council for the Arts.” Comprised of the six-part sequence “Cold Pigeons,” four full-colour photographs and the nine-part sequence “Skin & Meat Sky,” the interaction between the image and text makes for a curious interplay, both of which offer a physicality and presence, as well as the suggestion of being slightly beyond one’s reach. The colophon to the collection offers, as well, that the opening poem “is based on Pablo Picasso’s series of 58 reinterpretations of Diego Velázquez’s painting Las Meninas, also including 9 paintings of pigeons, which he considered part of the series.” du Plessis’ two poems offer a lyric, meditative and descriptive density through a music of clear, precise and deeply thoughtful notes. These are poems to read and reread, deserving of far further examination for their subtle movements, incredible precision and breathless pause. If this is a hint of directions still to come in her work, then I would say we need to be paying her writing far more attention. As the sixth section of her opening poem offers: “Auricular is not an oracle but the hidden / lobes / of feathers listening delicately [.]” Or the third section of “Skin & Meat Sky,” that reads:

I head towards the garden which is the museum,
encumbered by the brains inhabiting every boulder.
This mountain intelligence,
this ontological greenness.
Mountains are a form of ascension, geographically,
but also as a sequence of legs,
as utterly beautiful utensils scaling to higher ground.
At the beginning of a climb, legs are low,
but throughout the process legs are high,
thigh marking a vertical incline
knee|hinge|straightness
calf muscle bulges.
Strength acts out against itself,
then resuscitates abdominally.
To throw myself upwards is a kind of hallelujah,
but it’s also just the stomach holding torso in place.

Winnipeg MB: I’ve been enjoying what Winnipeg poet Julian Day has been working through his null pointer press, specifically the journal +doc: a journal of longer poems, reminiscent slightly of the forty-five or so issues of my own late lamented chapbook-sized journal STANZAS (above/ground press, 1993-2006), which itself was patterned after the twenty issues of George Bowering’s infamous IMAGO (1964-1974). The current issue is volume 2, issue 2: summer 2022 (or +doc.3), featuring Ottawa-area poet Robert Hogg’s “John Charley—Stacking Hay—Successful Indian Farmer” and Toronto-based poet and critic ryan fitzpatrick’s “Hibernia Mon Amour.” Through Hogg’s piece, he continues his reexaminations and reworkings of poems and drafts from the 1960s, working his unique collaboration with his younger self (something I wrote about at length as part of a review of one of a recent chapbook here), a poem titled after the title of a particular Library of Congress photo held as part of the Department of the Interior, Bureau of Indian Affairs, Flathead Irrigation Project (1947–1952). It is a curious piece, and sits in a particular farming experience Hogg would have shared from his own interior of British Columbia from an era not that much further down the temporal line. “Now that I’ve got the image,” Hogg’s poem begins, “blown up on my screen / I can see the details 1914 / Montana Reservation three / Flathead Nation / farmers making hay / why not ranchers I / find myself asking noting / the cowboy hats a mountain / in the background this / is high range land one / stands on their wagon its / wooden wheels so high / someone had to cut / four holes in the floor / boards to let the wheels / rise through roughed / a low gable of boards […]” The poem moves through a narrative that examines the photograph and the “making hay” of harvesting hay from the fields during that particular era, with pitchforks and string, offering what Hogg knows of the shared experience, although, curiously, one that completely sidesteps the complexities and implications of colonialism. Hogg’s poem is simply, and uncomplicatedly (in certain ways, naively) focused on the specific task of harvest as depicted within the photograph, and connecting it to his own childhood Cariboo experience (something that echoes with numerous of the pieces he’s been working over the past few years). It would be worth mentioning, also, his chapbook THE COLD LIGHT OF MORNING / New York City & Buffalo / 1964-1965, published online a few days ago as a pdf chapbook by fitzpatrick’s MODEL Press. You should look at that, also.

Almost set as counterpoint, fitzpatrick’s “Hibernia Mon Amour” references the offshore production platform located at the Hibernia oil field, 315 km from St. John's, Newfoundland and Labrador. fitzpatrick writes of industry versus community, writes out the capitalism-over-community implications of a fossil fuel industry on environment, geography and trauma (offshore oil rigs, the mining that prompted the Frank Slide disaster, Alberta oil fields, etcetera). He extracts and assembles a lineation of human-prompted disasters and environmental shifts, all of which have human consequence and, ultimately, a global one as well. He accumulates a lyric sentence across pages, provinces and decades, one that might come to an ultimate and terrible end. As fitzpatrick’s poem opens:

no you need to realize that the boom repeats itself but

no I’m not the one who made it personal but