offset on white crescent of bucket’s innard part
between plastic lip and hump of mushroom silhouetted
to take spinning half cut up hwy to sell the PG
creep who refused to leave the mountain who after
an agreement in good faith reneged hence
the loaner red semi driven w scant warning
over his tents, baskets, dog, kitchen things,
against bucket innard eyelid shape
extends flickering shadow of a ribbon of piss (Hamish Ballantyne, “from Hansom”)

I like what Vancouver poet Rob Manery has been doing with his print journal SOME [see my review of the second issue here] and the fifth issue, dated Summer 2022, recently landed on my doorstep, featuring work by Hamish Ballantyne, Clint Burnham, Jeff Derksen, Lary Timewell and an excerpt of a collaborative work-in-progress between Elee Kraljii Gardiner and Chris Turnbull. There is something really valuable about any journal or publisher able to publish work by writers who don’t seem to publish that often in journals, if at all (Lary Timewell, for example), as well as being open to work that might be seen as too long or too experimental for even journals interested in that kind of work. Hamish Ballantyne [see my review of his latest here] is working a larger project through a sequence of fragments, each small section simultaneously offering another and a further perspective. “practice breeds a / constellation of attendant / practices each indivisible / from the instants of their expression,” he writes, further in the excerpt included here, “Later we / if we can find each other in town / decide what they all meant […].” 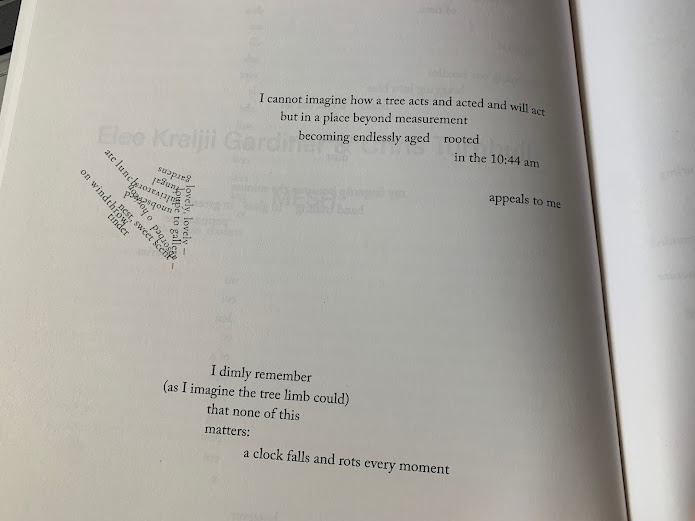 The intricate and precise layering of Gardiner and Turnbull’s collaborative “MESH” is stunning, offering folds of text wrapped across each other. They’ve a further collaboration in the October issue of Touch the Donkey I look forward to exploring as part of our interview. And as far as Timewell is concerned, it is well beyond the time when someone should be publishing a book by this poet; I know there’s an enormous amount of uncollected work he’s been sitting on, and he certainly deserves far better attention than he’s seen so far. His “Eight Poems” in this issue offer echoes and roots of his 1970s and 80s Vancouver KSW language-origins, but with an engagement in the interpersonal that runs across the foundation of his entire work.

it’s not escapades in cascades
it’s not business as usual
it’s not an unlivable wager
it’s not captivated or decorated
it’s not spurts of pleasant to recall
it’s not learning to be a good loser
it’s not you never loved anyone but yourself
it’s neither happiness not lacking in happiness
it’s not at hand it’s not out of reach
it’s not the blue funk of a sports slump
it’s not favour me won’t you with just one more smile
it’s not picking the lock in your daydreams
it’s more like thinking sweet things of others even as you slowly die
it’s more like it’s nothing like that at all
it’s more like as probably many of you will already know
it’s more like i suppose you have all heard the incriminating rumours of
it’s more (isn’t it?) like your so-called life 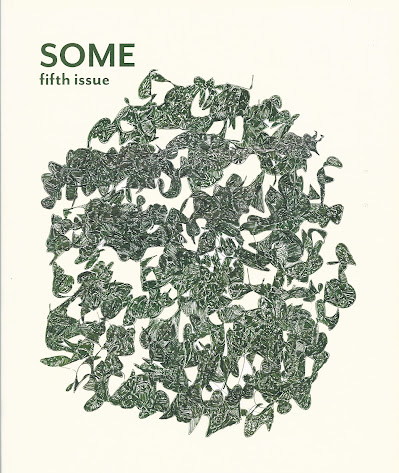 There is an approach to accumulated language and political writing that both Burnham and Derksen engage with that sits in a similar realm to other current and former Kootenay School of Writing practitioners; their work reminds of a similar flavour to that of Winnipeg-based poet Colin Smith, for example [see my review of his latest here]. For those aware of any of his numerous collections, Derksen’s four poems here offer elements of both the familiar and the unfamiliar, including a prose piece, “On a Generation that Squandered its Future” (I can’t remember the last time I saw a Jeff Derksen poem set in prose” that begins: “I was working in a gas station, a greenhouse, in delivery, in gardening, / in editing, in teaching, in administration. The weather has a new name and it / is no longer Elizabeth.” The shift in patter, patterns, is curious, while still retaining the accumulative effect of the long thread, writing language across issues of labour and capitalism. Burnham’s piece is an extended poem with a curious title, “letter from Mount Pleasant to Manhattan (on Kevin Davies’s The Golden Age of Paraphernalia, Edge Books, 2008),” suggesting an enormous amount going on through this particular poem, accumulating some fifty to sixty stanzas of piled phrases collaged together to form something far larger, and far more complex. “before her if I have to spell,” he writes, early on in the poem, “it out for you thereby taking // the pamphlet from the / Western Front listing two / dozen Chinese restaurants / nearby now, twenty-odd / years later, I wonder / what the German / sisters are doing now are / they still perpetual / students or did they finish // their degrees and training, / work for a while in the Harz / mountain village their / family originated from […].” There are a lot of directions to grasp this poem, less threads than individual points, and it makes me curious to see this particular Kevin Davies title to get a better sense of how Derksen might be responding to that particular work. Further on, writing: “[…] who // remembers Lorem ipsum, / clip art, clip joints, I’ll / give you a clip on / the ear the / sound of small bits of / gravel and grit under / tires turning (but not rolling, if / you catch my drift) […].” Alternately, the first section of Derksen’s “Anonymous Fanon Poems,” reads:

That which is choking
you is also choking me

but its tight mesh
the police
the army
the state

is not from you

nor others
under a blight

and I will lose it last
following first after 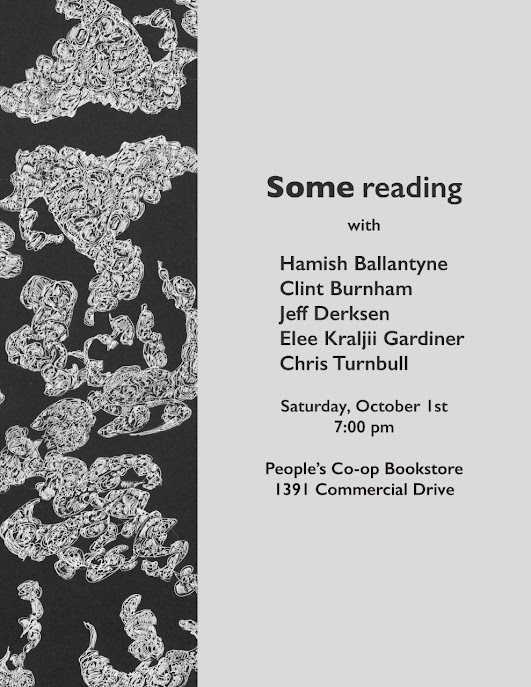 I don’t know who carries copies (ie: stores, etcetera), but the colophon writes that correspondence can be direct to: somepoetrymagazine@gmail.com and that “Subscriptions are $24 for two issues. Single issues are $12. E-transfers are welcome.” Also: note that the reading/launch listed here is in Vancouver, British Columbia.