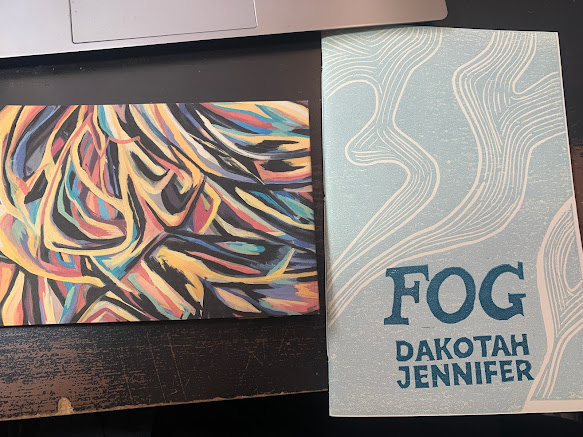 Calgary AB: I’m just now going through Leguminosae Delusion Athletics (Calgary AB: The Blasted Tree, 2021) by Andy Martrich and Nicole Raziya Fong, a lovely hand-sewn chapbook produced in an edition of sixty copies. Leguminosae Delusion Athletics exists as a collaboration between Martrich, an American writer living in France, and Fong, a poet based in Montreal. Moving through the assemblage of text and image, the long poem is set as a sequence of untitled and seemingly self-contained bursts of text, one per page, writing a thread referencing a particular family of plants (beans, legumes). There is a curious way both the text and the artwork curl in and around, wrapping meaning and image around and across a sequence of accumulating threads. “Ready to create a family and shelter to cache,” one section begins, “preservation and canned goods // Constructing a snow fort / nodding and grinning with nonverbal / understanding of the day // Attempting to wake the kids with a bullhorn / while bright and coiled in packed ice / Spy vs. Spy where one begins the end of the other / bordering spoiled iconography [.]”

According to a note on the chapbook included on Fong’s website: “Leguminosae Delusion Athletics is a collaborative poetry and art project about representative absence. Dynamism is treated as a form of ritual delusion throughout the long poem, composed by Andy Martrich, lingering on the cusp of afflictions that can’t be undone. The accompanying art, by Nicole Raziya Fong, draws from cues in the text, corresponding to different sections of the poem and mirroring the disassemblage of apparent forms and figures.” As the opening piece reads:

New Jersey: Behind on everything, but just now getting to Dakotah Jennifer’s chapbook debut, FOG (Bloof Books, 2019). According to the author biography at the back of the collection (information three years out of date now, obviously), “Dakotah Jennifer is an eighteen-year-old black writer currently attending Washington University in St. Louis.” There is an impressive clarity and liveliness to the work here, no matter how old the author might be. This is a lyric that strikes, in part, for its directness. “How do you travel from south carolina to New York in bare feet.” she writes, as part of “The American Protection Against Black Violence Act,” the poem that opens the small collection. “Who was the president in 1863. / Why did he free the slaves. / What is the definition of an ally. / Do you know what the paper bag test is. Do you approve.” She writes how history impacts the present, writing on race, politics and social issues. As her author biography continues: “Jennifer writes about race, class, and gender, stretching her emotions into tangible things. She strives to write things that grow.” Given the strength of the poems assembled here, I am expecting great things from Dakotah Jennifer, and not simply just the possibility of a full-length debut; there is a powerful, passionate and patient resolve to these poems, one that works to document and articulate, in not just an abstract hope but a pointed demand for something better.

You want to know why they ask you for proof,
For evidence in the case,
You know they’ll never indict a man they see themselves in
But you try anyway.
You want to know why you don’t cry when they boys are dead
but when they are alive.
Why you mourn the country and not the fallen.
You count stars as if they are not already dead.
You tell oblivious boys you love them and then run away with it.
You know only what you have been told about the struggle,
But also what you trek through every day.
You don’t believe the reports until you see the footage.
You cringe at the gunshot before you realize they did too.
You write poems about boys that aren’t dead or dying,
You make them immortal when they already are.
You write down black and it turns to dust.
You hope to exist but disappear in the mirror.
You research hate crimes to give them the numbers.

They don’t believe you.