today is my fifty-second birthday; 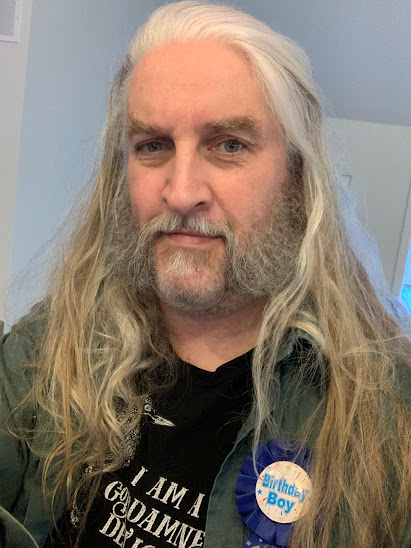 My third pandemic-era birthday. How am I feeling? I’m not exactly sure; I’ll admit to feeling an unease about moving in through my fifties (although: aging is far preferable to death; remember, that my long-running plan includes an eventual passing at the age of one hundred and five). And, given my fiftieth was scheduled two days after original pandemic lockdown, I decided some time ago that I would remain in my forties until this whole period passes (it only seems fair), to only enter my fifties once this is over. To enter my fifties, as one might say, “already in-progress.” We are home, we are home, we are forever home. Staycation day #732, by my count, although Christine has begun the occasional day in the lab over the past couple of weeks (including today). The children remain in their e-learning, at least until the end of the school year.

Where was I last year? The year before that? All of that, in the house.

This morning, Christine and the wee girls an array of cards, gifts. Christine always picks me up curlywurlys from the Scottish and Irish Store, as I recall them from my eastern Ontario childhood; why were they easily available then but not now? Had they a different name? Yesterday, a birthday card from my birth mother, and a text from my eldest. This morning, an email from sister, and half-sister. This morning, before I awoke, as Christine attended Aoife, who barfed into her hands and ran to the bathroom (after which, she claimed, she felt far better). And now, as they’ve breakfasted, downstairs with tablets and Netflix. Christine at the lab.

Note the button I wear in the photo: yes, I shall be wearing this all week (had it on since Sunday, already).

Yesterday, I cleaned the house (convincing the young ladies, finally, to work on their room). Worked on some reviews, addressed an above/ground press mailing. Aiming to spend the next few days reading, perhaps working on novel, or poems, or both, given the clearer-space that March Break allows (not having to worry about e-learning schedules or Guides/Sparks or forest school or anything else). The novel I began during the summer of 2020 (that I haven’t look at since November or so), with pandemic in background of a series of character-threads, including the character Alberta, introduced in my second novel, and furthered through a handful of short stories. Where is she now? The novel, Missing Persons, that wrote her teenaged self near a fictional version of Lumsden, Saskatchewan in the 1980s, an array of short stories that have written her at various points throughout the space in-between there and here, and the new novel, now, as she sits in her empty, widowed house, zoom-calling her preschool-age grandson and slowly working her novel. Everything takes so damned long, it would seem.

Today I am at my desk. Yesterday I was at my desk. Most likely dropping off new above/ground press titles off at the printer’s today. Most likely. Most likely also working on final edits for my fall book with Mansfield Press, a suite of pandemic essays composed across those first one hundred days of lock-down, essays in the face of uncertainties. Stuart Ross has done a remarkably thorough and thoughtful edit. Hoping to be able to use, for cover, the photo that Stephen Brockwell took of us, through our living room window.

And poems. Including this one, my annual birthday missive:

of this single room. To hear sound

with equations. The math        is nigh impossible.

a glass, reflects. This breath by breath. Half-century, plus. A hand
between palms.

PS: AND ACCORDING TO CANADA POST, COPIES OF MY NEW POETRY TITLE WITH UNIVERSITY OF CALGARY PRESS (CURRENTLY AVAILABLE FOR PRE-ORDER), SHOULD BE LANDING ON MY DOORSTEP TODAY?

Tomorrow is my third pandemic birthday. (I'll be 47. Whatever.) Just here (via Via Negativa) to say, I hear you, and I'm right there with you.