imagine there were no oppression to shape our identities. instead:
limitless forms of descriptive difference not essentialized and
politicized by violence. if we were to say I in such a world, we might
mean almost nothing but a historied, futured, networked locus of
desire 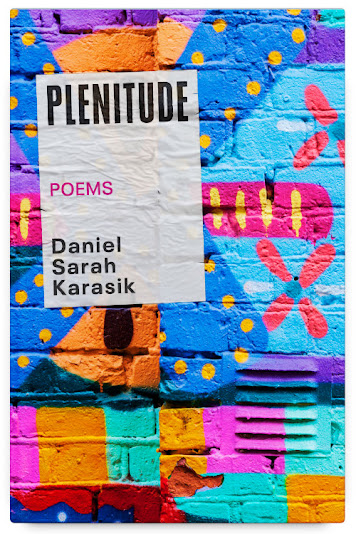 Toronto writer and organizer Daniel Sarah Karasik’s fifth book and second poetry collection, following the full-length poetry debut, Hungry (Toronto ON: Cormorant Books, 2013), is Plenitude: Poems (Toronto ON: Book*hug, 2022). Composed as a collection of urgencies, desires and reclamations, Plenitude is composed in six sections—five sections of shorter lyrics and a long poem—and opening salvo, the short lyric burst “messianic time.” As Karasik writes as part of the poem “radiant incipience”: “when the police locked comrades / in the library and lied / about it, our chant said / trans rights are human rights, / but what we meant was / rights won’t save us / if we don’t protect each other.” Plenitude offers a lyric attending to “our difficult present,” writing the imperils of police brutality, anti-trans violence and of the possibilities of a body not held by gender boundaries. “as in strife and envy and competition and violence yes sometimes / ineluctably violence but outside the death cult of capital,” Karasik writes as part of the sequence “trans-socialist,” a poem that makes up the entirety of the book’s second section, “of the wage. // as in no bosses no cops no shortcuts no utopia no final peace no (in / the final analysis) final poem against the police.” Or, as part of the title poem, which opens the third section: “Interchangeable / to suit the day. And also would like Gender / to be overthrown, and every woman / now alive and also every boi / to adore me—goals / that need not be contradictory.”

In Plenitude, Karasik writes a lyric around gender, writing into a sense and a self, including the political mechanisms of required resistance to exist as a transgender person in the world, as well as the energies required, and the exhaustions that would surely follow. “The poets have described the world;” they write, to close the poem “Regarding the Prophetic Tradition,” “the point, however is / to change / yourself into the kind of person / who can suss out where the most / effective point of struggle is / and go there, or support those / who are there already, on life’s side. / And to get free. Which is to say, / to sing desire into a loving, / fighting sociality.” At turns the poems are, as John Elizabeth Stintzi suggests via cover blurb, political, frisky, personal and furious, as Karasik writes of being in the world as, by itself, the purest act of resistance; a way through which to safely emerge and safely love. As the title poem ends:

I don’t as much.
I blink, demure.
Solicitously, I extend
my round bottom to you.