Stuart Ross, The Book of Grief and Hamburgers

When I worked with Dave McFadden on his volume of selected poems, Why Are You So Sad?, I thought we would reproduce the poems exactly as they had been originally published, and in chronological order. But first the order thing: Dave wanted them to appear in random order. He presented me with a random order for the poems in the book, but I think the order wasn’t entirely random. Dave was wily that way. But the other thing: Dave wanted to edit his poems for this new volume. He was a better poet now than when he had originally written those poems in the 1960s and 1970s and 1980s, and he could make those poems better. In several of his poems from the 1960s, Dave replaced the word love with the word thing. And it was true: it made the poems better. 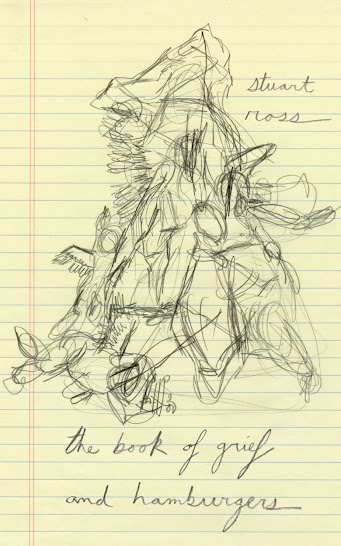 The latest from Cobourg, Ontario poet, writer, editor and publisher Stuart Ross is The Book of Grief and Hamburgers (Toronto ON: ECW Press, 2022), a blend of essay, memoir and prose poem that moves its slow way through and across an accumulation of grief and personal loss, attending the personal in a way far more vulnerable than he has allowed himself prior. As the back cover attests, The Book of Grief and Hamburgers was composed “during the second wave of the COVID-19 pandemic, shortly after the sudden death of his brother – leaving him the last living member of his family – and anticipating the death of his closest friend after a catastrophic diagnosis, this meditation on mortality is a literary shiva, a moving act of resistance against self-annihilation, and an elegy for those Stuart loved.” The form of lyric homage and recollection certainly isn’t new, although one might think it not as prevalent as it might be, and I can only think of a handful of examples in Canadian writing over the past thirty years, such as George Bowering’s book of prose recollections, The Moustache, Memories of Greg Curnoe (Toronto ON: Coach House Press, 1993), James Hawes’ writing Peter Van Toorn through his new chapbook Under an Overpass, a Fox (Montreal QC: Turret House Press, 2022), Erín Moure writing her late friend Paul through Sitting Shiva on Minto Avenue, by Toots (Vancouver BC: New Star Books, 2017) [see my review of such here], or even Sharon Thesen writing Angela Bowering through her Weeping Willow (Vancouver BC: Nomados, 2005), a chapbook-length sequence that later landed in her full-length The Good Bacteria (Toronto ON: House of Anansi, 2006).

The difference in the examples I’ve cited, of course, is that each of these were composed around a single person, whereas Ross explores the layering and accumulation of grief itself, one that has built up over the years through the deaths of his parents, and a variety of friends, mentors and contemporaries including David W. McFadden, Richard Huttel, John Lavery, Nelson Ball and RM Vaughan. While this particular project was triggered by the sudden and unexpected loss of Ross’ brother Barry in 2020, twenty years after the death of their brother, Owen, and through hearing of the terminal cancer diagnosis of his longtime friend, the Ottawa poet Michael Dennis (one shouldn’t overlook, as well, the simultaneous loss of their beloved dog, Lily), all of these relationships are referenced, explored and layered through an attempt, through the narrative, to come to some kind of, if not conclusion, an acknowledgment of how best to allow for this space, and to move forward.

There is very much an “I Remember” element to Ross’ collection—from Georges Perec’s infamous Je Me Souviens (1978), which was, itself, influenced by Joe Brainard’s I Remember (1975)—but one that moves through the larger subject of multiple connections and ongoing conversations. In certain ways, Ross examines the subject of grief in ways similar to American poet Heather Christle writing on the subject of crying in her own non-fiction memoir, The Crying Book (New York NY: Catapult, 2019). And still, unlike Christle’s exploration blending memoir with studies, stories and statistics, Ross works through a far more personal list of references, including elements of his prior writing and personal library, and recollections of each of those friends and family members.

Is the death of one person the thing that launches grief? What about two people? Or three or four? What happens when your entire family is gone?

So many members of my family disappeared in the Holocaust. How can I even complain about anything?

Am I mistaking self-pity for grief?

There is an interesting way he threads a conversation through the bones of the narrative, exploring how he’s written heavy subjects over the years, adding the word “hamburger” to poems (although I’ve long seen his use of the word “poodle” in similar terms) as a way to lighten, acting as both distraction and counterbalance against his darker (self-described “sad sack”) impulses. And yet, who, at any given point, wouldn’t wish to distract themselves from overwhelming loss? The distance he travels and the ground he covers through The Book of Grief and Hamburgers is quite extensive, and, despite knowing that such projects aren’t enough to properly process any amount of grief, there is certainly something to be said for capturing such examinations in print. This really is a remarkable book, as Ross writes of grief and he writes of hamburgers, fully conscious of how the word had become a personal kind of safe-word. He connects this string of losses, and the tether that pulls once more as each new loss takes hold, even as he catches himself lob a hamburger into the fray. Although, I, myself, might have hoped for more poodles.

This book feels like one big hamburger. My intention was to make myself face things I don’t think I’ve succeeded in facing.

To make myself cry.

To make myself mourn.

To hurl myself into the bubbling vat of grief.

It’s not like I don’t cry, though. I cry pretty much every day, even if just for a moment.

But isn’t grieving more than crying? Isn’t it a “coming to terms”?

I want to force myself to come to terms. That’s what I’m trying to do here.

Won’t you please join me?