this boat tries not to carry tremolite-actinolite from vermiculite mined

400 dead to date from asbestosis

nor the non-viable evidence that it was not murder

this boat contains whatnot and ecological thought all partial and mortal 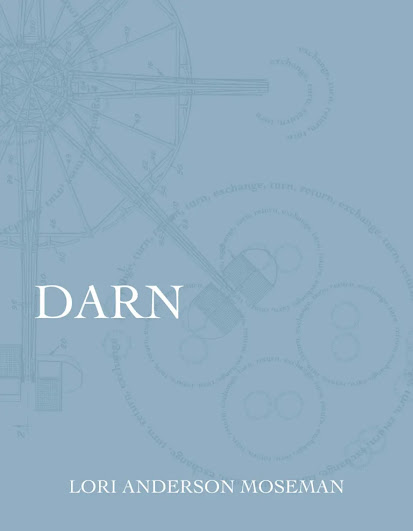 I’m fascinated by American poet Lori Anderson Moseman’s assemblage of text and image, the poetry collection DARN (Delete press, 2021). DARN is composed as a gathering of sentences, phrases and images patched and stitched and sewn together into a kind of lyric quilt. There are elements here reminiscent of the work of Kemptville, Ontario poet Chris Turnbull, utilizing a blend of photograph and text, although Turnbull’s work is more of a 3-D whole that includes text, whereas Moseman works very much in the lyric mode, utilizing fragment and photograph, as well as text, as structural elements of her lyric framework. I am reminded, instead, of some of the visual stitchwork of Erín Moure, photographs of stitched pages, elements of Toronto poet Kate Siklosi’s visual poems, or even the collage-effects of the poems of Susan Howe, the image of one line layering atop another. Moseman’s work also includes echoes of Perth, Ontario Phil Hall’s work, attuned to the precision of the physical lyric and the physical object, offering a particular reverence, with each object and phrase resonating off each other. “if infinitesimal text,” she writes, as part of the opening section, “from ‘The Little Man from Nuremberg’ could each us tolerance //// perhaps we have the tools we need        to house       Syrians camped // in Jordan waiting for world powers to broker a temporary peace // not pictured an Egyptian Copt selling vintage santas on a seashore // flea market in California to earn money to help refugees in Lebanon [.]” She writes of world events and local gestures, the impact of each deeply felt upon the other. I like the way her lyric simultaneously leans into the memoir, the essay and threads of history, weaving multiple approaches together into a singular, quilted structure of deeply-felt, and deeply-considered, offerings:

The structure of the book is segmented into sections, the first of which, “DARN,” includes the extended structures “there’s a hole, dear lyre” and “there’s a glitch, dear orbit,” and “OH WELL,” made up of the extended sequence “shoot.” There is such a physicality to her lyric, one that weaves together sewing, text, photographs and legal text, archives and story-excerpts and even patents. “darners like pie tins like baskets                        carry great distances / buffer zone,” she writes, in a couplet that is set on the page to read two possible ways: “darners like pie tins like baskets / buffer zone / carry great distances.” The ebbs and flow of DARN simultaneously offer multiple ways of thinking, suggesting and being, and no answers, but an invitation to explore more than one perspective.

Although this is the first I’ve seen of her work, Moseman is the author of numerous titles including Cultivating Excess (The Eighth Mountain Press, 1992), Persona (Swank Books, 2003), Temporary Bunk (Swank Books, 2009), All Steel (Flim Forum Press, 2012), Flash Mob (Spuyten Duyvil, 2016), Light Each Pause (Spuyten Duyvil, 2017) and Y (The Operating System, 2019), as well as a collaboration with artist Karen Pava Randall, Full Quiver, from Propolis Press. I’m fascinated by the ways in which history, memoir, the archive and multiple other elements are folded into the lyric of DARN, incorporating into the larger structure, and even the larger narrative, of the book. Darn, she titles, playing off both the exclamation of frustration and the stitching together. Through her lyric quilt, Moseman offers a collection on what holds us, and what holds us together, and what might save, and even redeem, us yet.