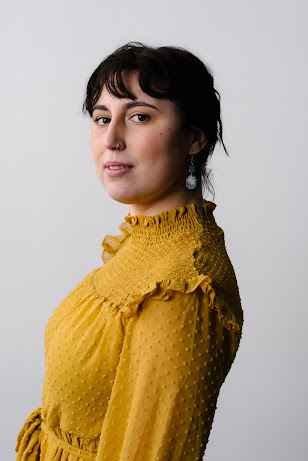 Sydney Hegele (formally Sydney Warner Brooman) lives in Toronto, Canada with their fiancé and French bulldog. They are the author of the short fiction collection The Pump (Invisible Publishing 2021), and an alumnus of the Tin House Summer Workshop (2021) and the Lighthouse Summer Workshop under Sheila Heti (2021).

1 - How did your first book change your life? How does your most recent work compare to your previous? How does it feel different?
Having a book out has allowed me to have a lot of interesting conversations with people who care about the same things that I care about, through workshops and readings and festivals–opportunities that I’ve only really started getting since The Pump was released.

The current project I’m working on feels very different from The Pump. Short stories feel like little lightning strikes to me – like bright bursts of moments or feelings or realizations. Novel writing feels like building a dollhouse. Slow, careful painting. Designing little objects. The Pump felt easier somehow, like twelve short trips up and down steps, back and forth, going back over the ground I cover, whereas writing my current project feels like walking a tightrope.

2 - How did you come to poetry first, as opposed to, say, fiction or non-fiction?
As a kid, I wrote a lot of nonfiction. I would create little books about subjects I thought I was an expert on, like My Big Book of Art, or My Big Book Of Dolphin Friendly Tuna. I came into poetry when I was about eleven, and fiction-writing when I was thirteen.

3 - How long does it take to start any particular writing project? Does your writing initially come quickly, or is it a slow process? Do first drafts appear looking close to their final shape, or does your work come out of copious notes?
I’m a notorious “edit while I work” kind of writer. My first drafts usually take me a long time, but once they are done, the line edits in subsequent drafts are a lot easier because I’ve already put a lot of thought into the diction and syntax. My second drafts are usually the most difficult, where I figure out what I’m really trying to say and how I’m going to say it.

4 - Where does a poem or work of prose usually begin for you? Are you an author of short pieces that end up combining into a larger project, or are you working on a "book" from the very beginning?
I write all my fiction scenes as dialogue on my phone first, with little notes in between like “insert description of house here” or “paragraph about what it means to be a mother”. My very first drafts of anything look very much like screenplays, with character action in-between lines. If I think a scene is working, I transfer it to my computer and add everything else (thoughts, actions, descriptions). I have one master document where the book itself is written in order, but I’m normally cutting and pasting these pre-made scenes into the master rather than writing in the document. I’m a pretty intuitive writer in terms of drafting whatever scenes I feel like writing at one moment, but I always like to have an anchor document where I can see my progress in a linear way.

5 - Are public readings part of or counter to your creative process? Are you the sort of writer who enjoys doing readings?
I read all my fiction out loud in front of my computer as part of the editing process to see how it sounds before I submit anything anywhere, so readings feel like a good extension of that. I’m a former theater kid, so the musicality and cadence of my lines, even in fiction, are important to me. I see readings less as reading a piece and more as performing it for others. If I have lines that I wouldn’t want to read out loud to someone, I wouldn’t include them in the final draft.

6 - Do you have any theoretical concerns behind your writing? What kinds of questions are you trying to answer with your work? What do you even think the current questions are?
I feel like my work is frequently trying to answer two questions. The first is, can good people do bad things, and vice versa? And the second is, is it possible to separate where you grew up from who you are? I think about these a lot, and I don’t think my work fully succeeds in answering them, but rather, works very hard to look for the answers.

7 – What do you see the current role of the writer being in larger culture? Do they even have one? What do you think the role of the writer should be?
I think that writers can have a lot of different roles. The ones I personally find important are to make readers feel seen, heard, and represented, and to encourage/mentor the next generation of writers behind us.

8 - Do you find the process of working with an outside editor difficult or essential (or both)?
I find it essential to my work. The Pump owes so much of what it is to Annick MacAskill. Finding an editor who had the same vision and excitement for my work as I did really turned my work into what it needed to be.

9 - What is the best piece of advice you've heard (not necessarily given to you directly)?
When I was twelve, a woman sitting next to my mother and me on a GoBus told me that life is not about finding the right person, but about being the right person. I haven’t been able to shake that moment from my head since. I think about it often.

10 - How easy has it been for you to move between genres (poetry to fiction to screenplays to non-fiction)? What do you see as the appeal?
Although I do write in different genres, I find switching between projects very difficult. Even switching between a short story and a novel is hard for me. When I’m writing something that I want to submit somewhere, I think about the project all day every day until it is finished. To me, each new thing is at the bottom of a lake, and I need time to swim down farther and farther to get to the heart of what I want to write about, and if someone were to tell me to come up for air and dive into a different lake, I would say “But I need time to swim back up!”

11 - What kind of writing routine do you tend to keep, or do you even have one? How does a typical day (for you) begin?
I admittedly don’t write every day. I’ve tried things like morning pages, but they don’t really work for me. I write the outlines and dialogue of my scenes on my phone in bed or while I’m on transit whenever I feel like it. When I have a day off from work and can finally write out the scenes I want on my computer, I have a backlog of them from my phone to choose from. When I’m on deadline, I write new material in the morning, and edit at night, as many days as I can without burning out.

12 - When your writing gets stalled, where do you turn or return for (for lack of a better word) inspiration?
My writing usually gets stalled when I think a piece or a chapter isn’t working, and I don’t think that it’s fixable. Rather than throwing it away like I want to, I show it to a friend, usually another writer, who can help. I don’t often run out of things to write about, but I am often frozen by the fear of writing something bad.

13 - What fragrance reminds you of home?
Algae and rotting fish (Lake Ontario)

14 - David W. McFadden once said that books come from books, but are there any other forms that influence your work, whether nature, music, science or visual art?
A few are lake Ontario and the Niagara escarpment, Pre-Raphaelite art; summer camp songs, used cars, and borrowed, stolen, and inherited objects that sit around houses. I’ve also had a couple of strange jobs that bleed into a lot of house descriptions that I write (I spent one summer as a pioneer village actor, and another as a house brick and patio stone house supplies salesperson).

15 - What other writers or writings are important for your work, or simply your life outside of your work?
Gordon Korman and Roald Dahl are definitely the reason I started writing so young. I think that every writer has that one book they read at a young age where you read it and go “Oh, that’s why they care about the things they do” and mine is Danny The Champion of The World. If I had to choose one thing that my writing is about, I would choose “complicated parent-child relationships in strange, almost surreal scenarios”, and so much of that comes from Dahl.

Currently, I’m obsessed with Brandon Taylor’s work (including his newsletter).

16 - What would you like to do that you haven't yet done?
I hear that Goat Yoga has really taken off. I’d like to try some Goat Yoga.

17 - If you could pick any other occupation to attempt, what would it be? Or, alternately, what do you think you would have ended up doing had you not been a writer?
I wanted to be a marine biologist when I was young, until I realized I was afraid of accidentally touching fish. This writing thing is probably for the best.

18 - What made you write, as opposed to doing something else?
I’ve never entertained the idea of not writing. Every time I have a career-related existential crisis, I always imagine myself taking on a new career in addition to writing books. I think I will be writing new work right up until I die. I can’t imagine a life where that isn’t the case.

20 - What are you currently working on?
I’m redrafting my debut novel before it goes out on submission with my agent early next year. It’s about sirens (the bird kind) and taxidermy and priesthood and fortune-telling and carnivals and tourism and motherhood and some other things. It’s ruining my life (in a good way?)