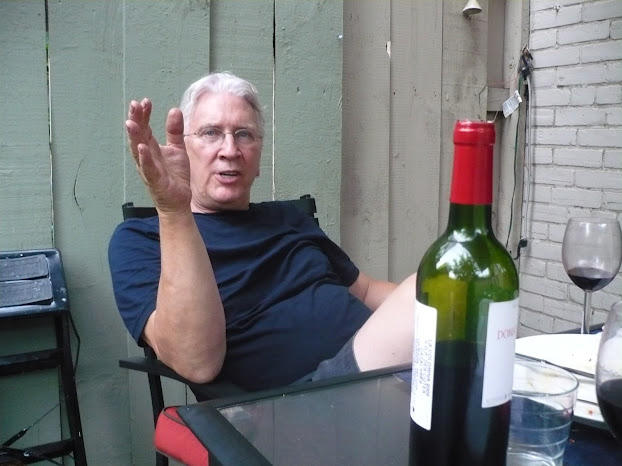 Sad news out of Toronto, hearing that Brian Fawcett died this past Sunday night after an extended illness. Strange to think I’ve known him some twenty years, as one of our early in-person encounters came through Prince George, British Columbia poet and publisher Barry McKinnon, prompted by a Toronto reading we were doing together to launch our 2004 Talonbooks. There’s a photo I can’t find of our post-reading assemblage, as both Stephen Brockwell and the since-late Priscila Uppal were simultaneously amused and confounded by Fawcett’s smartass remarks, including his numerous comments upon the length of my hair (he heckled similar, during the event). Fawcett spent years taking swipes at my hair, at more than a few readings. Once, at a festival. I suspect he was jealous.

I’d long been aware of Fawcett as a writer, having latched, somewhere in my twenties, to the “Sex at 31” poems that he and McKinnon had originated in Prince George back in the late 1970s, when the two of them decided on an open-ended sequence of self-contained poems to be completed every seven years from their age at the time, thirty-one [see my longer note on such here]. At that point, Fawcett was right in the mix of it all, and published an array of poetry titles throughout the 1970s and into the 80s, before he seemingly abandoned poetry for prose, leaning hard into a career as a journalist and public intellectual. He authored numerous books of non-fiction, writing fearlessly on subjects that others might have hesitated to touch, including Cambodia: A Book for People Who Find Television Too Slow (1986), Gender Wars: A Novel and Some Conversation About Sex and Gender (1993) and Virtual Clearcut, or The Way Things Are In My Hometown (2003). Later on, he co-write a book on one of his mentors, Robin Blaser (with Stan Persky; 2010) [see my review of such here], and a really touching and self-aware memoir on his late parents, Human happiness (2011) [see my review on such here]. He approached the lives of his parents, and elements of his own, as well, with the same rigor he approached anything else he had worked on. He was an intellectual who wore his working-class roots on his sleeve, and wrote prose that was unsentimental, with no patience for nonsense, but approached with his full, open heart. He wrote straight to the point, whether you liked it or not (and you were welcome to disagree). I’d be curious to go back into some of these works, to see how certain may have aged, although I suspect not as much as one might think; each one highly readable, entertaining and moving at a speed of thought that might otherwise seem impossible.

For a period, he seemed very much an outlier, approaching the work of the public intellectual out of a literary upbringing and roughneck northern British Columbia, deeply attentive to community engagement, and the importance of how a story gets told. Having spent years engaging with literary journals and figures including The Capilano Review, Barry McKinnon, George Bowering, Sharon Thesen, George Stanley and Robin Blaser, he expanded his writing through a variety of subject matter that converged where politics, policy and social justice were forced to contend with his skepticism. As part of the same, he co-founded the online Dooney’s Café with Stan Persky in 2001, where he regularly engaged with politics and literature.

There was a period of time, circa 2009-10, that I was spending more time in Toronto, crashing in either Fawcett’s spare room, or out in the coach house behind their house, which allowed for us to get to know each other a bit better. He was amused by my enthusiasms, and proudly showed me their coach house, converted by him into a small office/studio, surrounded by tomato plants. In August 2010, I arrived to housesit for a week or so, with only Brian on-hand to hand over keys. Before he left, we had dinner (from whence my photo of Brian emerges), and I was provided lengthy instructions on how to daily water the dozens of varieties of tomato plants that surrounded their yard, up the fire escape and across the rooftop deck of the coach house: a barrel of yesterday’s water to feed the tomatoes, and another barrel to fill (because the temperature out of the hose would have damaged the plants). It took more than an hour, each time. He’d managed to secure seeds from numerous places, including some he said near impossible to find. He was working, he said, on a book. At one point, he made me a toasted tomato sandwich, slathered with mayonnaise and sprinkled with sea-salt, something I never would have considered (disliking tomatoes and mayonnaise, for example). It was perhaps the finest sandwich I have ever had, and I say with no exaggeration that it was a sandwich I still think of.

I was also told if I touched the good wine while he was gone, he would murder me. Don’t drink good wine, he warned me, because its expensive, and you’ll be ruined for the cheap stuff. He still blamed a particular friend for getting him into good wine.

Brian Fawcett had a sharp mind, and a devastating wit. He didn’t miss much, it would seem. Most of the times I’d hear from him at all (but for some emails from last year, tantalizing me with photos of a poetry manuscript he was supposedly working on that he then refused to discuss) were in response to some bulk email I’d sent out, lambasting whatever author it was, wondering how I could publish such drivel. Don’t they know how to use sentences? After a while, I wondered if that’s why I kept him on those lists, to be able to hear him respond in some offhand, gruff manner. Knowing full well he enjoyed the conflict. The more time we spent together, the more confused he seemed by me, until realizing, he claimed, that I was “ambitious, but not competitive,” which he considered entirely his opposite. He also suggested I should write a “straight” novel, just to show that I could. And, once it was published, announce loudly how easy it was to write, all of which would make it easier to get my more lyric works of fiction published. During the same 2010 visit, he answered a call from a phone scammer, and delighted in putting them in their place. Two years ago, he offered me this piece of advice as well, out of the blue:

Some literary advice: find a writer/poet whose work you dislike intensely, and beat the living crap out of him/her for a specific book/text.

It’ll make people listen more carefully to you.  You have a reputation of being too nice, too unwilling to give offense.

Perhaps he’s right? Perhaps I have been doing this wrong all along. He was always one for a good brawl, it would seem. He posted a bit more than a week ago on Facebook that he was on the way out. He was dying anyway, and had better things to do. We knew it was coming, and had been for some time. I shall miss his humour, his engagement and his fierce intelligence. I shall miss the ways in which he challenged my thinking. I shall miss his endless array of literary gossips and tall tales. I shall miss his kindness.

Posted by rob mclennan at 8:31 AM
Labels: Brian Fawcett, obituary

I'm so sorry to hear this. I never met him, but have been a serious fan since I read Cambodia..

He came to my mind only a few days ago and I thought I must look to see if he had anything new out to read.

Thanks for sharing this personal tribute to Brian. The first time I realized that Brian was going to be a serious writer was the day he took me for a Coke at Lloyd’s Drive In….a Prince George hang out in the early 60’s. He plunked a pile of writing (about 8 inches deep) into my lap and wanted my opinion. I was 16 and hadn’t really got my brains yet….I remember being amazed and overwhelmed. There are so many Brian Fawcett stories from these days. I will miss him.

Just thought of his novel Cambodia today and looked it up online to remind myself of the full title and was sorry to discover that Mr. Fawcett has died. I read that book in the late 80’s when I was still in university. I found it challenging and rewarding at the same time. I think it had quite an impact on me. My condolences to those who knew him, he must’ve been quite a guy.