My first encounter with Robin Blaser’s poetry was in 1960. I was a nineteen-year-old sailor stationed at the American naval air base at Capodichino, Italy, just outside Naples. Harold and Dora Dull, a couple from the San Francisco poetry scene, whom I’d met the year before at Sunday afternoon poets’ meetings there, had arrived for a sojourn in Europe and were staying in a small fishing village, Amalfitano, along the Amalfi coast just south of the bay of Naples. On Friday afternoons, I left the military base and took the bus from Naples to spend the weekend with them. […] The first weekend I arrived at the eyrie they’d rented above the sea, Harold handed me a copy of a recently written poem that he’d brought from San Francisco. It was by Robin Blaser, a San Francisco poet who had been living in Boston and working as a librarian at Harvard, and whom I knew of only from talk in San Francisco that placed him as one of a literary threesome that included Jack Spicer and Robert Duncan. They had all been classmates at the University of California in Berkeley at the end of World War II. The poem Harold handed me was called Cups and was Blaser’s first “serial” poem, the form Jack Spicer had invented a couple of years earlier in his book After Lorca. (Stan Persky) 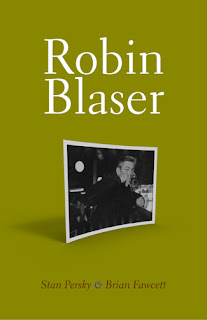 In the new book, Robin Blaser (Vancouver BC: New Star Books, 2010), Vancouver writer Stan Persky and Toronto writer Brian Fawcett each write lengthy essays on Blaser [see my obit for him here] the writer, the mentor and influence, from their own perspectives, going back well into the 1960s. Written in homage to the late Vancouver poet, mentor, teacher, composer, intellectual and friend Robin Blaser, who was the last surviving member of the trio of poets that made up the San Francisco Renaissance of Blaser, Robert Duncanand Jack Spicer. It’s interesting that both came to Blaser first through the poetry to become poets themselves, turning finally to non-fiction as their eventual and individual forms, and the two pieces, Persky’s “Reading Robin Blaser,” a more personal piece that delves specifically into Blaser’s own poetry, and Fawcett’s “Robin And Me: The New American Poetry and Us,” writing Blaser in the context of “the New American Poetry” and the failures of such, provide unique counterpoints to Blaser’s place in the world, and the two authors as well. What comes across best (the two essays sandwiching a series of black and white photos of Blaser over the years, which are quite lovely) is the level at which Blaser demanded, by example, that those who paid any attention to him become thoroughly engaged with multiple facets of the world, questioning whatever came across their path, and Persky and Fawcett, in different ways through their works, have certainly done that. With the Jack Spicer biography already in print, and the perpetually-forthcoming Robert Duncan biography by Lisa Jarnot, Robin Blaser reads as an intriguing opening into, perhaps, the most modest yet most accomplished of the three, and one can only hope that Blaser’s own work can achieve further consideration. Will there be a biography, eventually, here as well?
Unfortunately, this lovely little folio, for reasons that haven’t been explained to me, is something that the Chapters chain of bookstores is refusing to carry, despite the range of awards and accolades between the authors and subject (Blaser won a special Griffin Poetry Prize not long before he won for his reissued The Holy Forest, and Persky won a Lietenant-Governor’s Medal from British Columbia and the Governor-Generals’ Award, for example). If this can’t get through the membrane of books that those-that-hold-power tell us we should read, what chance have the rest of us?
But still, how interesting is it that these two, who learned how to question the world, be interested in everything and explore critically through Blaser’s influence, both started with writing and publishing poetry but neither publish such anymore (Fawcett claims to still compose, but not send out unless asked, and even then)? Brian Fawcett starts his piece with talking about walking into his first class during the first year of Simon Fraser University in 1966, which also happened to be Blaser’s first class as well:

The Writer was Robin Blaser, and there was something about him that convinced me, even though the very idea was preposterous, that he really had met Jack Kerouac. He was also, it turned out, on a first-name basis with nearly all the contemporary poets I’d been reading since I was sixteen or seventeen, the most important of these being Allen Ginsberg, John Wieners, and Gary Snyder. All were part of a movement called the New American Poetry, a group of poets assembled and categorized by Donald Allen’s 1960 Grove Press anthology of the same name. I was carrying a much-pored-over copy of that anthology when I arrived at Simon Fraser, and it is hard to describe the intensity of my excitement when I found Blaser’s name in its table of contents along with those of my heroes.