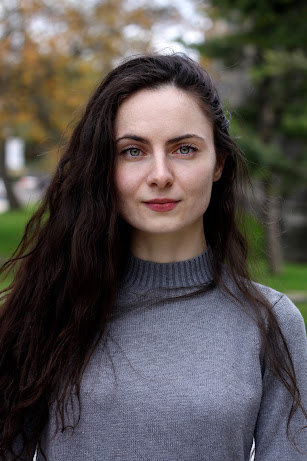 Anna van Valkenburg was born in Konin, Poland, and currently lives in Mississauga, Canada. Her poetry and reviews have been featured in The Puritan, Prism International, December magazine, The Rusty Toque, and elsewhere. Her work has been shortlisted for the Pangolin Poetry Prize and nominated for the AWP Intro Journals Project. Anna is the associate publisher at Guernica Editions. Queen and Carcass (Anvil Press, A Feed Dog Book) is her debut poetry collection.

1 - How did your first book change your life? How does your most recent work compare to your previous? How does it feel different?
Honestly, I don’t think it did. It’s an immense satisfaction to let a book out into the world in search of readers. But it’s not life changing. Perhaps it gifted me with a sense of validation, but even that’s a stretch— the truth is, writers get so used to rejection that waiting around for a book deal to feel validated is unrealistic. I was writing before the book was published. I’m still writing. In flurries, sometimes, between hiatuses. Writing isn’t always in the forefront, but it’s always there.

Queen and Carcass is my debut so I have no comparison to other books, though when it comes to poems, my work went through a few waves. When I started writing, my poems were often playful and whimsical. Then they shifted to very sparse, almost too severe. I wanted to make sure each word was deliberate, but sometimes that came at a cost of spontaneity. I think I eventually found a middle ground and rediscovered music in poetry without sacrificing terseness. (For now, at least— I think writing is always evolving, the next wave always coming in.)

2 - How did you come to poetry first, as opposed to, say, fiction or non-fiction?
It was completely administrative! I decided to apply to MFA programs last minute and the deadlines were coming up. I had to put together a portfolio and figured it would take less time to write poetry than to write prose (ha!). I became a poet thanks to early deadlines. But I kept with poetry because I love its sparseness— it’s a form in which what you don’t say is as important as what you do say. Absence speaks, it’s mystical— a fairytale in itself.

3 - How long does it take to start any particular writing project? Does your writing initially come quickly, or is it a slow process? Do first drafts appear looking close to their final shape, or does your work come out of copious notes?
It takes me very long to start something that I’m planning to start. When it comes to work that’s more spontaneous, naturally the start is quick. Some of my best poems have come out looking pretty much like the final version. Some I’ve had to labour over. When I read my work, I think about the process, so often the poems that gave me the hardest time feel the least finished to me even when in reality they’re polished. A sort of pentimento effect!

4 - Where does a poem usually begin for you? Are you an author of short pieces that end up combining into a larger project, or are you working on a "book" from the very beginning?
Usually with the concrete. An object or a person. Sometimes a colour, a feeling. By instinct I’m an unduly concise writer. I think a lot of writers tend to write a lot then cut down. I usually need to pad what I write.

Queen and Carcass was a compilation of individual poems. I had gathered (a lot) of material over a few years, and eventually sat down to see if and how the poems fit together. It turned out they did, and in fact there were already many connecting threads and themes. Though of course there was a lot to be done in order to really pull the poems into a book. But I don’t start writing with the idea of a book. With poetry I think we have this convenience. My process right now is similar— I’m not working on a second book, but on individual poems. I’ve found it to be “healthier” for the poems. When I’m focusing on the poem, I’m seeing where it takes me instead of trying to fit it into a larger scheme.

5 - Are public readings part of or counter to your creative process? Are you the sort of writer who enjoys doing readings?
Counter, counter! Instinctively… but I do see the value of them, and love that energy after a reading that’s conducive to creating.

6 - Do you have any theoretical concerns behind your writing? What kinds of questions are you trying to answer with your work? What do you even think the current questions are?
The question of “what does it mean to be human” is one that has been preoccupying me.

I think most theoretical concerns in literature boil down to this. What makes us human? What makes human life worthwhile? Regardless of the actual topic of the poem, short story, novel, and regardless of how you approach it. Wislawa Szymborska’s “Cat in an Empty Apartment” comes to mind as a good example of this. Szymborska spends the majority of the poem describing how an apartment changes to a cat after the death of its owner. But the point of the poem isn’t to decipher the cat’s feelings or actions. What we’re actually getting at is a speaker who wants to quantify death, to make sense of it. In all literature— we’re trying to make sense of what we are and what we’re supposed to be doing here. I don’t think the questions change over time, only the circumstances.

7 – What do you see the current role of the writer being in larger culture? Does s/he even have one? What do you think the role of the writer should be?
To observe and interpret; to look for truth, even when the truth is not clear… particularly when it’s not clear (including to the author him/herself); to try to expose that truth, however grey and muddled, through their writing. In this sense, the writer has a responsibility to society (pointing at Whitman here). But anything outside of this is extra. Simply: I don’t think it’s the writer’s role to (aim to) have a role.

8 - Do you find the process of working with an outside editor difficult or essential (or both)?
So far, I’ve found it simply essential, and enjoyable. But my editor (Stuart Ross) has been accommodating and very understanding. So I think this largely depends on the editor. For the most part, I think an editor is indispensable, even a seasoned author has a restricted view of their own work. Of course there are those instances where an editor (or publisher) will have a very precise idea of what they want to see. This leaves no space for the author to discover. I think that’s where the difficulty comes in.

9 - What is the best piece of advice you've heard (not necessarily given to you directly)?
In writing: act as if everyone is enlightened but you (Sandra Alcosser).

In general: “Dlatego dwie uszy jeden język dano, iżby mniej mówiono a więcej słuchano.” It”s a common Polish saying, loosely translated: “you got two ears and one mouth to speak less and listen more”. In fact, come to think of it, this applies perfectly to writing too.

10 - How easy has it been for you to move between genres (poetry to critical prose)? What do you see as the appeal?
Poetry and critical prose are completely different, they come from a different headspace. Sitting down to write poetry is a lot of chasing rabbits, looking for holes in the brain, prodding those holes, turning around, walking in circles. Sitting down to write critical work is rolling up your sleeves and moving forward.

11 - What kind of writing routine do you tend to keep, or do you even have one? How does a typical day (for you) begin?
I have two small children so any writing routine has gone out the window to play with the birds! I like to write in the morning— that doesn’t often happen now. A typical day begins with making breakfast for my daughters. Getting them dressed. Then coffee. Then my baby’s nap. I’m fitting in writing where I can, whenever I can.

12 - When your writing gets stalled, where do you turn or return for (for lack of a better word) inspiration?
My writing always (usually) comes from reading. I always (often) start a writing day by reading, and sometimes (often) write while reading. If I can’t write, I read, and the writing comes back.

14 - David W. McFadden once said that books come from books, but are there any other forms that influence your work, whether nature, music, science or visual art?
No, not consistently. Queen and Carcass was framed around Dvořák's Rusalka, an opera. Every once in a while a poem comes from a piece of visual art, but this is no different than a poem coming from a different visual for me. I don’t have an ear for music, though I respect it immensely. For me, words come from words.

15 - What other writers or writings are important for your work, or simply your life outside of your work?
I say this a lot, but I read a lot of work in translation. Queen and Carcass was written while reading a mix of Slavic poets, folktales, fairytales. I love folklore, it shows the roots and mentality of a culture.

At a certain point, the Modernists were very influential to me. I enjoy Slavic literature. Middle Eastern literature. Of course these are all boxes, constructions, not always clear— for example, Adam Zagajewski spent so much of his time in the United States. Faraj Bayrakdar lives in Sweden. But it’s the mentality that I’m getting at, the concerns addressed in a specific work. As an aside, or perhaps directly related, what has been most informative to me as a writer is reading work outside of my own experience and circumstances.

16 - What would you like to do that you haven't yet done?
In writing? I’d like to write a novel.

17 - If you could pick any other occupation to attempt, what would it be? Or, alternately, what do you think you would have ended up doing had you not been a writer?
If I hadn’t become a writer, I would have tried to become a professional cook. I think both are equally underpaid with long hours…

Last great film: Cold War (disclaimer: it’s been a few years since I watched a movie).

20 - What are you currently working on?
Poems, poems. Brainstorming a novel. Individual translations. Just plodding, plodding on…!