The sea-squids of the congresses
swim among the flooded people;
a star urinates over Cupcake mountain;
cloud livers drip on the gardens.

We take it as a sign, pixelated –
we, a short fever in space
combining
ones and the empty sign for nothing. (“Sat Down and Wept By Lake and Cloud Gear”) 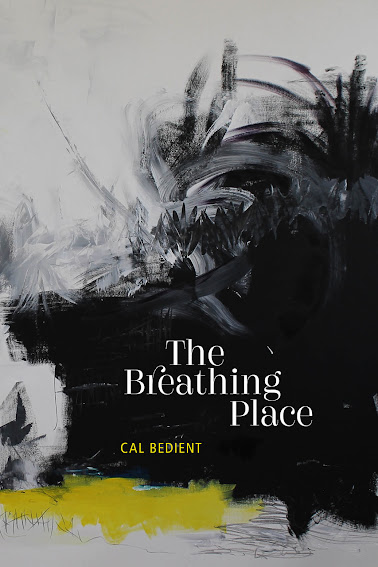 From California poet, critic and editor Cal Bedient comes The Breathing Place (Oakland CA: Omnidawn, 2021), following Candy Necklace (Wesleyan University Press, 1997), The Violence of the Morning (University of Georgia Press, 2002), Days of Unwilling (Saturnalia Books, 2008) and The Multiple (Omnidawn, 2012). There is something curious in the way his narrative lyrics write their expansivenesses from a foundation of poets such as Emily Dickinson, William Blake and Herman Melville, whether the long line or the sharpened space. As he writes to open the poem “What Was to Be an Elegy for Emily Dickinson”: “Why should there be red shoes if the earth was never born, / it was never born and these are its red shoes, / these the cerise Atlantic clouds to be taken with no comedy / remainder, why should there be a suchness of the day, // when a lightning suspender is no union.” In a curious combination of response and translation, his poems each establish a particular and expansive field, and write from within such in slightly different ways, whether filling up that space, or establishing the space through writing around particular absences. As he writes to open his “NOTES” at the end of the collection: “Now and again, this collection echoes (adopts, adapts) material from William Blake, César Vallejo, Tomaz Salamun, Fredericke Mayröcker.” “If breath were a sort of gigantic torso / will all possible earths in it,” he writes, to open the poem “Breathless,” “all Hatchling / molecules; If it could be jacked into the music / of Many Fountains starting up Together [.]”

Constructed in three sections—“Limits of the Containing Air,” “The Era” and “Green Water”—the poems in The Breathing Place display both an alertness and a fierce intelligence, offering both deep inquiry and descriptive strength, swirling simultaneously lyrically surreal and direct language into a series of sharp, stunning observations. “I liked my cheek,” he writes, to close “Ferns, Fingers, Gorges,” “against his baby. I put my tongue on Time, / I cry and crouch in her blindswarm, / my vaulting lady.” Or, as he writes to close the short sequence “Self-Portrait as Absence of Days,” composed “In Memory of ‘Annah Sobelman” (a poet I am sad to discover died in 2017 [see my review of her 2012 poetry title here]):

Comes the moment when, Flashlight dead,
You cannot go farther into the abandoned mine,
You cannot return:

There was no cry of “fire in the hole.”
But there is always fire in the Hole.