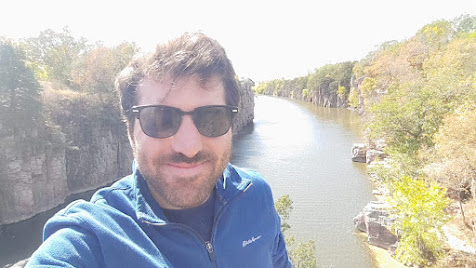 Shawn Rubenfeld has had short fiction appear in journals such as Permafrost, Columbia Journal and Portland Review. He has a Ph.D. in English and Creative Writing from the University of Nebraska-Lincoln, where he is currently a lecturer. He is the author of the novel, The Eggplant Curse and the Warp Zone, out May 2021 from 7.13 Books. He lives in Omaha.

1 - How did your first book change your life? How does your most recent work compare to your previous? How does it feel different?
Luckily it didn’t. My life hasn’t changed, and I like it that way. In fact, I’d much prefer that my work changes someone else’s life--that someone, somewhere can connect with it in some impactful way.

2 - How did you come to fiction first, as opposed to, say, poetry or non-fiction?
I actually didn’t! As a kid, I was primarily drawn to poetry. I carried a notebook around school with me which I’d fill in with poems whenever I was supposed to be taking notes (I had a science teacher once tell me you take such good notes when really I had spent the entire year working on my poems ). Back then I wrote fiction, too, but it wasn’t until I was an undergrad that fiction became my primary focus. That was because of a generous professor of mine, Heinz Insu Fenkl, who I worked with as part of an Independent Study. I walked into his office at the beginning of my sophomore year and told him I wanted to write a novel. He asked for a sample of my work so I gave him a story I wrote for a recent workshop. He told me he was impressed by it but that I shouldn’t write a novel. At least not yet. I needed to read first, to start small. So, we spent the entire semester talking craft, reading work by Toni Morrison and Madison Smartt Bell. I walked away with two new stories--one of which would eventually make up part of my MFA applications--and an understanding of intellectual generosity that I try to carry with me throughout my own academic life.

3 - How long does it take to start any particular writing project? Does your writing initially come quickly, or is it a slow process? Do first drafts appear looking close to their final shape, or does your work come out of copious notes?
It’s so hard to pinpoint because each project looks different. I’ve struggled slowly with some stories but really cooked through others. I would say that first drafts, at the very least, always resemble the finished product, even if just in tone. Revision is such an important part of my writing process, which is why I so frequently emphasize it when I teach.

4 - Where does a poem or work of prose usually begin for you? Are you an author of short pieces that end up combining into a larger project, or are you working on a "book" from the very beginning?
If it’s a novel then I know I’m working on it from the very beginning. Maybe it’s because one has to occupy a certain mental space before committing to a novel.  But as soon as I get started, I know if it’s a novel or not. But story collections are “larger projects” as well. Often my stories align thematically with my other stories but I don’t realize quite how connected they are until I’m done writing. So in that case, I may not be working on a “book from the very beginning” at all, but rather short pieces that do end up combining into larger projects.

5 - Are public readings part of or counter to your creative process? Are you the sort of writer who enjoys doing readings?
Definitely part of. It’s so rewarding to hear something being reacted to in real time, to see if jokes land, if people are digging it. I really feed off that energy.

6 - Do you have any theoretical concerns behind your writing? What kinds of questions are you trying to answer with your work? What do you even think the current questions are?
Of course. It varies so much based on the project. For this particular novel, The Eggplant Curse and the Warp Zone, I was initially interrogating fandom and communities, millennial angst, and the conflicts and implications of regional identity. But a lot of my current work, especially my short fiction, examines intergenerational Holocaust memory.

7 – What do you see the current role of the writer being in larger culture? Does s/he even have one? What do you think the role of the writer should be?
Writers have always had a great responsibility and that is even more true now. The writer documents. The writer brings the world to the reader. By simply holding a mirror up to society, writers can help readers understand, which is also why it’s important we amplify voices from marginalized communities, which also happens to be where some of the best work today is being written. Of course writing can be fun and be purely for entertainment and there’s absolutely nothing wrong with work like that, but writing can also do so much more. Writing can bring about change.

8 - Do you find the process of working with an outside editor difficult or essential (or both)?
Essential. The critical, objective eye a good editor brings is everything.

9 - What is the best piece of advice you've heard (not necessarily given to you directly)?
As I was working on my dissertation, my adviser often shared variations of Nike’s Just Do It. As in, just get it written. Just get it done. Just do the work. Sometimes it’s exactly what a writer needs to hear. Enough talking about it, just do it.

10 - How easy has it been for you to move between genres (poetry to short stories to the novel to critical prose)? What do you see as the appeal?
While I don’t think that moving between genres is easy, I do think that a good fiction writer has a lot to gain from writing poetry, from thinking about the integrity of the word, the line, and vice versa. It can really change your work.

11 - What kind of writing routine do you tend to keep, or do you even have one? How does a typical day (for you) begin?
I do most of my writing in the morning, at my desk, with a view of the sun from my office window. Other than that, there isn’t a typical day for me.

12 - When your writing gets stalled, where do you turn or return for (for lack of a better word) inspiration?
I like to remind myself that writer’s block is a myth. If you write yourself into a wall, you can write yourself out of it. But sometimes you’re out of juice for the day and when that happens, I go for a walk, I take a drive, I put a show on. I do something else. Often I’ll enter revision mode and read over what I already have written (this also serves as a gentle reminder to use my inventory when I need help moving forward), but sometimes the writing is done for the day and that’s okay too.

13 - What fragrance reminds you of home?
Salt. Seaweed. Sunscreen. The Atlantic meeting the south shore of Long Island.

14 - David W. McFadden once said that books come from books, but are there any other forms that influence your work, whether nature, music, science or visual art?
I’m very influenced by music. The right song helps to put me in the right headspace. But I also take influence from film, travel, and art. My debut novel, of course, was influenced by retro video games and is filled with references (some overt and some implicit) that reflects that.

15 - What other writers or writings are important for your work, or simply your life outside of your work?
Too many to list here. I would argue that almost every book I’ve read has influenced my work in some way, even if that influence was minor.

16 - What would you like to do that you haven't yet done?
I like to travel, so I’d love to visit every country. I have a long way to go, but I also have a lot of life left to live.

17 - If you could pick any other occupation to attempt, what would it be? Or, alternately, what do you think you would have ended up doing had you not been a writer?
I come from a family of accountants (literally: father, both brothers, uncles, cousins), so dare I say it...

18 - What made you write, as opposed to doing something else?
See answer to previous question. But also, I wanted to engage with people. To explore. It wasn’t that I felt like I had something to say. It was just that I needed to write. I read books so often as a kid that writing was something I started to do without a second thought. I know that even if I step away from it for a bit, the pull of the work will draw me back.

20 - What are you currently working on?
I just put the finishing touches on my story collection, which is very exciting and I’m getting started on a second novel, which is tonally and thematically different from The Eggplant Curse and the Warp Zone. Speaking of, I’ll end this with a shameless plug: The Eggplant Curse and the Warp Zone is out now. Give is a shot. Support authors. Support indie presses.