We’re not talking about Asians; we’re talking about China
It is smart business to name a restaurant chain after a cuddly bear
Who happens to be a vegetarian, but it is another thing
To go big-game hunting in the African savanna
I would just as soon turn a panda into a huggy coat or hat.
Importing kudu horns or making a zebra into a rug—
This is real and different. For one thing, it’s permanent,
Not just a bowl of green weeds and brown meat scrape
Gobbled, wolved, or slurped up or jammed down with sticks
Standing beside a dead giraffe that you shot on a hot day
Proves something about the depth of your character
I respect a man or woman that displays big-game trophies
We had Teddy Roosevelt, his Big Stick policy and Rough Riders
What does China have: old men with canes and fallen zippers 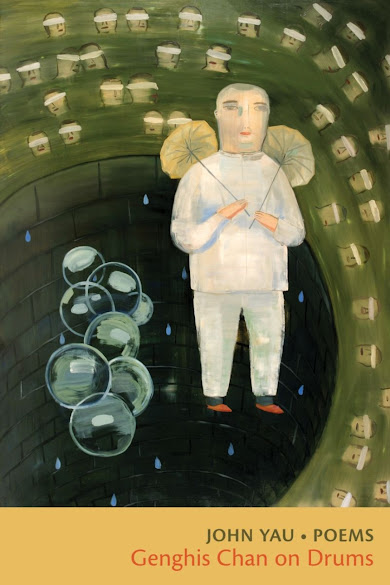 It is impossible not to delight in the near two hundred pages of American poet John Yau’s latest, Genghis Chan on Drums (Oakland CA: Omnidawn, 2021), a book that follows nearly a dozen poetry collections across more than forty years, as well as numerous chapbooks, works of fiction, criticism, collaborations and monographs. This is the first of his titles I’ve gone through, and I’m immediately struck by the clarity of the direct statements in his poems, especially the ways in which Yau returns years’ worth of racist comments, microaggressions and injustices back in the most powerful ways possible. The poem “On Being Told that I Don’t Look and Act Chinese,” opens: “I am deeply grateful for your good opinion / I am honestly indignant / I am, I confess, a little discouraged / I am inclined to agree with you / I am incredulous / I am in a chastened mood / I am far more grieved than I can tell you / I am naturally overjoyed [.]” There is a confidence and a strength here, one he knows when and how to play, push or hold back, from a poet who clearly knows exactly what it is he’s doing, and what tools he’s working with.

Structured via nine sections of poems, plus a prose poem in prologue, and two poems in epilogue, Yau appears to be engaged in multiple conversations, including a section of poems in which he responds to the previous administration, including the former American President, responding to history and culture as it occurs. “There are no words to express / the horrible hour that happened,” he writes, to open “The President’s Third Telegram,” “Journalists, like all fear, should be / attacked while doing their jobs [.]” Weaving in elements of culture and current events, much of which touch upon larger issues of fearmongering and racist dog-whistles, Yau’s is a very human and considered lyric sense of fairness and justice, composing poems that push back against dangerous rhetoric, outdated or deliberately obscured language and racist ideas and ideologies. In his own way, Yau works to counter the ways in which language is weaponized against marginalized groups, attempting to renew human consideration by showcasing how inhuman and destructive language has become. “We regret that we are unable to correct the matter of your disappointment,” he writes, as part of “Choose Two of the Following,” “We quaff mugs of delight while recounting the details of your latest inconvenience [.]”

Structurally, Yau appears to favour the extended suite: individual self-contained poems each sharing a title, although numbered in sequence, from the nineteen numbered “O Pin Yin Sonnet” poems, the eight “The Philosopher” poems to five “A Painter’s Thoughts,” each grouped together at different points in the collection. Given his lengthy publishing history, it would make sense that there are elements of this collection that extend further what he’s worked through previously, and there are points at which poems included here very much do feel an extension of a conversation I might not have encountered at the beginning. The most obvious suggestions of Yau working an ongoing series of conversations being, of course, how the nineteen “O Pin Yin Sonnets” begin their numbering at “10,” or how poet Monica Youn infers in her back cover blurb that the character/”alter-ego” Genghis Chan is one that Yau has utilized previously. Throughout, Yau engages in multiple and ongoing conversations, it would seem, from culture to politics to other writers, such as the first of the paired epilogue poems, “Nursery Song,” subtitled “(After Sean Bonney),” paying tribute to both the late British poet and activist, as well as engaging with some of Bonney’s own ongoing concerns. As the poem begins:

Don’t say “assortment of pretty much everything you can imagine,
at a loss for words, beyond your wildest dreams”
Don’t say “quartz countertops, home theater, private cul-de-sac, second getaway”
Say Fuck the rich, their carbon footprint, their dinosaur ways