It is occurring to me even as I am writing this now that this is not an experiment, or case study or collaboration or partnership. Damon is not the subject nor am I. This is a shared endeavor, an experience lived between two very different lives trying to understand what it means to be, to see the other. There is a word inside this book that neither of us can seem to hold, examine, write about with real honesty. And yet this feels like an endeavor of love. There. I just said it. I am saying this to you Damon. I am saying this to you reader. What are we trying to do if not to care for one another? To Protect, to understand, to share in the burden, to share in the comfort that is life. To see you in the hopes that you see me. In all our nakedness in our bodies and in our language. It has taken me a lifetime to write these words. It will take me a lifetime to finish this thought. 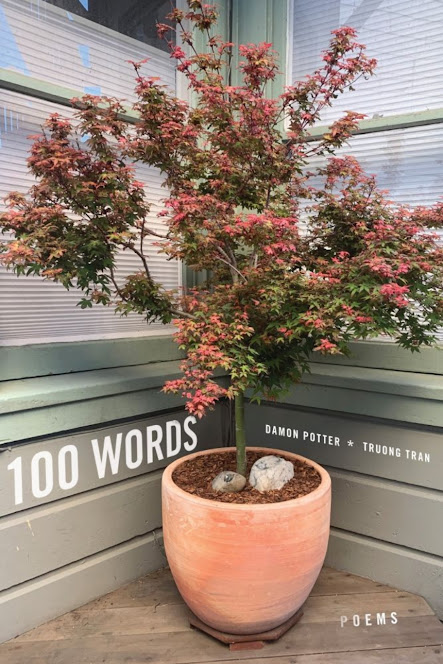 It has been a while since I’ve seen a poetry title by American-Vietnamese poet Truong Tran, so I was intrigued to see his collaboration with San Francisco poet Damon Potter, 100 Words: Poems (Oakland CA: Omnidawn, 2021). The poems that make up 100 Words: Poems are very much composed via a collaborative call-and-response, as they each respond to the prompt of an individual word, set as each poem’s title. As the book asks: how does one see the other? Composed through one hundred words-as-prompts, the project is reminiscent, somewhat, of Kingston writer Diane Schoemperlen’s debut novel, In the Language of Love (1994), a book composed in one hundred chapters, each chapter prompted by and titled “based on one of the one hundred words in the Standard Word Association Test, which was used to measure sanity.”

Composed as a process of vulnerability and exchange, there is something curious in Tran and Potter’s shared poems, uncertain as to which poet wrote which section, a process more open and interesting to read through than had each section been credited. The point, I suppose, was entirely to bleed into uncertainty, and a closeness of reading. In terms of potential authorship, some sections appear rather straightforward, and others, less so. As they write as part of “perhaps an afterword or a new beginning,” a sequence set at the end of the collection: “i am documenting a way of getting to you. it is a map to be shared in the / hopes that one day should that day come that you can use it as a way to / get to me.” There is something quite compelling in the depth of this conversation, into the bare bones of being, speaking on elements of race and privilege, belonging and othering, difference and sameness, either perceived or actual, and how perception itself shapes our lived reality. Opening an endless sequence of questions, there aren’t answers per se, but the way in which each writer responds, both to the prompt and to each other, that provides the strength of this collection. It is the place where these two writers meet, in the space of the poem, of the page, that resounds. As the second stanza/section of the poem “why” writes:

its the question i find myself asking of just about everything in life. why did that happen? why am i here? why are we doing this? why would it matter. that you would agree to do this with a stranger. why? amendment to the word that came before. i hope we are not stranger from this word forward.

self is ones body. self is the way one sees their own chest legs waist and or torso or internal self what we think of brains. self is how you see other people see you. receive information. self is a carriage rolling along its pulled by a horse it might be a pumpkin. self is too often a value thought thing and that feels wrong