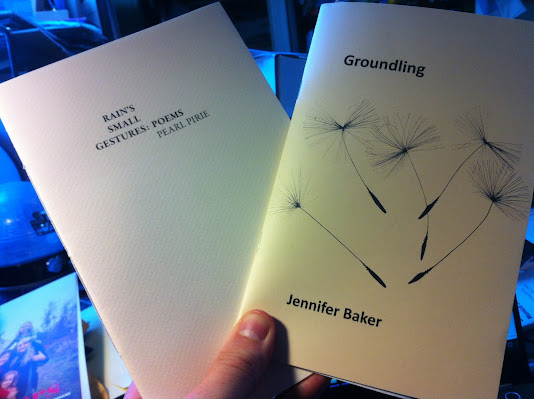 You can’t keep a good chapbook reviewer down, it would seem.

Don’t forget: 2022 subscriptions are available for above/ground press, yes? Can you believe the press turns twenty-nine next year? Gadzooks!

Ottawa ON: The latest from Pearl Pirie (formerly of Ottawa but now living in the wilds of Quebec, somewhere just across the river and provincial border) is RAIN’S SMALL GESTURES: POEMS (Ottawa ON: Apt. 9 Press, 2021), a small and graceful edition of eighty copies produced by Cameron Anstee’s Apt. 9 Press in September. Over the space of four full-length collections and “dozens of chapbooks,” Pirie has long been attentive to the small and condensed poem, in part through her engagement through Ottawa’s KaDo haiku poets. She has long been attentive to the shape and the scope of such small works, but this is one of the few times she’s put together a collection deliberately leaning into the gesture of the small moment. Or, as she writes as part of her notes at the back of the collection, citing a list of influences and inspirations “who model how to keep it small but meaningful.”

The poems here are short and sharp, requiring a measure of attention. Reread these, please.

Victoria BC/Ottawa ON: It is good to see a new chapbook of poems from Ottawa poet and critic Jennifer Baker, following her debut, Abject Lessons (above/ground press, 2014): her Groundling (Victoria BC: Trainwreck Press, 2021). Baker’s poems in Groundling utilize erasure and open/empty space a bit more than her work has prior, at least from what I’ve been aware. The poems here offer halt and hesitation, pause and the myriad possibilities of the unwritten/unspoken. “know that my gods are / patience      distance       & hunker down,” she writes, as part of the four-page accumulation, “imbibition.” In certain ways, Baker appears to sharpen poems out of cobbled-notes, erasures, accumulated fragments and salvaged correspondence, including three poems, according to her own notes at the back, produced as “erasure poems generated from apology letters, personally received or sent.” One of those is the sequence “how it ended,” which opens with a fractured lyric that, as the sections progress, erase down to smaller points, opening with:

And progressing, by the third section:

Given how she suggests this work a project of different iterations, I am hoping that this short collection of pieces might be but a teaser towards something further, down the road.