In the Bee Latitudes, ‘Annah Sobelman

and yes it was spreading our legs to
heart ‘ s desire , I was sure ,—
A year of one idea ,   toward spring –
A casual
insomnia .
But an  underbrush exploded . 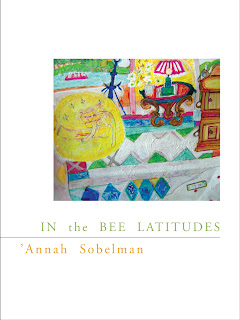 There is such a magnificent spacing in the poems of American poet ‘Annah Sobelman, in her second trade poetry collection, In the Bee Latitudes (Berkeley CA: University of California Press, 2012). Sobelman uses punctuation nearly as visual cues, altering a lexicon what of punctuation often is to what it could actually be. Who else would use two commas at the end of a line? Marvellous, really. It’s as though she is aware of punctuation in poetry as a medium unto itself, the space and the sparse and the parse of spacing. One only hopes she reads with the same breaks and spacings her texts display.

In her In the Bee Latitudes, Sobelman utilizes a series of insect-like smallnesses, incorporating sentence and word fragments nearly to the point of collage, reminiscent of Toronto poet a. rawlings’ Wide Slumber for Lepidopterists (Toronto ON: Coach House Books, 2006), or even Toronto poet/publisher Jay MillAr’s magnificent chapbook, Sporadic Growth:being a third season of 26 fungal threads (Vancouver BC: Nomados, 2006). One wonders, what do these fragments work to achieve in their accumulations? Sobelman composes an expansive exploration towards understanding bees, bats and other subjects that she manages to shift into lavish abstracts disguised as poem-essays. Or is it the other way around?


Thank you. I have been a great admirer of Annah's sunce she read from the tulip Sacrament in Taos, NM. Hers is a world of parts and particvales and the plains of he bdy. The map is not the territory" and she works with that, its promises and lies
the nody and its skin, and where is the balm of bees. Her poems confess that one never pays attention all the time, but those in between moments and margins are also waiting to show.. I love the wau she twirls and lashes and releases the connections between science and poetry.

I thank you, particularly as when you put these poems on line I could enlatrge them and read. I am so close to the vanishing letter with eye disease. More, please. Nancy Ryan, Taos, N.M.