Culture of One, Alice Notley

The most outstanding characteristic of the mercy moment, the time when she comes, is how instantly the suffering stops. You have to stop thinking. You don’t have time for guilt, or you will neither sleep nor begin again. This was how I started this time; then I asked myself what I would like to read, or rather what items I wanted in my culture, to contain created, newly and justly, my needs. The world isn’t a text to be deciphered, it is a new creation through ancient—but what is antiquity to me? Every moment must destroy suffering anew; a cloud enters you, to begin in. 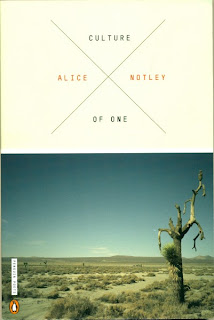 I’ve been a few years working my way through Alice Notley’s novelistic poetry collections, working through The Descent of Alette (1996) and Disobedience (2001) before entering into Grave of Light: New and Selected Poems 1970-2005 (2006) [see my note on such here], In the Pines (2007) and Reason and Other Women (2010) [see my review of such here], as well as her magnificent Coming After: Essays on Poetry (2005). How does one begin to write on such a writer, on such an ouvre? (New York poet Rachel Zucker did recently, brilliantly, here.) One of her more recent works is Culture of One (Penguin, 2011), a “work inspired by the life of Marie, a woman who resided in the dump outside Notley’s hometown in the southwestern desert of America. In this poetical fantasy, Marie becomes the ultimate artist/poet, composing a codex-calligraphy, writings, paintings, collage—from materials left at the dump. She is a ‘culture of one.’”

There is something odd about the description on the book’s back cover that doesn’t quite give the work enough credit. This is a collage-work, certainly, working out the story of Marie in the character’s own words, writing out the story of her life and her art in the stretch and breadth of a novel in the space of a poetry collection. “I invented the arts to stay alive,” the main character says, early on in the collection. Notley writes out the story of Marie, including commentary on American culture and the nature of arts and of art, and just what mercy, as well as the goddess Mercy, might mean.

I often wonder if I’m smart or clever enough to comprehend the range of what Notley is doing in her works, and so much of it moves at a speed beyond my comprehension. There is so much here it nearly overwhelms, staggering an amount of attention built upon attention. Listen, the book says: pay attention, slow down.

Mercy continues to brood. First, I was a concept …
No, I was a little girl. Who knows the difference?
Something starts to happen while she thinks; bigger,
the cloud enlarging, its purple-grey everywhere.
Because if I remain as concentrated as this pain
I feel I will snap. I’ve forgotten how I was able to be

merciful … It was as magical as suddenly being
alive. Now I must have mercy on myself …

larger and larger; purple lines swirl fingerprintlike,
then the pattern rips; everything’s touched by me—
I’m everywhere.
Do I still exist? Perhaps my nature has finally changed …
I am Mercy, but now I don’t care about anything,
and I’m too large for your forms of me: your silly statues.