Certainly there are more than four. Breton says fifteen or so. Arp says it’s winter every Monday. The Inuit say there are six, including those that contain the small material for winter and for spring. When you look at me as you do now, that is a season. That look contains the small material for joy, another season that comes and goes unpredictably throughout the year. I hope when I die it will be in a season of joy and that you will circle the date on a calendar as having been the longest day. 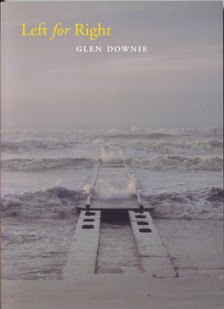 I’m intrigued by the new poetry collection by Toronto poet Glen Downie, his Left for Right (Toronto ON: Pedlar Press, 2012), a collection of prose poems blended in with the very short (or, “postcard”) story. It was wise to include the poem “Seasons” on the back cover, as it is one of the sharpest in this collection of short pieces, but for so many other poems, the sharpness isn’t quite there, in lines that require further tightness. Perhaps it’s a matter of style, and my own insistence in wanting most of these poems carved in half so the fingers might cut, on lines so tight you could bounce a quarter off. I wish for the difference between a good prose poem/short story and a prose that cuts down to the bone. Does all writing require blood?

Among powers and principles, we are less than Luxembourg or Lichtenstein. Our privy council meets in the privy; our cabinet in a cabinet. And she is the infant monarch of this, the smallest country in the world. She rules with the tiniest iron fist; her every utterance, a royal decree.
It’s her father’s role to carry her throughout the realm to receive the adoration of her subjects, and indeed, she is revered wherever she goes, especially for her courage during the recent hostilities. Our constitution is still unwritten, and it’s not clear what it may mean to the State when her aging porter can no longer carry her. We have never had a queen before, and will never have another – so belovéd is she, we cannot conceive of succession.

Some of these, such as “Seasons” are alone worth having gone through the entire collection, but so many others are good, and only that. Am I simply demanding something out of these pieces other than what he is offering? The best of these are quite spectacular, yet others fall half-flat. Still, it would seem as though Downie is capable of great things, and there are pieces in this collection that would make you believe it. You just have to find them.
Posted by rob mclennan at 9:01 AM
Labels: Glen Downie, Pedlar Press