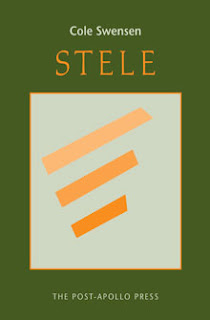 In the poem-sequence Stele (Sausalito CA: The Post-Apollo Press, 2012), American poet Cole Swensen has composed a book far different than many of her poetry collections of the past few years. For the record, her poetry collections to date include: It’s Alive She Says (Floating Island Press, 1984), New Math (William Morrow & Co., 1988), Park (Floating Island Press, 1991), Numen (Burning Deck Press, 1995), Noon (Sun & Moon Press, 1997), Try (University of Iowa Press, 1999), Oh (Apogee Press, 2000), Such Rich Hour (University of Iowa Press, 2001), Goest (Alice James Books, 2004), The Book of a Hundred Hands (University of Iowa Press, 2005), The Glass Age (Alice James Books, 2007), Ours: poems on the gardens of Andre Le Notre (University of California Press, 2008), greensward (Ugly Duckling Presse, 2010) and Gravesend (University of California Press, 2012). [I've reviewed a number of these over the years. Click on Cole Swensen's name underneath to see previous posts] At least her past half dozen poetry titles have each been composed across the canvas of a particular idea or theme, with individual poems existing as fragments of a larger whole, articulating a poem-as-essay. Instead, Stele composes an ongoing sentence, a lyric binary of small repetitions in a suite of three. A suite of three, with nine pieces in the first section, ten in the second, and eleven in the third, and final, section. As the back cover quote by Norma Cole writes, “two eerily different musical scores.” Not that this is her first suite; the musical tone of Stele is reminiscent of her opera-laden Oh. Much like Oh, this is a far shorter suite than many of her book-length titles. With but forty pages of text, the first poem of this graceful and enviable little book sets the tone of the collection as a whole, a particular kind of doubling effect, in which one can read the poem as broken lines, or two poems in parallel. The effect is breathtaking.

Posted by rob mclennan at 9:01 AM
Labels: Cole Swensen, The Post-Apollo Press