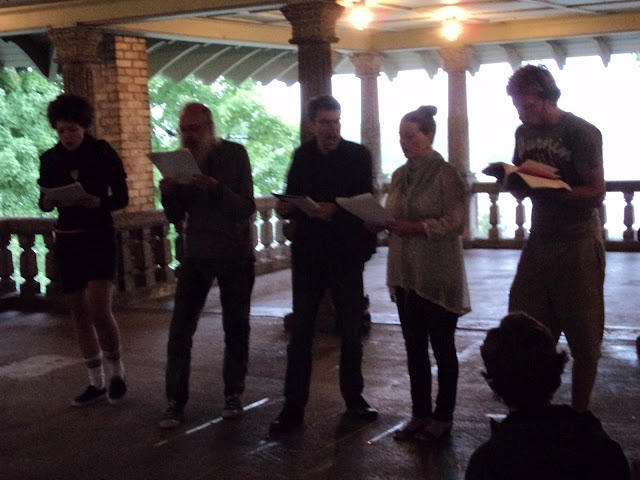 On Saturday, August 10, 2012, Ottawa poet, performer and publisher jwcurry held the tenth edition of his ongoing Messagio Galore performances at the Rockcliffe Park Pavilion in Rockcliffe Park, featuring a variety of “sound poetry & similaria” performed by himself, Rachel Lindsey, Sheena Mordasiewiez, Brian Pirie and Zachary Robert, with additional fill-ins by former Messagio regular Alistair Larwill. I’m pretty sure that I’ve now witnessed all but three of his Messagio performances (the third was in Calgary [see a photo from such here] and the previous was held in Toronto [see an event report by John Barlow here]), and he has utilized a variety of voices over the years, including Christine McNair, Grant Wilkins, Sandra Ridley, Peter Norman, Lesley Marshall, Nicholas Power, Rob Read, Roland Prevost, John Lavery, ross priddle, Laurie Fuhr, Maria Erskine, Max Middle and Carmel Purkis. This current group was formed after the performance of Messagio Galore VIII on May 1, 2011 [see my report on such here], as performers Grant Wilkins, Christine McNair [see her own Messagio Galore VIII pre-event report here] and Sandra Ridley moved on to be replaced by [seePearl Pirie’s pre-event note on such here] Rachel Lindsey, Brian Pirie and Zachary Robert for the performance of Messagio Galore IX in Toronto on May 6, 2012, an event, unfortunately, Lindsay was unable to attend. 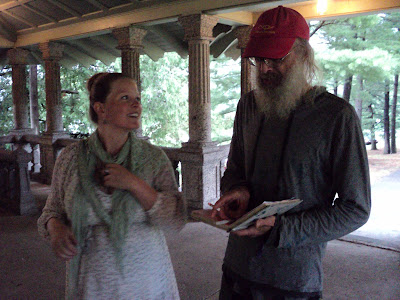 [Rachel Lindsey and jwcurry] For those of us in Ottawa, unable to make that event as well, this was the introduction of nearly an entirely new group of voices (Messagios VII and VIII had a great deal of overlap in performers [see my reports on Messagios II, VI and VII also, as well as Shanger's report on IV]), performing with the most beautiful backdrop of the Ottawa River and the Gatineau Hills in fading twilight. As the group arranged themselves for set-up, “bubble machine” (as curry called her) Pearl Pirie managed to discover and utilize an array of bubble dispensers (the space is used for a number of wedding ceremonies; we even arrived in the midst of a full-on wedding rehearsal before we were able to properly invade). An audience of some forty people spread about the Pavillion  included Pearl Pirie [see her flickr page from such], Roland Prevost and Janice Tokar, Christine McNair, Amanda and Charles Earl, Lauren Walker, Marilyn Irwin, Grant Wilkins, Michèle Provost and Monique Desnoyers, each of whom were asked to sign jwcurry’s register upon arrival. Filmmaker Ben Walker, a frequent jwcurry collaborator, was also on hand to record the entire performance.

Here is their set list, shortened (copies of the program, with copious liner notes by jwcurry, can be ordered through his Room 302 Books): 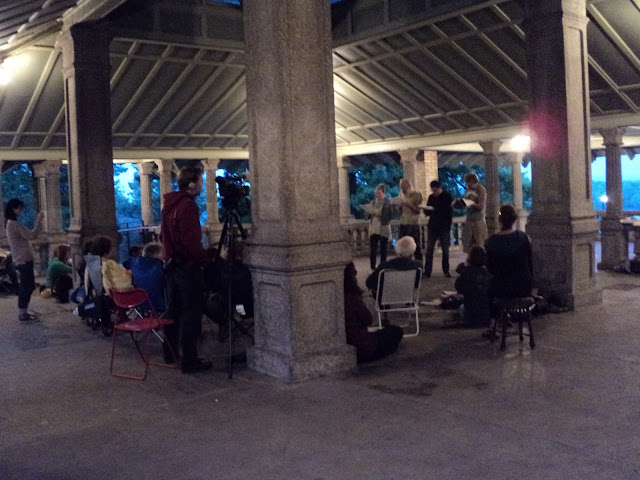 As much as jwcurry the conductor is incredible, it’s hard to not be also fascinated by jwcurry the arranger, and these performances really give the opportunity for audiences to really be aware of that part of his ongoing works. The liner notes include such gems as: (for #7) “gridtext deployed through extended breathlines, our version approaches the score much more literally than did the Horsemen’s more freewheeling phonetic romps.”; (for #8) “while Zappa’s lyrics are ordinarily accompanied by improvised electric jazzband meltdown boop-bop atonalities, we thought it worth a lampshade to simulate some verbal discontinuities for an alternate avenue toward parasepsis.”; and (for #13) “brought together by the 1st world war & separated by the 2nd, both friends independently came to write short works based on birdsound. this interlineated arranged by curry (2009?) is a step toward A Visit to the Aviary, a short suite on related material from various sources.” 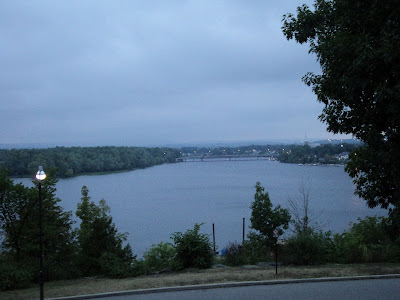 What makes the experience of the Messagios so compelling, apart from the obvious display of highly trained voices and performers doing sound works, is the high level of vocal harmonies, blending, layering, collisions and deliberate dischord throughout, such as the seventh piece in the set, and the closing piece, which has been performed now by a couple of Messagio groups. It’s as though jwcurry has fashioned a series of not only sound poetry performances, but choral poetry performances. One of the aspects of the Messagio Galores is the repetition of pieces from performance to performance, as though curry is trying to “get it right” or try out alternate arrangements or alternate performers and possibilities, seeing just what some of the same pieces can achieve. For those of us who have seen a number of the Messagios over the years, hearing different versions of some of the same pieces allows for a different level of enjoyment and comprehension. “The Dangerous Kitchen” has been part of jwcurry’s repertoire long enough that there are a number of people in Ottawa (including Christine McNair and Carmel Purkis) that can’t help but have the entirety of it memorized.

To be part of the group, it appears nearly a requirement to be willing to try just about anything, and curry has pushed more than a few over the years out of their comfort zones, and one of the highlights of the performance had to be hearing what Brian Pirie is capable of. Certainly, the extremely pregnant Rachel Lindsey was a wonderful discovery, a performer obviously comfortable and willing to be fearless (she also performs publicly asa singer), but equally impressive was how curry brought something out of Pirie’s voice that had been lingering, quietly, underneath. A year ago, I was able to hear Pirie perform with his lovely wife, the poet Pearl Pirie, during a featured set she was doing in Toronto as part of Avant-Garden which was quite intriguing. The two performed a piece composed for two voices.

There are currently plans in the works for more non-Ottawa performances, with rumours of an upcoming performance in St. Catharines, Ontario, which many of us in Ottawa are pleased to hear about, but frustrated in that we most likely can’t attend.