both the ferned & the furry, the herbaceous & the human, can call the ocean our ancestor. our blood plasma sings the composition of seawater. roughly half a billion years ago, ocean reshaped some of its currents into fungi, flora & fauna that left their marine homes & learned to exchange bodily fluids on land. spreading like succulents & stinging nettles, our salty-wet bodies refilled their fluids through an eating that is also always drinking. hypersea is a story of how we rearrange our oceanic selves on land. we are liquid matrix, streaming & recombining through ingestic one another, as a child swallows a juicy plum, as a beaver chews on tree, as a hare inhales a patch of moist, dewy clover. what do we return to the ocean that let us loose on land? we are animals moving extracted & excreted minerals into the ocean without plan or precaution, making dead zones though we are capable of life. (“BORROWED WATERS: THE SEA AROUND US, THE SEA WITHIN US”) 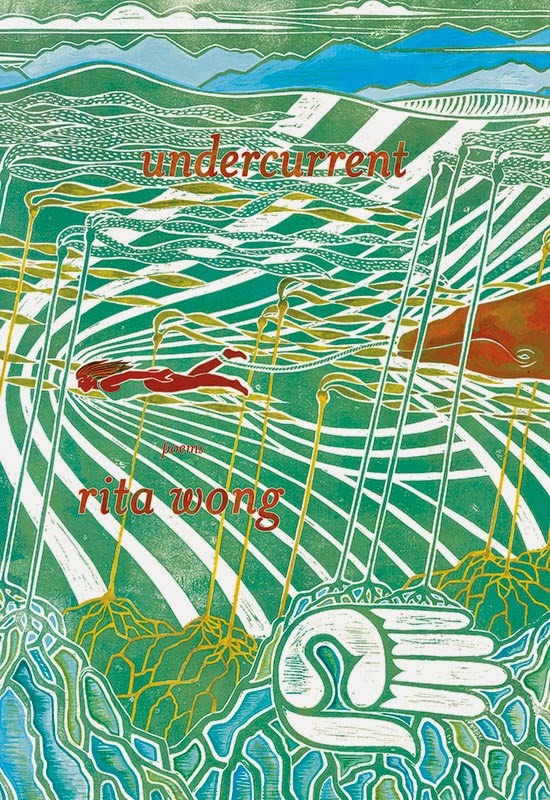 Vancouver poet Rita Wong’s fourth poetry collection, undercurrent (Gibson’s BC: Nightwood Editions, 2015)—following monkeypuzzle (Vancouver BC: Press Gang, 1998), forge (Nightwood Editions, 2007) and sybil unrest (with Larissa Lai; Vancouver BC: Line Books, 2008; New Star, 2013)—is, as Wang Ping informs on the back cover, a “love song for rivers, land, and sentient beings on earth.” Constructed out of lyric fragments, prose poems, memoir notes and extensive research, undercurrent is an extensive pastiche of the story of numerous bodies of water, and our relationships to them. Writing in, around and through the lyric flow, the poems exist, in part, as an extensive call to action against an increasing level of human carnage inflicted upon the earth and its inhabitants: “midway at midway, sun glares plastic trashed, beached, busted / bottle caps, broken lighters, brittle shreds in feathered corpses // heralded by the hula hoop & the frisbee, this funky plastic age / spins out unplanned aftermath, ongoing agony” (“MONGO MONDO”). Unlike a number of other British Columbia poets writing on the dangerous effects of capitalism, Wong’s undercurrent, much like Cecily Nicholson’s From the Poplars (Talonbooks, 2014), allows her subject matter to be the focus, existing not as victim but as robust character, describing a series of affronts, assaults and toxic tales, as well as positive stories on the beauty and power of the undercurrent. As she writes:

after eighty destructive years
industrial blockage of salmon habitat
we celebrate this uncanny return in the city:
salmon to Still Creek in 2012
alert, adept swimmers
kindle, perpetuate, astound
with sleek scaly stamina
miraculous as the salmon that grace Musqueam Creek
with each year’s turn around the sun
an unbroken vow between relatives

Composed as collage, this is the story of water.

In spring 2014, canoeing in the gentle River of Golden Dreams near Whistler, BC, I fell in when we snagged on a branch and suddenly tipped over. The shock of cold water awoke me into vigilance. Wearing a lifejacket did not eliminate the fear I felt as the river enveloped me completely, reminded me of its power.

Ironically, I cannot swim, though I have taken lessons over the years, and continue to try learning in an on-again, off-again way, as skin and health permit. Having addressed barriers to swimming in the city one by one – finding an ozone-purified pool instead of a chlorinated one, getting prescription goggles, practicing kicks, etc. I have improved but still find myself woefully clumsy and tense in the water, as it conducts so much sound and stimulus, thicker than air. How can someone write a book with and for water, and not swim? Very humbly and respectfully, I would say. It’s not so much that I fear the water, as I fear my own inability to manoeuvre in it, based in part on my reluctance to relax, the resistance to submit to the water’s own dynamics for more than a few breaths. This is partly what I mean when I say that I am still learning water’s syntax. I mean that in a much larger way too, though. One water body flows together with other water bodies, a whole greater than its parts. “What you cannot do alone, you will do together.”
Thanks to the river’s prompting, I will return to the swim lessons when the time and conditions are right. In the meantime, even for those who don’t swim, water rules! Our cities and lifestyles are built upon it, whether we know it or not. Try going a day, or three, without water. Water gives us life. What do we give back to water?