kevin mcpherson eckhoff, Their Biography: an organism of relationships

Although Kevin McPherson Eckhoff has been praised as “the onanism of the literary world,” there is much we are still decoding about his possible past of villainy. A man who is as complex as an algorhythm can only be understood and analyzed through close observations of semiotics (and the endeavor of shopping for attractive shirts of the spectacle variety). It would appear that his features evoke emotional, confessional lyrics that reveal the depths of a sensitive soul… or is this mere performativity? 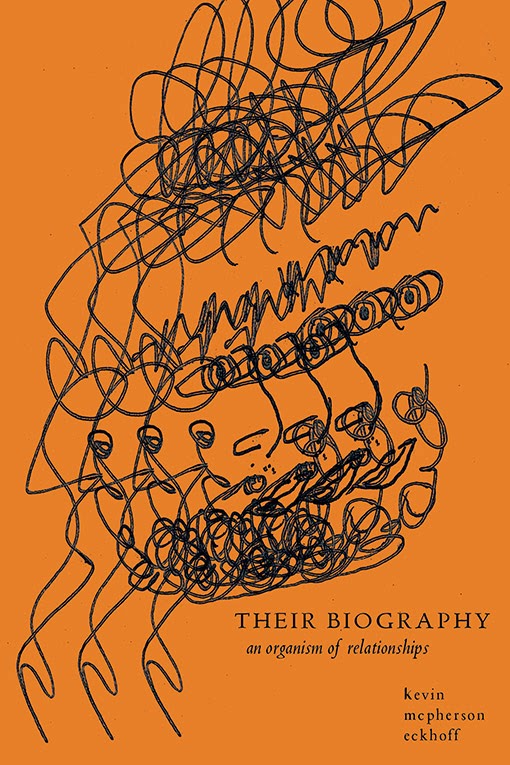 For his fourth book, British Columbia poet kevin mcpherson eckhoff’s Their Biography: an organism of relationships (Toronto ON: BookThug, 2015) is less a composition by the author than a selection of invited submissions on and around the author by a multitude of others. Deliberately twisting ideas around “identity or relationships or language,” the collage aspect of the collection writes “about” the author as a collaborative and deliberately contradictory “memoir.” What becomes interesting through the process of going through Their Biography: an organism of relationships is just how much the structure instead opens up a different kind of portrait: one created less out of facts than through, as the title suggests, a series of relationships. This portrait portrays a writer deeply engaged with writing, his community of friends, family and contemporaries, and the notion of “serious play,” one that a number of his “authors” reflect in their individual chapters. There is such a generosity present throughout sixty-two chapters of anecdote, illustration and pure fiction. At the end of the collection, as a “Table of Contents,” he includes a full list of “chapters” and their authors, including what appears to be family members included alongside well known Canadian poets such as Gregory Betts, Eric Zboya, Vickie Routhe Ness McPherson, Al Rempel, Amanda Earl, Laurel Eckhoff McPherson, Rob Budde, Jeremy Stewart, Jonathan Ball, Claire Donato and Marlene Martins McPherson, among others. Some pieces are incredibly playful, deliberately inventing facts around the fictional character “Kevin McPherson Echoff,” while others are a bit more straightforward, suggesting the use of a more literal narrative of facts. What becomes clear, and quite compelling, is the ways in which the portrait makes itself directly impossible through the collage, and reads akin to a biography of a character that, in the end, becomes entirely separate from the British Columbia poet. This is a highly entertaining and imaginative book, and after a while, it might no longer matter if this character is real, or has anything to do with the the author himself.