Like a lot of my stories, that one just followed one momentary thought—What am I doing here, putting odd sentences together and creating some little piece of nonsense, when people are dying on the other side of the world and our government’s going to damnation? It’s something that a lot of artists, I’m sure, feel at one time or another, that they’re wasting time or doing something frivolous. So instead of answering myself and ignoring it, I wrote it out as a little thought. I didn’t know how much value to give to that story, but I showed it to a very serious critic and she liked it, so I decided it passed.
Lydia Davis, The Art of Fiction No. 227, The Paris Review 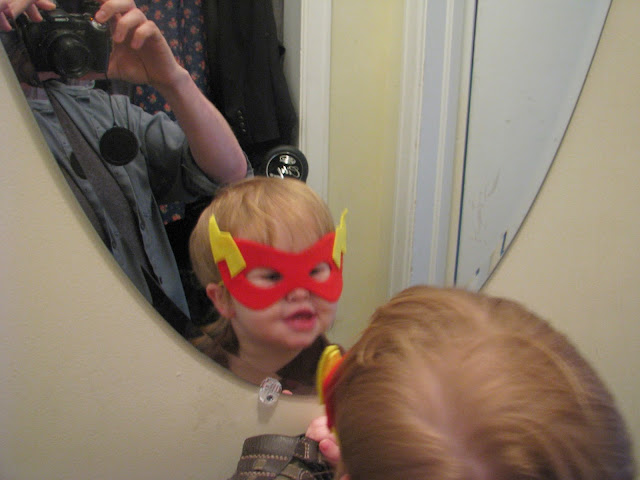 There’s been a ton of activity around here lately, or perhaps there hasn’t; perhaps my time full-time with toddler has shifted my perspective. Who knows? I bake, I wander with wee babe to the park, and the occasional reading even happens. Currently I’m in the midst of a slew of new above/ground press publications for the upcoming semi-annual ottawa small press book fair weekend, on June 12 and 13: might we see you there?

Rose turned eighteen months last week. Her big sister Kate gifted her a “Flash” mask, which means, of course, there can only be blurry photos.

Prince George BC: Rob Budde was good enough to send me a copy of Kara-lee MacDonald’s Eating Matters (Hobo Books, 2015), a chapbook of poems exploring eating disorders and the social pressures/expectations of women. The collage aspect of the collection, very much composed as a single project, is rather interesting. Some pieces might be less effective than others, but the variety and scope of the structure makes the read more than worth it. To see how one might get a copy, check with karaleemacdona@gmail.com

At the end of the way,
—theory fails
to account for disjunction
between bodily urges and
rational thought.

When the late hour and quiet house
have broken her resolve,
she responds predictably.

A trip to the kitchen before
inducing in the bathroom.
Running water to mask
the sounds.

Philadelphia PA: From Brian Teare’s Albion Books comes Jean Valentine’s small chapbook friend (2015), a collection of lyrics that appear to reference her prior poem for Adrienne Rich, a piece that shares a similar title. An award-winning New York City poet, Valentine is the author of numerous books, and winner of a wide array of awards, from the Wallace Stevens Award and the Shelley Memorial Prize. The short poems in friend are carefully composed and packed tight, while still allowing a particular looseness to breathe between her lines.

MY WORDS TO YOU

Perhaps extending from that previous piece, these poems explore the attachments between people. She writes of loss and love, and even deeper bonds, such as the final stanza of the poem “AFTER: ISN'T THERE SOMETHING,” that reads:

I want to go back to you,
who when you were dying said
“There are one or two people you don’t want to
let go of.” Here too, where I don’t let go of you.

Toronto ON: The recently-launched Toronto chapbook publisher, WORDS(ON)PAGES, released a small handful of chapbooks this past spring, including Daniel Scott Tysdal’s THE DISCOVERY OF LOVE (2015), “COMPOSED ON THE OCCASION OF THE PUBLICATION OF THE DISCOVERY OF LOVE, WHICH MARKED THE THIRTIETH ANNIVERSARY OF THE PASSING OF THE GAY MARRIAGE ACT ON JANUARY 18, 1979.”

The discovery? Yes, ma’am, I remember,
clear as day. I was searching the Good Book
for a verse that would really stick it to
the homosexuals. You see, that was how
I thought back in ’77. It was late, which
I don’t remember so much as know. I still
don’t sleep well when travelling, even
though that night I was in Dade Country, only
an eight hour drive from my own bed [laughs].
Dade’s where they were passing that law,
you see, to help the homosexuals. Or stop
hurting them. [Pauses] I don’t recall.
Either way, the lot of us Pastors and Deacons
were madder than mules chewing bees
[laughs], ready to bring down all the light
and fire of the Lord on those heathen
councilors in Miami. And then it
happened. [Pauses]. This I remember
as clear as day. I saw that word and I felt
God’s own great hands wrap me up like
a blanket round a baby and for the first
time I truly felt [pauses] Him, [pauses]
I mean us, us, the power He granted us
with this one word that changed the whole
ballgame: love. It was right there in John’s
First Epistle: “We love because He first loved
us.” I couldn’t believe we had missed it!
Lord forgive us, for centuries! [Laughs.]
And the scriptures were just stuffed with
it. Mark 12:31, “Love your neighbor as
yourself.” Romans 13:8: “Let no debt
remain outstanding, except the continuing
debt to love one another.” (“1. THE FORMER PASTOR MAYHEW RAY”)

Subtitled “EXCERPTS FROM AN ENDLESS ORAL HISTORY,” Tysdal’s five-part poem exists as both celebration and historical warning, utilizing real events for the sake of a lyric-through-accretion. Tysdal’s published poetry to date, which include a small handful of trade collections and small chapbooks, are each constructed in unexpected ways, utilizing collage, the idea of the archive and folded materials to produce highly inventive and incredibly powerful works that, in themselves, question the possibilities of what poetry could be. What is a poem? Tysdal’s work continues to challenge the idea of simply what is possible.