This is a poem for you for you
for spontaneous flight
Because we live underneath some helicopters.

And outside that muscle is fat and bone
and a car that carries the body elsewhere.

We love the drones.
We love that they all have heads and
arms to fight with. All their
arms are united. You were not
born in California but neither was I.
I am angling at the surface larger

than your actual face, a not
corporate body. This is a love poem
and I did not do any research. 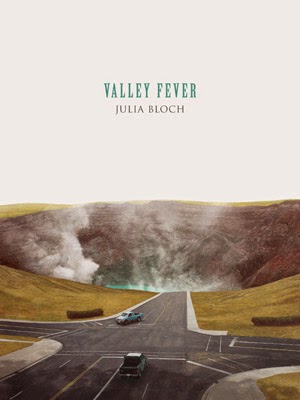 Philadelphia poet, critic and editor Julia Bloch’s eagerly-awaited second poetry collection is Valley Fever (Portland OR/San Francisco CA: Sidebrow Books, 2015), a book that appears three years after the publication of her Letters to Kelly Clarkson (Sidebrow Books, 2012). There is a precision to Bloch’s dense lyrics that is quite compelling, one that is constructed out of an accumulation of sharp sentences that accumulate, despite the appearance of narrative disjunction that exist between those sentences. As she writes to open the poem “FOURTH WALK”: “Don’t believe in writing as possession. Don’t / believe in bylines like slimming wear.” It is as though the sentences in her poems less leap from point-to-point than somehow float across and even through their own trajectory, seamlessly incorporating a wide array of ideas and fragments together into a single thread. As she writes to open “VISALIA”: “An allergy to / bone, this weather. / That’s how deep.”

Bloch’s short lyrics have an incredible compactness. To call her poems “quirky” or even “surreal” might do them a disservice, but both elements exist in Valley Fever, alongside a deep earnestness, a wry self-awareness and an engaged critique of everything she observes. As she writes to close the poem “UNSEASONAL”: “Once someone said love / turned off like a faucet. // I didn’t want this / to be that kind of party.”

New definitions of
doing poorly dewing
up on the face.
Not always facing up,
not always aware
of corners, sad
and lite-jazzy.
Aristotle says
thought by itself
moves nothing. No one
decides to have sacked Troy.
All the sounds are in miniature
but the room is large
in ruined light.

Constructed as a collection of short lyrics, Valley Fever presents a curious shift from the epistolary poems that made up her first collection, Letters to Kelly Clarkson. Given the book-as-unit-of-composition element of that prior work, it is tempting to read this new book not as a grouping of stand-alone poems but as a thoughtfully-conceived single work, and perhaps the real answer might be that this exists as a combination of the two. Somehow, her poems encompass an expansive curiosity, a healthy distrust of what she sees and knows, and manage to include just about anything and everything you can imagine, in a series of poems sketched as notes towards understanding how it is one can live, and be, better in the world. As she ends the poem “RIGHT OVARY, LEFT OVARY”: “I want to know all the things. / I want to know all the gods.”

On Locust Street with its low steps
I thought I saw a pastel hotel
settle its elbows onto the walk.
When I talk to you sometimes my tongue
bubbles out of my mouth—I wanted
to say forth but it doesn’t march, it starts
and stops. The mouth rooted and frothy, lit
with an everyday flavor. The string skips. Paul
Zukofsky’s violin stutters. L. says a way
not to feel nervous is to look at the eye.
Hopefully there is a salted sea when you
look there. Horses marching
under their hands. It’s never
going to happen.