Jennifer Moxley, There Are Things We Live Among: Essays on the Object World


In George Eliot’s The Mill on the Floss, wedding china likewise serves as a symbol of a woman’s things apart from those of her husband (though acquired through her marriage). When Betsy Tulliver’s husband is financially ruined, it is the thought of selling off her “silver and chany” that most aggrieves her, especially her silver teapot and sugar tongs. Should strangers, who know nothing of their value, buy them, they are certain to be mistreated and scratched.
Her heartbreak over the lost wedding china stands in for the larger failure—of a business, of a marriage, of a life. It is as if the dishes are the only thing standing between these women characters and the suffocating truth of how great a compromise marriage has asked of them. They cannot work to earn back such things, and their one bargaining chip—maidenhood—has long ago been cashed in. They have nothing else to barter. When the things go, the sacrifice made to acquire them seems for naught. (“Red Pickle Dish”)

American poet Jennifer Moxley’s There Are Things We Live Among: Essays on the Object World (Chicago IL: Flood Editions, 2012) is a series of short personal essays on objects and how they relate to us, and we to them. The pieces connect so well together that the book feels composed as a single unit, and the beauty of the collection is in how uncomplicated, straightforward, personal and wise these small essays are; how unadorned and readable, and deeply heartfelt and complex. Moxley’s thirty-eight essays work together to unfurl complicated ideas of self, home, family and belonging, expanding out into the entirety of history and literary ephemera even as she returns to the deeply personal. This is a book essentially about ideas, told through the perspective of an entire lifetime of reading, thinking and living. As she writes in the “Preface,” the book wraps itself around a quote by George Oppen.

As soon as I had my topic I had my title, knowing that I would write about George Oppen’s poem “Of Being Numerous.” I have always loved the way the opening lines, “There are things / We live among ‘and to see them / Is to know ourselves,’” connect “things” to both self-knowledge and structural assumptions. Oppen’s poem provided me a template for writing about how things define us, as well as about the politics of things, and how they function in literature and philosophy. He helped me to explore the paradox of living in a materialistic culture that yet exalts idealist philosophical and religious traditions. 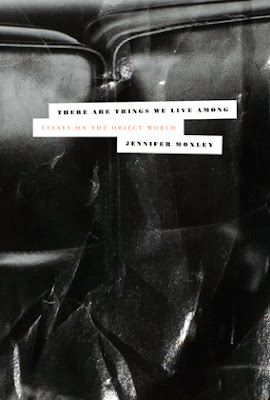 Moxley’s work is a complex one, requiring deep attention, rereading and very little interruption. We live in an object world, and Moxley navigates through what so many of us do daily, and with little thought. Moxley has an incredible attention to detail, as she writes about books, reading and living as a long, continuous thought, and the polyphonic effects of how we experience, understand and relate to the world. Her deep attention weaves through Balzac’s La Peau de Chagrin, her mother’s sewing machine, Edith Wharton’s Ethan Frome, Robinson Crusoe, George Eliot’s The Millon the Floss, her year in Paris as an au pair, Russell Edson, Proust’s The Search for Lost Time, Thomas Mann’s The Magic Mountain, the intimacy of clothes, Moby Dick, Walter Benjamin and the experience of clearing out her childhood home after the death of her stepfather. There is something of the short philosophical meanderings of writers such as Mark Kingwell and Alberto Manguel here, or even of Stan Dragland’s Journeys Through Bookland and Other Passages (Toronto ON: Coach House Press, 1984) and Apocrypha: Further Journeys (Edmonton AB: NeWest Press/writer as critic, 2005). Hers is a life lived through, in part, books, and Moxley’s pieces explore how it is we live in the world, how it has been discussed previously, and how certain things have changed, while others haven’t in the least. The fluid associations she makes are quite stunning, as is her fondness for the considered object, one thick with history and meaning, even if only her own.

For me fetishes and talismans have always been things not only removed from human labor (as is Marx’s point), but from any social value whatsoever (use, exchange). Unlike the diabolical specimens found on the forgotten shelves of curiosity shops, and handed, like poisoned batons, from imprudent owner to imprudent owner, my fetishes are ostensibly valueless items whose special meaning remains a secret between me and the thing. This is the only way to keep them safe from the nefarious machinations of those who live to shatter the illusions of others.
I have never bought or sold a fetish. All have come to me by chance, either as found objects or as gifts (but never as a ceremonious or wrapped gift, such as a birthday or Christmas present). When they arrive as gifts, they do so out of the blue, usually from someone I know but a little. An acquaintance who, by this gesture, suddenly seems to see into the very heart of who I am. The giver and I, once the gift has been given, will never be close friends. Too much is known already, and there is an understanding, a knowledge that would be destroyed by the quotidian banalities of cultivating a new friendship (telling our “stories,” planning cumbersome coffee dates).
The fetish is always something with little or no apparent value; that is until, having tucked it away in my purse or slipped it into a pocket, its magic begins to work.